Retired ROB-12866 RoHS Open Source Hardware 16
Note: Retired Product
This product has been retired from our catalog and is no longer for sale. This page is made available for those looking for datasheets and the simply curious. 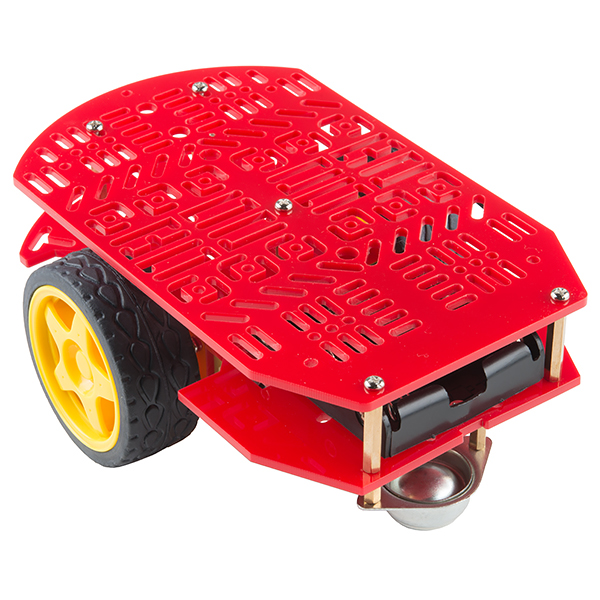 Retired ROB-12866 RoHS Open Source Hardware
16
Note: Retired Product
This product has been retired from our catalog and is no longer for sale. This page is made available for those looking for datasheets and the simply curious.

The Magician Chassis is our latest robot platform from Dagu. It features two gearmotors with 65mm wheels and a rear caster. The chassis plates are cut from acrylic with a wide variety of mounting holes for sensors, controllers, power, etc. Simply bolt the two pre-cut platforms together, attach the motors and caster and add your favorite robotics controller. This kit includes all of the parts needed to assemble the chassis as well as a 4xAA battery holder with barrel jack termination.

This new version comes with new hardware that matches what the instructions actually say is in the kit. No more confusing mix-ups or inconsistencies!

Note: The chassis requires assembly but has detailed instructions.

Note: We've released a new kit to replace the Magician, it is called the Shadow Chassis and it can be found here.

about 8 years ago by Member #631826 verified purchaser

Very easy to put together, and works well, though I've only just started out with it. At this price point even beginners can justify getting one to play around with simple robots. I offer the following constructive criticism: 1) the assembly instructions are ambiguous about how to orient the motors and route the wires from the motors to the battery; 2) you have to remove the top plate (which involves removing 5 screws) to change the batteries, and 3) the battery plug is too large to be routed through the cutouts in the upper frame, so it has to be run up and around the edge of the robot.

Works, but quality control is low and design is flawed

about 7 years ago by Member #619605 verified purchaser

This does work - don't get me wrong. But even the picture of it shows the battery case being on the lower platform, where changing batteries is impossible - you would have to take off the top level every time, which is essentially every time you want to use the robot. The posts that hold up the motors in place have a large variance, so about 20% of my kids (I bought 24 of these for a class) had a lot of trouble getting the bolt to fit through two posts and the motor; 1 person could not make it work no matter what we did and we ended up just duct taping it together. Looks like crap....

There are a ton of holes on the top layer (see picture) which should make it really easy to find a way to bolt something on just about anywhere - I like this idea a lot! - but oddly it just doesn't work. The Raspberry Pi B+ could only be bolted on with all 4 bolts in about 2-3 places on the entire board. And with the need to put the battery case up with the Pi on top, this made configurations really awkward or impractical. Again, Duct Tape to the rescue, which is fine but I really prefer the "bolt on" approach and know that the thing will stay - not that this robot will be experiencing big g-forces or anything.

With the battery case, the screws provided stick out of the bottom of the battery case enough to make it difficult to put the batteries in. A different screw or a better battery case would solve this easily. And, like the Pi, it was actually difficult, despite the seemingly endless combinations of the holes, to find good spot for the case where the screws could go straight down rather than at an angle to "force" the screw into the hole.

Lastly, the wires from the motor were too short. With a Raspberry Pi and a RaspiRobot Board V2 as the motor controller, you really want all that up front so the sonar is unobstructed and in front. When you do this, the wires from the motor almost but don't quite work. By duct taping the Pi a little farther back, you can make the wires stretch, but again you are compromising where you really want something because of a limit of the chassis design. Another solution would be to run the robot with the roller ball in the front (then the wires reach just fine) but now you are pushing the ball rather than pulling the ball, and the robot will not be able to clear obstacles as easily.

In short - good cost and great concept, but for a Pi, the details are just not worked out. Still functional - with one exception we were able to make everything work - but with a little thought this could be a much more convenient and sharper looking chassis for a Raspberry Pi. Maybe it works better with other electronics?

about 7 years ago by nsa verified purchaser

the price is nice.. easy assembly, compatible with Arduino and others.

about 8 years ago by Member #627674 verified purchaser

I placed an order of over 200 dollars with sparkfun and everything but the magician chassis (and backordered parts that I don't yet have) arrived fine.

The bottom plate arrived cracked in multiple places both radially and longitudinally for substantial distances (in one place half the width where the motors mount). I'm sure it won't work correctly once powered and I plan to use acetate solvent and reinforcement strips so the robot reacts correctly.

It's very cold here on the east coast and the chassis was at the bottom of the box, so I believe this was not a manufacturing defect but a case of careless packaging which led to cold plastic cracking in shipment.

Since this was for a robotics class and shipping time to the east coast is substantial, I did not have time to go through the process of trying to get a replacement.

I am extremely disappointed.

Very sorry about this issue. We would be more than happy to help you if something gets damaged in delivery. Please contact our returns team for more assistance. https://www.sparkfun.com/returns

Spiffy looking! But: challenges with battery case and motor orientation

about 7 years ago by Member #439214 verified purchaser

During our Northeast Blizzard today I found some down time to put the chassis together. Looking very spiffy! I also had some challenges with the battery case. And I also had a question on the orientation of the motors. I just went with what the pictures in the assembly instructions had. Basically (looking at the rear of the motors ) the flat sides of the motors are facing each other. That's how I mounted mine, anyway. The result is one motor having the sticker showing. I'm assuming this is the correct orientation. Guess I'll find out when I test!

One of the best things I ever ordered

about 7 years ago by Member #645153 verified purchaser

I am a very new costumer and I'm 11 years old, and I order this with breadboards and battery pack and diodes and the ac adapter, not knowing it came with two of those, But it came in 4 days, and it works very well. One of the motors are faster than the other an one of the axles wont stay on.

about 7 years ago by Member #505914 verified purchaser

Sparkfun is a company that I know I will frequent more often. They were very helpful and attentive to my son's project needs.

a box of awesome for a cheap price

about 7 years ago by Member #192033 verified purchaser

just add arduino and take over the world

Very satisfied with only one minor issue

about 7 years ago by martin_timmerman verified purchaser

We are very satisfied with the chassis. The only little things is that we would like some more space between the 2 boards.

about 7 years ago by Member #105868 verified purchaser

I've been using this product for almost three years to give clases, its the best for its Price, great deal for teachers.

Like some people comment here, some chasises have a Little issue with the motor support somethimes the part doesent fit well, and that causes in rare cases to the student to break that part.

Other that that the Price, the quality its amazing very reccomended and as long as Sparkfun holds this product i will continiu to buy it.

Now i have a laser cutter and i can make some spares.

about 7 years ago by Member #458084 verified purchaser

Hi guy's! It is working fine right now. At the moment it is running back and here there and everywere, on my floor, as a self going two wheeler. I am using an Uno and a distance sensor, right now.

about 8 years ago by Member #629512 verified purchaser

Simple and easy to assemble this basic chassis can carry several boards for a variety of projects. The motors have gearboxes already attached, and the screws and spacers make it easy to assemble and disassemble as needed. With a motor controller you can change the speed and direction of each wheel, allowing you to control turning radius at various speeds, without dealing with steering linkages. This is the best starter chassis I've been able to find.

about 7 years ago by Member #633050 verified purchaser

Really having fun with this chassis, along with my arduino board, motor shield and ultrasonic rangefinder. I plan to try out more sensors and programs in the future.