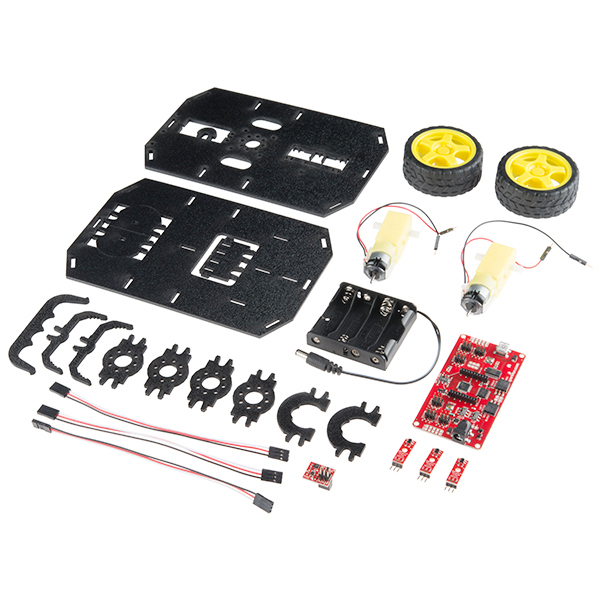 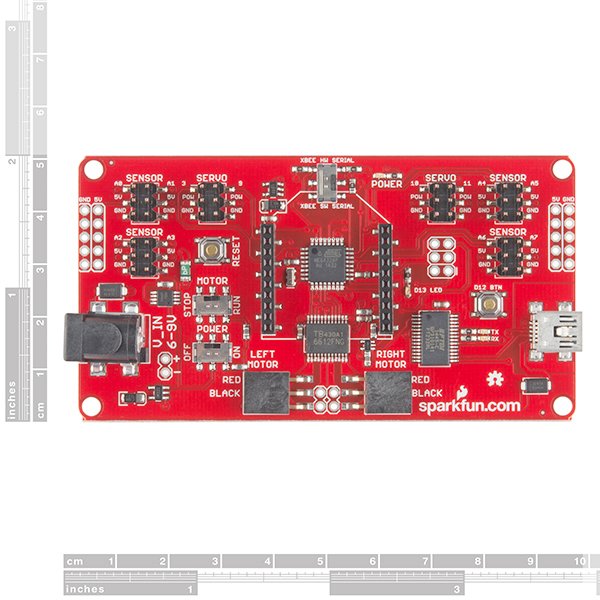 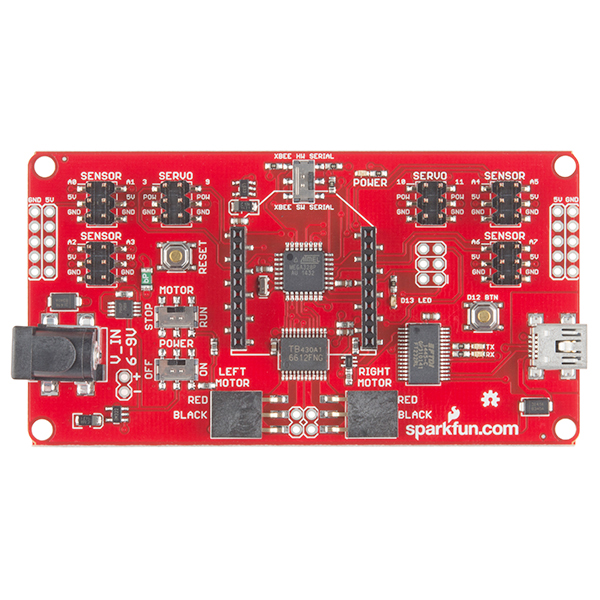 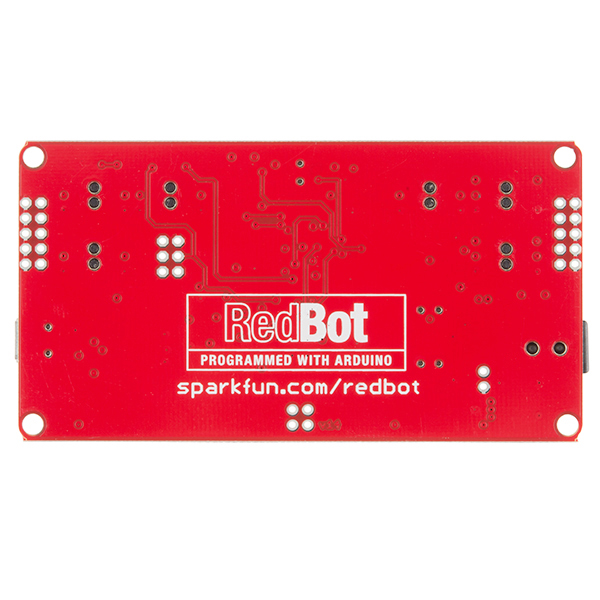 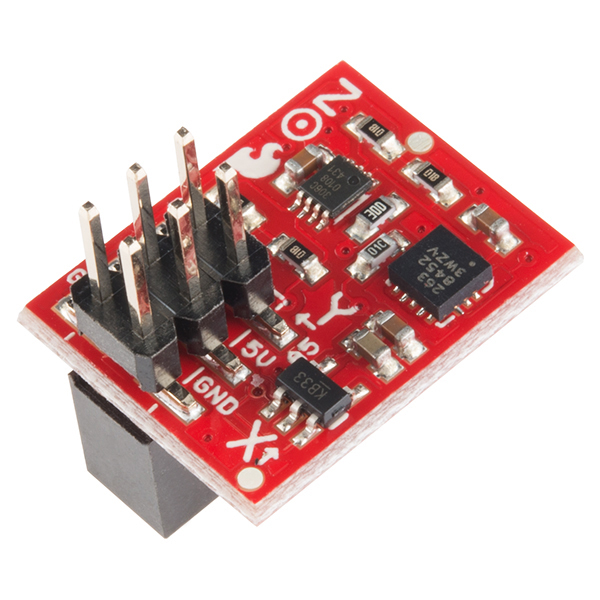 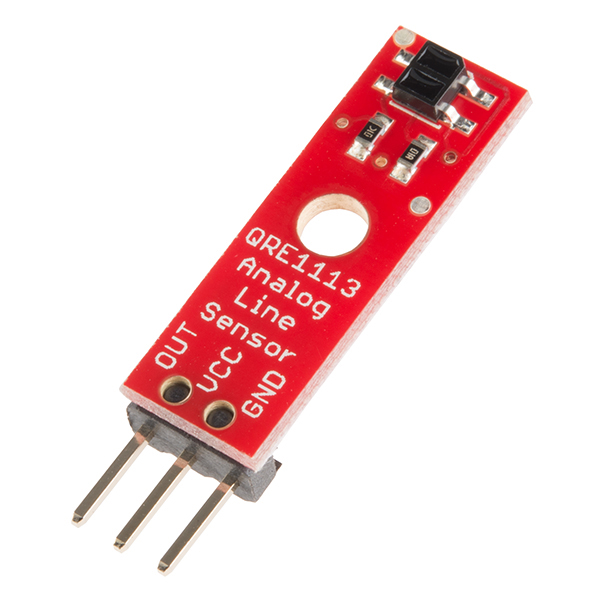 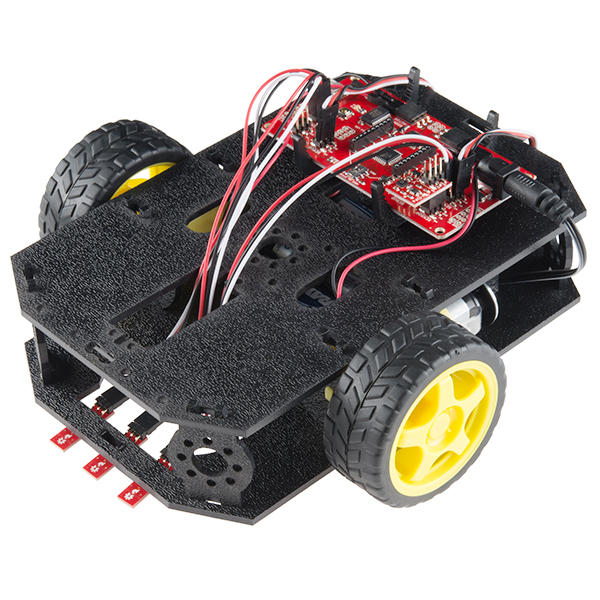 Welcome the RedBot Basic Kit, a robotic development platform capable of teaching two motor robotics and sensor integration! This kit comes with our RedBot Mainboard, the Shadow Chassis, a handful of sensors, and everything required to get it moving.

The RedBot Mainboard is a modular robotic development platform that works with the Arduino IDE. The RedBot is a motor driver and Ardiuno combination with various headers and connections, eliminating the need to stack multiple shields to get desired functions all on one board. By simply connecting a USB mini-B cable, you can program it in the Arduino IDE using our example code, or your own.

The Shadow Chassis is an economical robot platform with a lot of versatility. It features two gearmotors with 65mm wheels and a caster. The chassis plates and mounts are cut from ABS plastic and utilize the Actobotics 0.77" and 1.50" hub patterns for sensors, controllers, power, etc. Simply snap each panel together and you’ll be able to attach everything in no time by simply snapping the parts together! The chassis does require some basic assembly but detailed instructions can be found in the Documents section below.

Rounding out the group are three Line Follower Sensors and one Accelerometer Sensor. The Line Follower sensor gives your robot the ability to detect lines or nearby objects using infrared light. The Accelerometer sensor provides bump and motion detection by measuring acceleration forces on the x, y, and z axes.

The RedBot Kit won't be able to operate on Mars but it will definitely fuel your curiosity about robotics!

Note: This kit ships without batteries. You will need 4 AA batteries to get rollin'.

Note: The Experiment Guide in the Documents section below includes full example to code to get your RedBot functioning and moving as quickly as possible.

Assembly Guide for the RedBot Kit. This tutorial includes extra parts to follow to go along with the RedBot Inventor's Kit tutorial.
Favorited Favorite 13

Control the RedBot wirelessly based on the movement of your hand using an accelerometer, Arduino, and XBees!
Favorited Favorite 11

Versus Previous Redbot: Some Pluses and Minuses

about 7 years ago by Rud verified purchaser

I have one of the red Redbots from a year or so ago. Today I did a class using the current Shadow 'bots.

The assembly of the new version went really well. I'd allocated a number of hours to get it put together but the two students - 14 year olds - completed it in just a couple hours.

We then tested the units. The motors worked fine. I'm not happy with the IR line sensors. They are not firmly mounted so wiggle both vertically and horizontally. The vertical movement is enough to make a change in the analog input reading. More importantly, they are quite a bit higher than those on my other 'bot. On a white surface my original 'bot gets readings of less than 100. The Shadow version gets white readings over 500 and sometimes over 600. Under the conditions we were running the 'bots that was sufficient since black readings were over 900. But under less ideal conditions this may be a problem.

I should mention that the red versions sensors are a bit low. I've seen them hang up on black tape that has a bump or bubble.

Also note the Shadow version is significantly wider than the red version. I had to adjust the test track so they wouldn't run off the edge of the board.

The kids are satisfied and the units work fine. But be aware that the IR sensors may be sensitive to the running environment.

about 8 years ago by Member #635394 verified purchaser

The RedBot is a cool kit. It's simplicity of use especially being able to readily upload the code makes the RedBot a powerful introduction to programming and robotics. One change I would like to see is the ability to write code instead of relying on the libraries. For example, rather than using the libraries it would be helpful to know what ports the motors and other sensors are linked to on the main board. Other than that, great kit. I will be purchasing them again.

The Redbot is getting much better

about 7 years ago by Member #21808 verified purchaser

I purchase these for our college mobile robotics course, the ones I got for last year were so fragile and broke when the students were handling them. This years version (BlackBot) is much better and easy to assemble and disassemble as needed. There is good hole support for servo and sensors, the servo hole is a nice size to fit pretty much any standard servo, we CNC'd our own servo adaptor plate for the mini servos. It would be nice if the motor speed encoders were included in the kit - These are also much better this year. Wire routing management could probably be improved to give the robot a better appearance.

about 6 years ago by SHanford verified purchaser

This is such a great tool for my students to use while learning robotics. Nothing is hidden, all the guts are exposed and practically everything can be tinkered with.

about 6 years ago by Member #854422 verified purchaser

i am trying to learn about robotics and this is serving as a very good way to learn to build my own autonomous robot.

about 6 years ago by Member #869951 verified purchaser

Easy to set up, fun and well thought out experiment guides that get progressively more challenging.

Only thing that could be improved is the documentation for getting the Arduino IDE up and running has drifted a bit from the latest versions. Was simpler to just install from the Arduino website and google how to get the board set up.

Great for teaching a first timer!

about 6 years ago by MVaerewyck verified purchaser

Used this to get my Nephew excited about programming, robots, and micro controllers. After snapping the pieces together, we loaded up the code and starting playing.

Within 15 minutes he was coming up with all sorts of ideas that he wanted to try! After 25minutes he was pushing me aside because he'd gotten the basic idea of how to program it and wanted to do it on his own! GREAT!