Retired WRL-13990 Open Source Hardware 9
Note: Retired Product
This product has been retired from our catalog and is no longer for sale. This page is made available for those looking for datasheets and the simply curious.
Note: Notice. This product requires other products in order to function properly.
See essential products. 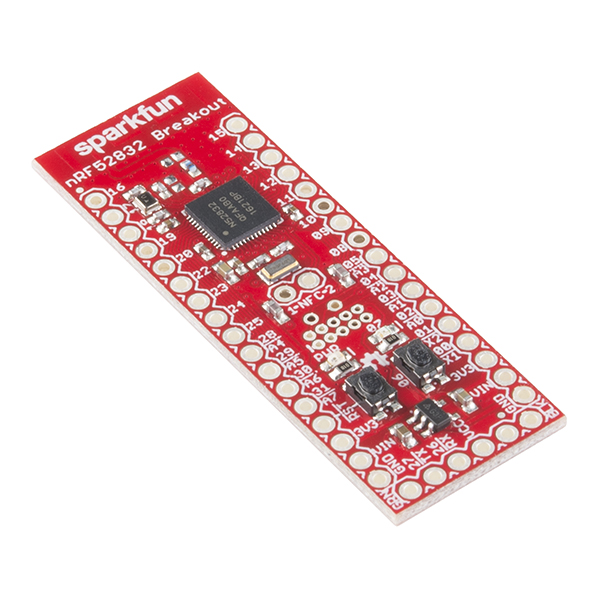 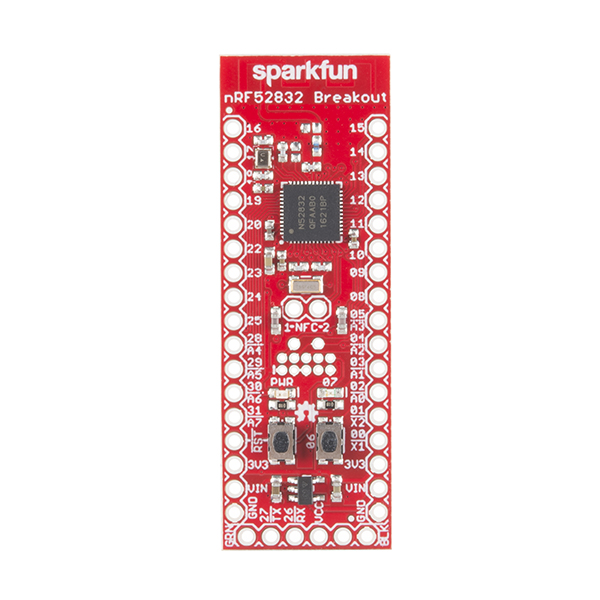 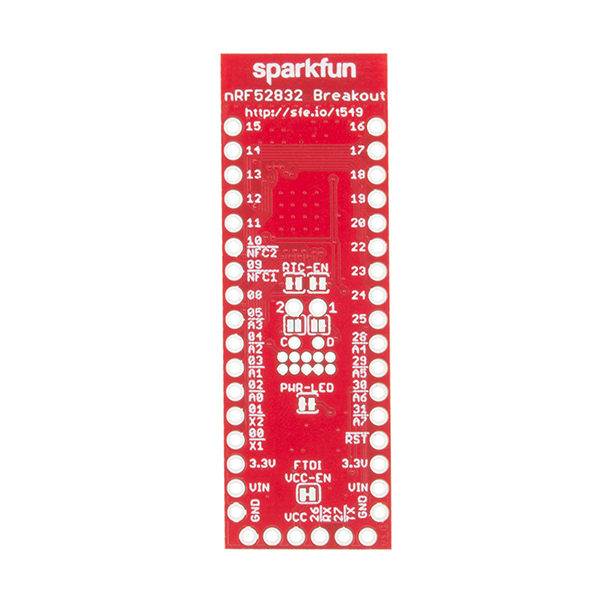 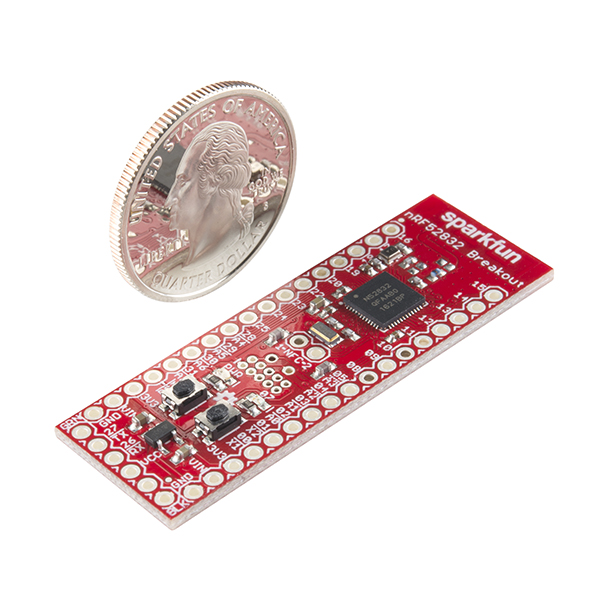 Retired WRL-13990 Open Source Hardware
9
Note: Retired Product
This product has been retired from our catalog and is no longer for sale. This page is made available for those looking for datasheets and the simply curious.
Note: Notice. This product requires other products in order to function properly.
See essential products.

SparkFun’s nRF52832 Breakout provides easy access to all of the chip’s features. It breaks out all of the nRF52’s I/O pins, provides a 32.768kHz RTC crystal, a user-programmable button and LED, and a trace antenna to send and receive those 2.4GHz transmissions. Plus, to make the chip as easy-to-flash as possible, the breakout comes pre-programmed with a serial bootloader.

Nordic’s nRF52832 is an SoC that combines an ARM Cortex-M4F microprocessor with a 2.4GHz multiprotocol radio. In addition to providing access to all of the chip’s I/O pins, the breakout board includes a handful of external components. The nRF52832 can operate on a power supply between 1.7 and 3.6V. The board also includes a 3.3V regulator with a maximum input of 6V, if you want to power the board with batteries or a regulated wall supply.

Get Started with the nRF52832 Breakout Guide

How to hookup and program (in Arduino!) the nRF52832 Breakout -- a development board for Nordic's BLE/ANT/2.4GHz system on chip.
Favorited Favorite 6

Looking for the nordic SDK guide?

If you are having trouble getting the nRF52832 Breakout into bootloader try placing the board on a non-conductive surface (or plugged into something like a breadboard) and then either make sure your fingers are ONLY touching the buttons or use something like tweezers or even a M/M jumper wire to press the buttons. This results in much more consistent behavior getting this board into bootloader mode.

This is not compatible with Windows XP.

about 6 years ago by Member #873701 verified purchaser

Great board. It works well and it is easy to program using SWD and the Nordic DK which I previously used for development. I suggest buying a breakout board like this before thinking your firmware is complete. It turns out aspects of my code that worked on Nordic's DK did not work with this breakout. I was therefore able to fix my program before starting the design of my own PCB. I've been working with nRF52 for my senior year project as an ECE and this product and additional files have been excellent resources.

about 6 years ago by Member #559083 verified purchaser

This is a good board, it does exactly what I need. It was almost trivial to get the Bluetooth up and running, and control a stepper motor controller through it (which also leverages SPI libraries). I've not tested I2C.

The SparkFun Arduino IDE plugin made it simple to get started and accomplished all of the above. My only complaint is that it doesn't include a straightforward flash access functionality from the nRF SDK out of the box. This would be handy for accessing flash without having to do a lot of research. I spent a few hours deep-diving into the SDK, which has half a dozen ways to access flash with various configurations that may or may not work depending on how the device is configured. The best option would be if they could add support for FDS, which is a record-based filesystem driver in the nRF SDK, but it has a fair amount of dependencies and requires understanding of the SoftDevice that might need to be abstracted away for the average Arduino user. nrf_nvmc on the other hand is pretty simple and standalone, and doesn't require any SoftDevice config. You just read internal flash directly from memory addresses and write to addresses in bytes or words using the library functions.

While they do provide their bootloader code, it would also be nice for noobs if they provided their procedure for installing the bootloader to a new chip. I buy from SparkFun for prototyping, but ultimately I want to make my own board. If I want it to work like this one, I do have the Nordic docs regarding bootloader installation, but I'm going to have to do some trial and error to figure out the options they used when flashing the bootloader package. UPDATE: I found their procedure in the Makefile located in the bootloader source repo: https://github.com/sparkfun/nRF52832_Breakout/blob/master/Firmware/bootloader-custom/sparkfun/dual_bank_serial_s132/armgcc/Makefile -- "make flash_softdevice".

ONE WORD OF CAUTION - This device by default is capable of being powered by the serial interface. Unfortunately, the power from this interface does not go through the VIN voltage regulator as one might hope. It goes directly to VDD, so be sure you use a 3.3v serial adapter. I literally caused the nRF chip to smoke and bubble a bit by using a serial adapter configured for an Arduino at 5V. Luckily (perhaps amazingly), nothing got damaged before I noticed my mistake.

about 6 years ago by Member #789910 verified purchaser

I like that the breakout board has the nrf52 on it with all the I/O broken out. Super helpful! It worked out good for the project I was on but it lacked a good 3.3V regulator. The 3.3V regulator Vin max was 6V. I really needed something that could work with Li batteries at around 7.2V. I had to put a different regulator on the board that I thought was pin for pin compatible but the Sparkfun schematic was incorrect for this part and needless to say caused irreparable issues to a board before I caught the difference. The board should really use the TPS76933DBVR regulator. Goes up to 10V!

Really having fun with this. Works as expected.

about 5 years ago by WWE verified purchaser

It was super tough setting up for C after the bootloader just disappeared, but I wasn't much interested in BL. Not much help for using C with this part. I am using the Segger Studio (which is free for Nordic parts, yay!) and a J-Link EDU. I see there is a $20 Adafruit J-Link EDU. I am using the Nordic SDK but it is specific for Nordic dev boards, what a pain in the butt. Not only that, Segger has a SDK for this part auto installed as well. Have to be sure I am not mixing SDK's (like headers). I got it working though, but big learning curve. I plan to clone and extend the Arduino libraries in Git, so you can do stuff besides BLE and gpios.

Challenging board to use ...

about 5 years ago by Member #496520 verified purchaser

I was working on a project that was using the RedBearLab BLE Nano v2. When I finished the prototyping, I went to order the quantity I needed for deployment, but found that they were discontinued. (Ugh!) I looked to this board to replace the RedBearLab parts, but this board (while hosting the same Nordic chip) is much more difficult to use.

I am hopeful that I can find a way to port my BLE central application to this board, but I was disappointed that the hookup guide ignores the "central" role that this board is capable of.

about 4 years ago by Member #103624 verified purchaser

I needed a Bluetooth LE device that was compatible with the Arduino GUI. Well based on my reading this was the best choice for low power and Arduino interface support.

However, my project is for a Bluetooth device in Central mode not in Peripheral/Server mode. Unfortunately I have not been able to find a suitable nRF52832 Arduino library for Central mode. AdaFruit nRF52 libraries appear to support Central mode but are only available for their devices. Unless there is a hidden Central mode library out there; this project is at a stand still.

So I am back where I started, uncertain how to accomplish my project in the Arduino GUI.

I look forward to putting the SparkFun nRF52832 to use in a different project... Some day.

The nRF52832 is a very robust chip, and this breakout board makes it extremely easy to get started prototyping with it. It's got a nice set of features, and of course - excellent Sparkfun documentation!

Nice breakout board, but useless without external programmer

about 6 years ago by Hans H?bner verified purchaser

The serial boot loader does not really work. I could use it to program the chip once, but after that, the button press procedure no longer works. I biught the Nordic developlment kit as external programmer, but I would have preferred not to be mislead by the mentioning of an internal boot loader as it is not useful for repeated programming during development.

Sorry to hear about the trouble with the nRF board's bootloader. Have you contacted our technical support department over at Techsupport@sparkfun.com - they may be able to help out with setting the board back into DFU and bootloader mode so that you can upload without an external programmer.