Retired WRL-08742 RoHS In Fritzing Library In Eagle Library 10
Note: Retired Product
This product has been retired from our catalog and is no longer for sale. This page is made available for those looking for datasheets and the simply curious. 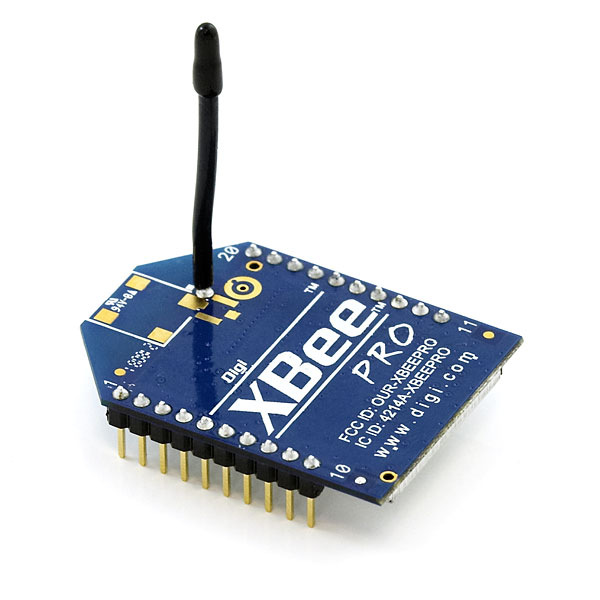 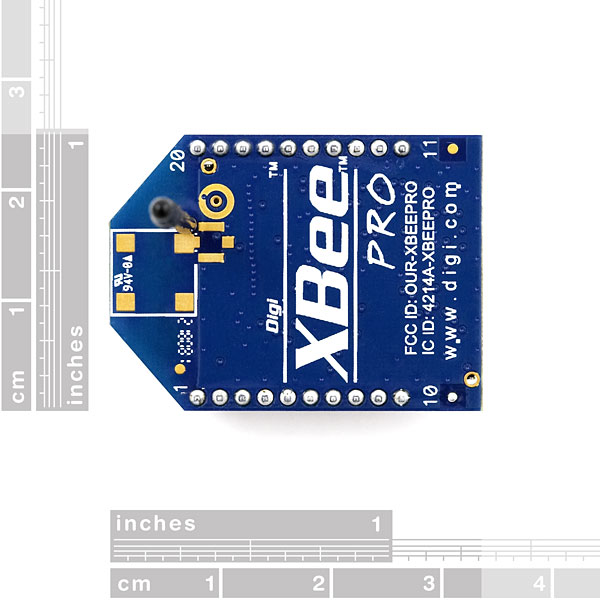 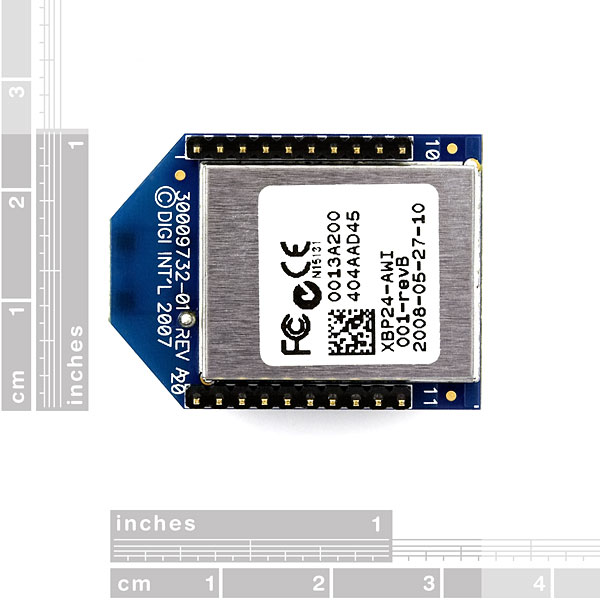 Retired WRL-08742 RoHS In Fritzing Library In Eagle Library
10
Note: Retired Product
This product has been retired from our catalog and is no longer for sale. This page is made available for those looking for datasheets and the simply curious.

This is the very popular 2.4GHz XBee XBP24-AWI-001 module from Digi. The Pro series have the same pinout and command set of the basic series with an increase output power of 60mW! These modules take the 802.15.4 stack (the basis for Zigbee) and wrap it into a simple to use serial command set. These modules allow a very reliable and simple communication between microcontrollers, computers, systems, really anything with a serial port! Point to point and multi-point networks are supported.

Not sure which XBee module or accessory is right for you? Check out our XBee Buying Guide!

Note: If you are using these outside of the United States, please check with your local laws regarding radio communication.

This Experiment Guide offers nine experiments to get you started with the SparkFun RedBot. This guide is designed for those who are familiar with our SparkFun Inventor's Kit and want to take their robotics knowledge to the next level.
Favorited Favorite 10

In this tutorial, we will expand on the SIK for RedBot to control the robot wirelessly with XBee radios! We'll explore a different microcontroller and wirelessly control the RedBot at a distance.
Favorited Favorite 6

about 7 years ago by Member #127179 verified purchaser

Get this rather than the cheaper one with limited range. You won't be sorry, unless you never intend to have your XBee pair out of the same room. Who needs the potential for irritation?

Note that they come configured out of the box to work. You can change things if you want later, but play with first rather than confusing yourself with all the set-up guides running around. If you decide to reconfigure, note that there are an older version of the software needed (X-CTU), and a brand new version. I suggest the older version, as most on-line guides seem to refer to that one.

You will need a shield if using with an Arduino, and another device if communicating with a desktop via USB -- the USB will provide the power for the XBee as well as the link into your computer. On the Arduino, power comes from it.

Note that many of the examples I've seen use the software serial library, which is helpful so that you don't have to worry about unplugging the XBee while uploading sketches to your Arduino. Note that when setting the jumpers on the shield.

For communication with a PC desktop, download the free "putty" terminal program.

As for power draw, I've run mine on both an UNO, and an Edison -Arduino breakout board from batteries with no issues whatever.

about 7 years ago by Member #619622 verified purchaser

I was using a non-Pro Xbee and it was intermittent at the distance I was using it at. The Pro works much better.

about 8 years ago by Member #591147 verified purchaser

I've used this radio to get extra range that I couldn't have with a simple xbee holding a ceramic antenna. I was forced to put the receiver in a metal box for my project needs. this did not however hinder a reception at 300 meters range.

about 6 years ago by Member #170380 verified purchaser

I had two of the 1mW devices and the range was nothing like claimed. Mind you I am working from a few inches of the ground and the spec is for 'mountain top to mountain top'. So I got these for my AVC entry. I have not figured out the range in my situation, but its at least 300 feet. Very good for my purposes. Everything else works great.

Reliable as a good ol' husband

about 6 years ago by Budhabar verified purchaser

Been working with lots of the S1 series using the DigiMesh Firmware.

They are just reliable. Reliable, reliable.

about 6 years ago by Member #855741 verified purchaser

I have received your products, and work so good.

all Ok thank you very much regards Franco Cappiello

It's been lots of fun

about 5 years ago by Member #418097 verified purchaser

I don't know much about electronics, but somehow I can still learn through sparkling.com

Tutorials are well made, discussion forums are informative too.

It really lived-up to its specification

about 7 years ago by Member #1373 verified purchaser

I connected it to the xbee explorers, computer and arduino started to communicate. just like plug-n-play

best thing i ever owned

about 7 years ago by Member #724783 verified purchaser

i knew that xbee pro is the most popular GHz module for long distance communication and its very easy to use it.