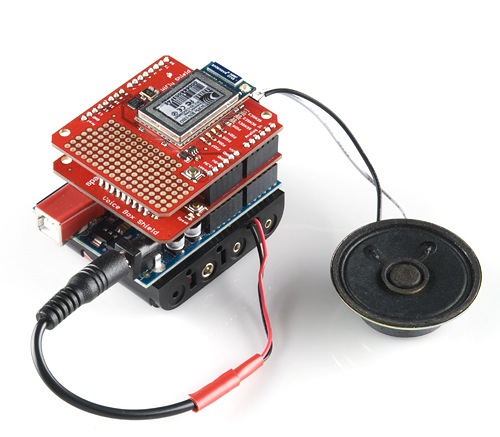 
This project started with two goals. First, to demonstrate the capability of the WiFly module, and second,  to interact with hardware from a browser in a unique way.  We already had the Tweeting Kegerator tutorial, which allows the hardware to post metrics over a wired network connection, so for this project I instead wanted the network side of the project to affect the hardware in some interesting (and of course wireless) way.

With that in mind, let me say up front that up until now I had no experience with either the SpeakJet chip or any sort of embedded network/wifi devices.  In this tutorial I'll lead you through my thought process as this project developed. I also include four, count-em four, example Arduino sketches. Each one is a different milestone in the project, so you can pick-and-choose examples without unnecessary code. The sketch for the whole project is at the bottom of the page.


Goal the First: Get Talking to the WiFly


The WiFly GSX Serial Module from Roving Networks has a very simple serial command interface. To access most of the features of the device, all one needs to connect is TX, RX, VCC, and ground. For this project I started with a WiFly Shield and an Arduino Duemilanove. The WiFly shield does not actually communicate with the Duemilanove using the UART, but has a SC16IS750 SPI-UART bridge that is more complicated to deal with than simple UART communication, but allows for a much higher baud rate if one wants to communicate with the WiFly at higher-than-115200 baud speeds.

The first task was to initialize the SC16IS750 SPI-UART bridge chip in order to transparently communicate with the WiFly through a terminal. This is a short series of SPI register writes:


This snippet of code configures the SC16IS750 to 9600 baud (the default rate of the WiFly), enables the communication FIFO, and then tests the SPI communication by writing to and then reading from the chip's "Scratch-Pad Register" (SPR). If this test fails, the code will hang the Arduino in a while(1).

With the communication rates set, I wrote a simple polling loop to check the line status register (LSR) of the SC16IS750 and print any characters it receives. If no characters are available, it checks the Arduino Serial buffer for new characters from the terminal and sends them to the SC16IS750. An Arduino sketch of this can be found here:

Then it was time to start digging into the WiFly User Guide (more recent version). My first task was to get the WiFly to associate with our wireless LAN at SparkFun. All commands to the WiFly are executed in command mode, which is entered by sending the characters "$$$" to the device. So I fired up the Arduino with the wifly-basic sketch loaded and typed "$$$" into TeraTerm. The output was:


Now the device is in command mode, and it looks like the WiFly is automatically attempting to associate to an open network. I need it to associate to the SparkFun network, but all I have is our WPA password which I got from our IT guys, so I use the "scan" command to see information about the available wireless networks:


Now I know the security type and name of our wireless LAN. By default, the WiFly is not configured for WPA encryption, so I change that with the command


This changes the Authentication Mode of the device to Mixed WPA1 & WPA2-PSK. I use a similar command to set the password: 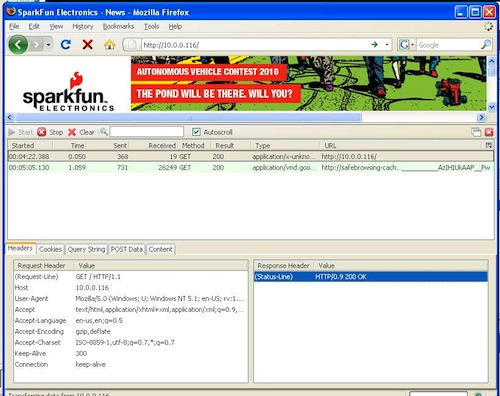 Goal the Second: Get the WiFly Talking Back: