I would like to tell you about my two day HAB adventure in hopes you can learn from some of my successes and failures. I'm not going to outline my entire process, a more detailed HAB tear-down from a different launch was covered in the SparkFun HAB tutorial series.

In late July of 2011, Natalie and I set out to Ault, CO to launch my first HAB (dubbed S1). Natalie, being my supportive girlfriend, tagged along to help and was enthusiastically ready to watch me fail. 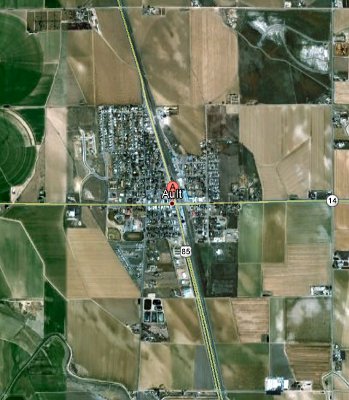 As we arrived in Ault, I quickly realized Google Earth makes things look waaaay bigger than they really are. I thought Ault City Park was at least a grassy field, but after 5 seconds of searching the city from end to end, we found a sign for 'East Ault City Park', which turned out to be a dirt pile next to some warehouses. 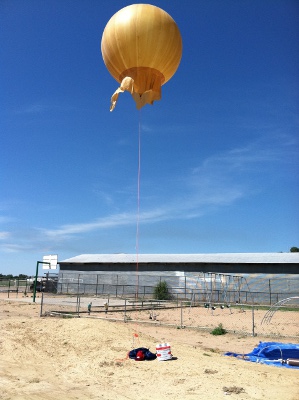 The balloon I used was the cheap military type you can find on Ebay. However, the balloon didn't come the way it looks in the picture above. What I did there was cut off a huge flaccid piece of rubber from the underside, making the inflated balloon much lighter with more lift. Having no idea what I chopped off, but feeling good that nothing was leaking, we continued inflating the balloon. 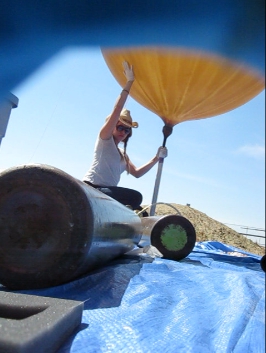 This is a shot from my camera inside the payload box with two 125 ft^3 helium tanks in the foreground and one Natalie in the background.
Filling the balloon is a delicate process. The lack of grass and searing 100+ degree heat in Ault City Park didn't help the fact you must keep the balloon from touching anything sharp or dirty. We used a tarp on the ground to keep the balloon off of the dirt, which increased the surface temperature by about 15 degrees. We used plastic gloves to keep our hands nice and warm (also to not get deadly hand grease on the balloon).
Most importantly, you don't want to fill the balloon with too much He because the balloon will not reach its full height (hopefully ~90,000 feet) and will pop too soon. If you fill the balloon too little, you might not have enough lift to reach full height. Make sure you fill the balloon with just enough He to provide lift for your entire setup.
Here is a rough calculation:
I used about 175 ft3 of helium to fill the balloon. 1 ft3 of He has about 28 grams of lift, so 175 ft3 has about 4900 grams of lift at sea level, slightly less at higher elevations. The balloon weighed about 2280 grams after my epic modification, and my payload weighed about 2500 grams (be sure to include the weight of everything in this step). Combined, this is less than the free lift of the balloon, 4900 grams.
Before we let this thing go, let me talk a bit about the parts I used. 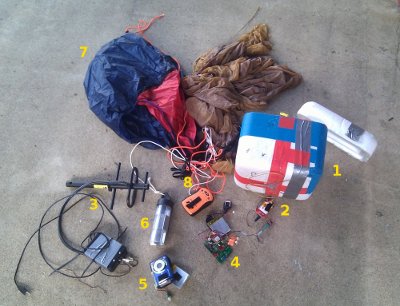 Here is a picture of my entire setup. This is everything that went up with the balloon (except for item 3).

The Flight and Recovery

Here is what my flight computer was reporting as I let it go:

$(number of satellites),(time),(latitude),(longitude),(altitude from GPS),(altitude from pressure),(temperature),(heading),(acceleration),(one sec tick)@
From the start, my accelerometer and pressure/temperature sensor were not working (had to be something with the I2C communication). I had bugginess with the pressure/temperature sensor during testing, but never the accelerometer, I swear. Both of these sensors are not critical, so I let it fly.
I actively tracked the balloon for about 20 minutes before the GPS started to lose its lock and other sensors starting failing. It wasn't until about 40 minutes into the flight before I completely lost radio contact. In the 40 minutes, I did get some really interesting data.  The entire time the payload was spinning mad. The heading was all over the place and the number of satellites was changing indicating the GPS antenna was possibly moving considerably.
As soon as I could not track the balloon with my radio system, I tried to get an internet connection to look at my SPOT locator. Luckily Natalie's phone uses Verizon, so I was able to get spotty internet out in eastern CO. My TMobile couldn't find even find a cell. 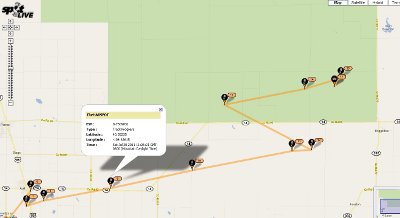 We continued to track using SPOT and eventually ended up in the middle of the desolate Pawnee grasslands. The track shown above shows the complete flight, according to SPOT.

Here are the last three tracks I received from the Spot locator. This was really weird because the last waypoint is a 'Check-In' message, which means that one of the buttons on the unit was hit! I assumed this meant there was a crash landing. However, I wasn't completely sure if this was the true landing point or not, since the Spot locator does not give elevation. Regardless, we immediately went to the last waypoint. It took us about 30 minutes to hike to what we thought was the landing. Our searching was not successful, we ran out of water, and it was getting late. We returned to the car completely tired from driving and hiking all day in the heat. We decided to go home and analyze the positions I had recorded from the SPOT locations, where we searched, and the data I received from the radio.
Once I got home, I calculated the time of the flight and it closely resembled the modeled flight (habhub.org). I then made sure the 'Check-In' notification was in fact due to a button hit. Also, I found out, after looking over maps and GPS positions, we were searching in the incorrect spot, we were about 500 meters off. After I figured all of this out, I realized I had to go back the next day and do a better search. 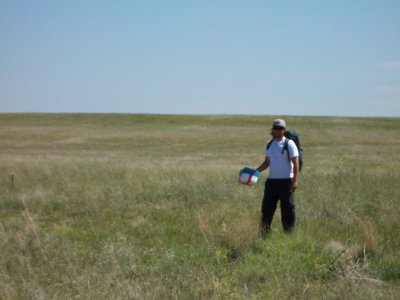 The next day I drove up to the Pawnee and headed directly for the spot where I now thought it was located. After about 30 minutes of walking I saw the payload in my binoculars, success! The picture above shows you the conditions I was searching in, dry, hot, barren grasslands. Actually, the grasslands are anything but barren. To the naked eye, you see nothing, but look through some binoculars and there is wildlife EVERYWHERE. I kept thinking the white rumps of the pronghorns and antelope were the payload box.
When I found the payload, I was so excited I forgot to take pictures and I immediately ripped open the box to see what was on the camera only to be completely disappointed that I didn't capture the entire journey. I did notice that when I approached the payload, the flight computer, GPS, and radio were all ON and working! The parachute wasn't tangled and the payload box had a small depression on the corner and that was it. It didn't seem like a hard landing at all! 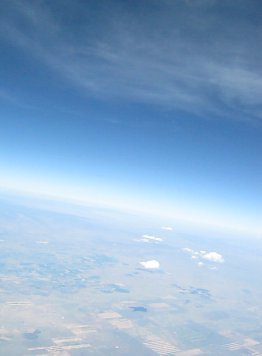 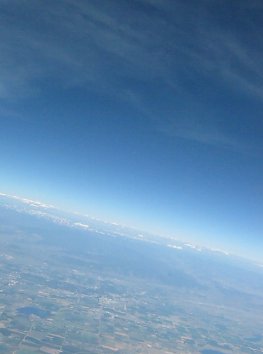 The best shots I got from the video (sorry, crappy resolution). You can somewhat make out the Rocky Mountains in the right image.
Unfortunately, the camera cut out at about the same time as the radio and I am not sure why. Maybe the low temperature was affecting the batteries? I didn't use a heater. The pictures above were the best I got and are at about 9,000-10,000 meters or 30,000 feet. No better than the shot you get outside of your airplane window.
The surprises didn't start revealing themselves until I looked at the OpenLog data.
The first thing I noticed is that the main board computer kept running through the entire journey, however everything else seemed to be out. Surprisingly, the GPS cut back in at about 2000 meters (about 600 meters above ground)! This was very interesting, since now I could see how fast the payload hit the ground. I calculated about a 3-4 m/s descent rate during that time, which is about what is expected with a working parachute. The accelerometer, pressure and temperature sensors were dead the entire journey, so the only data I had to work with was GPS, heading, and time.

The next thing I found was a lone waypoint from the GPS cutting in at about 19,000 meters (about 60,000 feet)! No way! This also happens to be about at the ITAR elevation limit for civilian GPS.
But where was this lone waypoint logged on the trip? Did the balloon go higher?
I started analyzing the data more. I immediately noticed the GPS position was not correct. Hmm. I found out there was a bug in my code, so that all of the longitude and latitude values were off by a factor (simple bug in my parsing that didn't show itself until a move in coordinates). It didn't matter, because I had a time stamp and heading data. I compared the time stamps with the SPOT times and also plotted the heading data to see how rough the ride was. The lone waypoint was right before the balloon reached its apex. Minutes before the waypoint, the magnetometer (used for heading) was quiet for the most part, then moments after the lone waypoint, the magnetometer started changing a bunch! This seems to indicate the top of the trajectory and the balloon bursting. I think I can safely say I reached at least 60,000 feet!

There were so many things that went wrong, yet so many things went right, no doubt I learned a bunch, so I would count this mission as a success! In addition, the fact that I did recover everything in "working" condition means I must do this again. Here are a few brief notes on what I did correct and what I need to do next time.

Have any suggestions? Leave them in the comments below. We'd also love to hear about any of your HAB attempts.