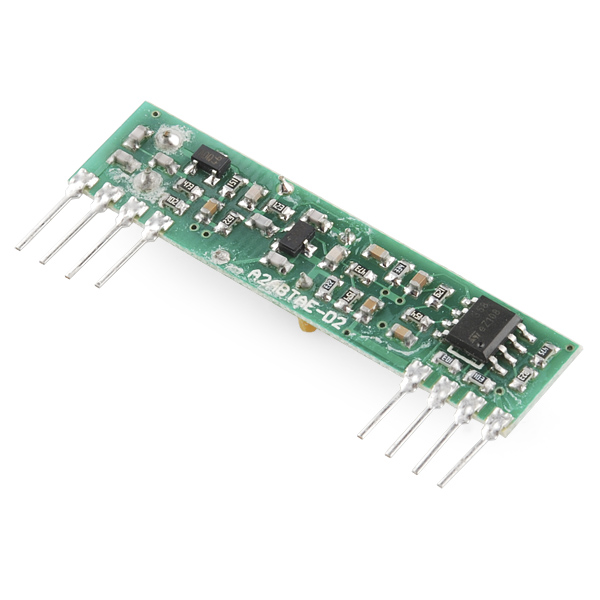 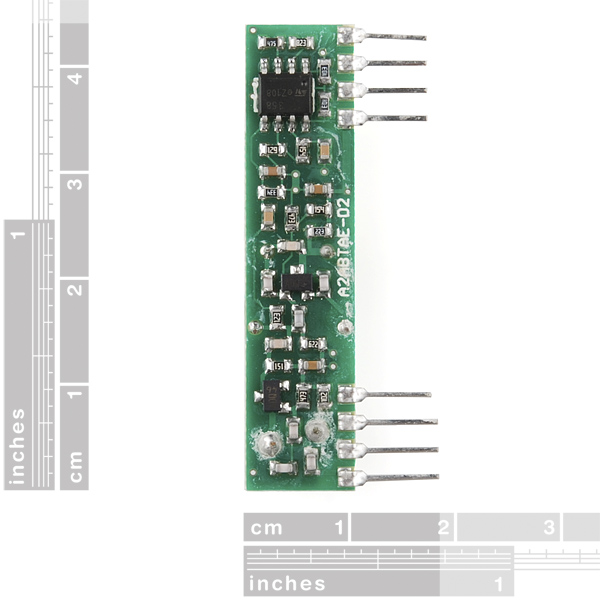 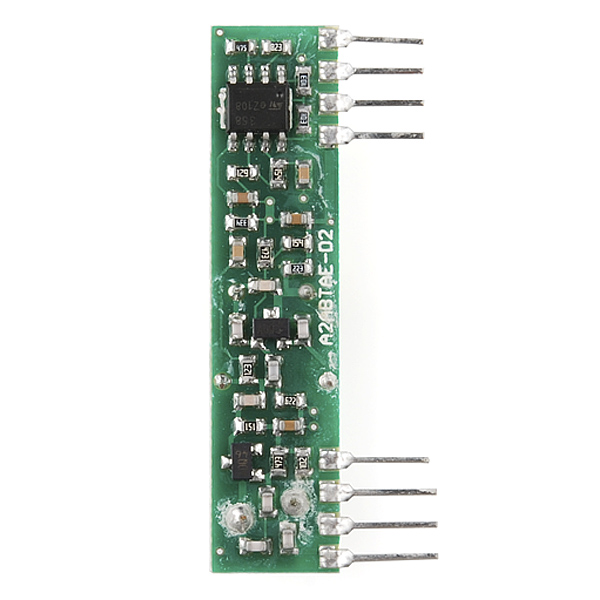 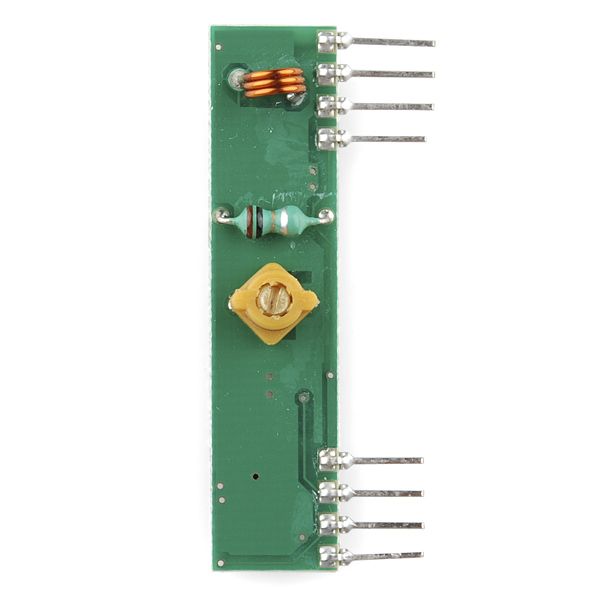 These wireless receivers work with our 434MHz transmitters. They can easily fit into a breadboard and work well with microcontrollers to create a very simple wireless data link. Since these are only receivers, they will only work communicating data one-way, you would need two pairs (of different frequencies) to act as a transmitter/receiver pair.

Note: These receivers are almost identical to the RF link 315MHz receiver. SparkFun does everything in our power to make sure you receive the product you requested. However, if you are concerned you may have received the incorrect product you can verify which version receiver this is by running a simple test circuit.

Depending on the Arduino library that you use, you could pair this RF Link with an ESP8266 to control wireless remote control sockets that use the same frequency. Here's one project example.

Pin 2 of your Arduino should connect to pin 2 of your RF Link Receiver 434MHz. When the button is pressed from the transmitter side, the corresponding LED on this side will light up on pin 8. One thing to note is that the associated LED will not light up on the receiver end if you do not have the associated character to check if it is what is received. An example is if you send a string of characters “Pin 4,” the receiver LED will not light up when the characters “Pin ” is sent. It will only light up when it sees the number “4”.

about 8 years ago by Member #398251 verified purchaser

I used this for a weather station. With an antenna I easily get communication at 20 yards through the house and likely much further (have not tested). Extremely easy to use with the accompanying transmitter.

Excellent performance over other choices

about 7 years ago by Member #437268 verified purchaser

I tested these against some that I got on Amazon and some that I got on eBay. I found that these (with an antenna of just a hunk of wire) gave me 30 feet more distance than the others. I checked the output on a scope and these had much less noise at a distance where the others gave up. My results will eventually be on our open source home monitoring system: https://github.com/TeamPracticalProjects/SISProject

about 8 years ago by Jim Dietrich verified purchaser

Got these (TX and RX) for an basic wireless project, got them up and running in no time with the VirtualWire library for Arduino (http://www.airspayce.com/mikem/arduino/VirtualWire/).

about 7 years ago by Pegasus verified purchaser

I have 8 Ambient Weather sensors located around the house that transmit data approximately once every minute. This receiver works great at picking them all up. Highly recommend.

These are products that cause people to hurt kittens

about 7 years ago by ehud42 verified purchaser

My bad. I'm new to radio gear. I followed a project that recommended the older superheterodyne receiver. It's been discontinued, but this one hasn't. Turns out this one is a crappy super-regenerative board.

For the minute difference in cost it should have been the other way around. Why sell things that annoy customers, when vastly superior products are available?

This unit is very noise sensitive. My 3D printer washed out the signal, rendering it useless anytime I'm printing.

After looking at a different (forked) project (https://github.com/scruss/Powermon433#user-content-quick-start), I see this is the worst of the 3 types of receivers available. Sparkfun carries the best (https://www.sparkfun.com/products/10154) - but it's 3V and at over 5 times the cost (plus you have to solder in your own headers).

There are superheterodyne receivers available (sadly from elsewhere) that are a drop in replacement. I found one and now I have no more lost packets while printing. Perfect.

Sorry Sparkfun - I like your company, but please replace this (d|r)egenerative unit with a superheterodyne one.

PS: Thanks for taking time to reach out and make my experience better! Looking forward to more little red boxes in the future.

Great receiver. Easy to get going (I used VirtualWire with an Arduino) and reliable. Very pleased with it, especially considering the price.

about 6 years ago by Member #781552 verified purchaser

Fair good all round receiver.

about 6 years ago by Member #405611 verified purchaser

Well, don't expect to slap some batteries on it a go. Not that simple. With my DSO I was able to create a favorable outcome with a op-amp, a few resistors, capacitors. I guess the best way to approach it is to think " modest control of current" as well as using the op-amp as a simple low pass active filter at all times. An oscilloscope is a must to see if a circuit is working without " false triggering".

about 6 years ago by Bonedog verified purchaser

Worked great with the matching receiver.

about 5 years ago by GeckoStudios verified purchaser

I used this unit along with the matching transmitter for making a new garage door remote that would also open a gate. Using the radiohead library and giving the transmitter 12 volts, I was getting over 200 feet of range with one antenna behind a brick wall. Better line of sight would have made it even better. These Sparkfun units are worth the money over the less expensive units that are found elsewhere. Highly recommend them and the Radiohead library.

Better documentation would be very helpful!

One question is, what is the small pot adjustment for? Is 5 volt the absolute maximum voltage for this device?

about a year ago by Member #1651764 verified purchaser

This receiver did work although I did not test it for distance. I had to go digging for some example implementations as well as example code. The deprecated VirtualWire library worked well although I would like some examples using the RadioHead library.

about 8 years ago by Member #385950 verified purchaser

I rated this as excellent because for the price it is an excellent RF link. This Rx is located in my basement and receives a signal from a Tx in my garage which is approximately fifty feet away. Plus it is simple to wire and easy to program my Arduino UNO to use it.