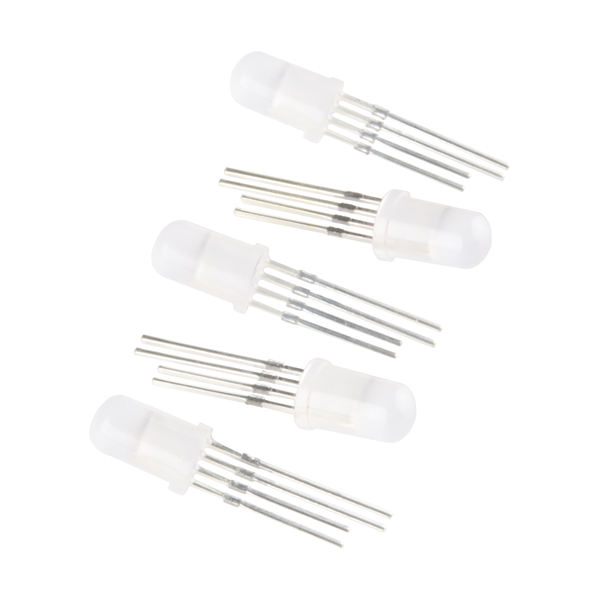 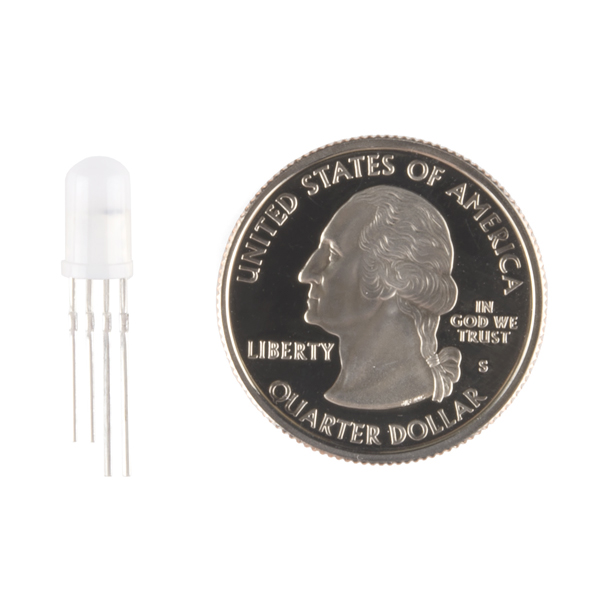 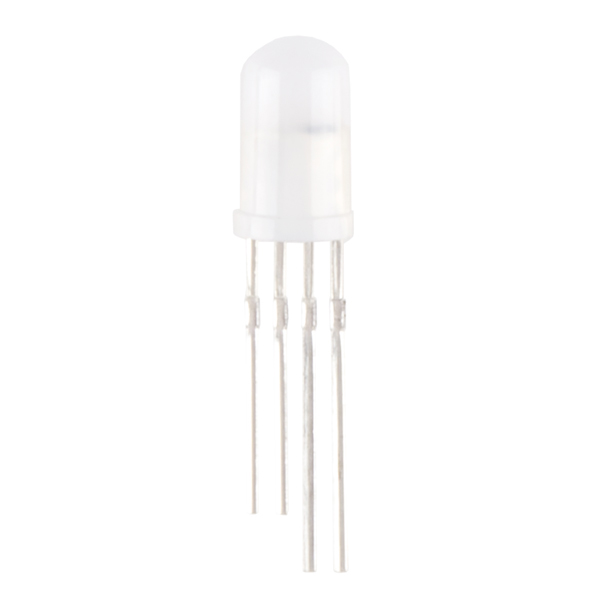 We know these look like a lot of our other LEDs, but they're not! These are PTH Addressable RGB LEDs with a WS2812 (or "NeoPixel") control IC built right into the them. This PTH version is incredibly similar to its SMD cousin, except it is a lot simpler to solder into your project and is in a diffused 5mm package. This RGB LED has the control IC moved into the actual LED, so we wanted to offer this amazing product to you! They’re great when you need a lot of color from not a lot of board space, now more so than ever.

If you are looking for a great addressable LED in the more common LED form factor, then this is the perfect choice for you.

Get Started with the WS2812 Hookup Guide

How to create a pixel string with the WS2812 and WS2812B addressable LEDs!
Favorited Favorite 10

They work as described

about 8 years ago by kewakl verified purchaser

about 8 years ago by Member #513616 verified purchaser

about 7 years ago by Member #32186 verified purchaser

The bag is marked "SJ-F5-2811-F" There are two long leads and two short leads, as shown in the photo. However, the data sheet has a different photo and it is unclear which is pin 1 on the shipped parts.

Wired it up assuming flat side was pin 1 but didn't work, don't want to burn out any more without being sure!

about 6 years ago by Muddejp verified purchaser

These worked as expected but it was hard since the datasheet doesn't match what comes in the bag. Here is a picture of the actual pinout. https://a.pololu-files.com/picture/0J5433.1200.jpg?cdc0daa0c2fd98e38ed59b7d43758c6b

Good, but a big caveat

about 6 years ago by Member #686378 verified purchaser

WARNING: These are not the same RGB LEDs that come in your SIK kit, and are in fact a completely different animal. Entirely my fault/ignorance that I ordered them not knowing this/understanding what they were. That being said, they still get four stars, as I was able to get them working (with a lot more effort than I originally intended and a lot more program space used, but saved on precious pinouts, so a good tradeoff.

I saw/was expecting four pin RGB LEDs like the one in my SIK where you send red/green/blue power on three of the pins, and the fourth is a ground. These LEDs you send DATA on one pin, then you have a power and a ground, which can be common across your whole project (I assume), so you can save a lot of pins (good thing as I needed four of these to match up to four sensors).

I was really nervous when I found out you have to control these with some specific binary via waveform. Luckily I was able to find the Adafruit::NeoPixel library on github that does all that heavy lifting for you. Good thing as that is probably beyond me. Now you have to include this whole library, so if you are using a tiny chip or extremely short on program space, beware.

After maybe an hour reading through the library examples on git and a few snafus with setting them up (they were defaulting to GRB with that library when copying the sample code), I finally got them working and signaling first, second, third, fourth place on our pinewood derby track as I wanted when paired with some QRD 1114 sensors to detect the finishes. So all in all, thumbs up and a good learning experience.

about 8 years ago by Member #123218 verified purchaser

I've long been looking for a frosted version that was also PTH. The color uniformity is spot on for the batch of 50 or so I bought. When you make your PCB footprint for these use an elongated pad with the smallest annular ring on the tight axis between pins. I got lots of solder bridges using circular only padstack.

Sparkfun describes this APA106 LED as having a WS2812 controller chip built-in. However, while there is a controller chip built-in, it is not a WS2812. It is more like the WS2811 in that the Red and Green control registers are reversed in the serial data stream. Also if you look at the APA106 datasheet you will see that the data timing is not the same as the WS2811/WS2812. The timing for the APA106 LED is 1.76us/bit, where as the timing for the WS2811/WS2812 is 1.25uS/bit. This could cause some control issues if you weren't aware of this and assumed it was equivalent to the WS2812. I'm knocking off one star for the Sparkfun description, not for the parts themselves.

about 7 years ago by JPizzle verified purchaser

When I purchased some WS2812B 5050 SMD LEDs, I found that I needed to solder in a capacitor across power for each LED. I bought a bunch of these PTH and assumed that I also needed one so I just went straight to it. But do these require a capacitor or is one built into the IC? On another note, I love how easy these are to daisy chain and control! So much easier than trying to control a lot of single LEDs.

While the datasheet makes mention that no external hardware is required, to be safe, I would suggest you use the smoothing capacitor on the power and in line resistor on the data line as shown in this tutorial https://learn.sparkfun.com/tutorials/ws2812-breakout-hookup-guide?_ga=1.248568967.1851504437.1417041706#hardware-hookup