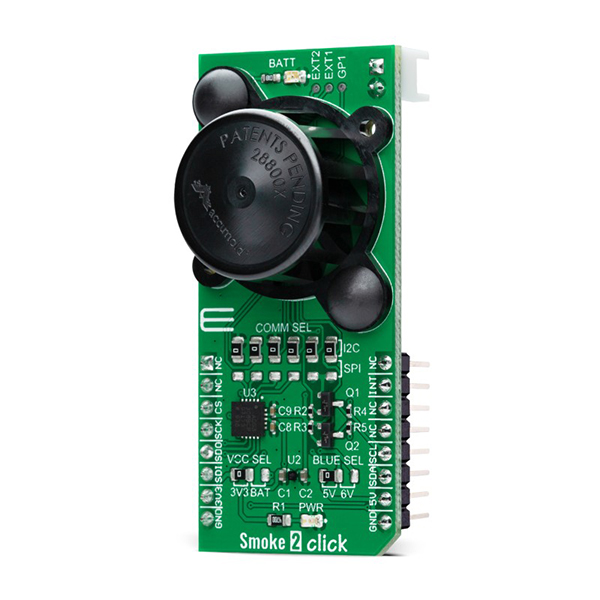 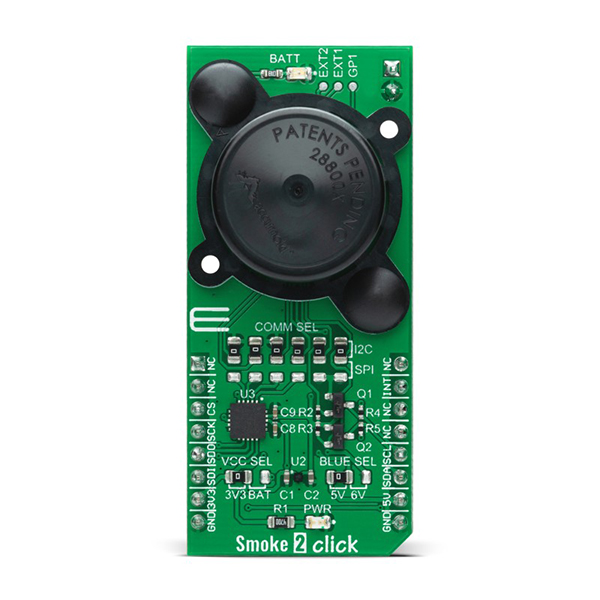 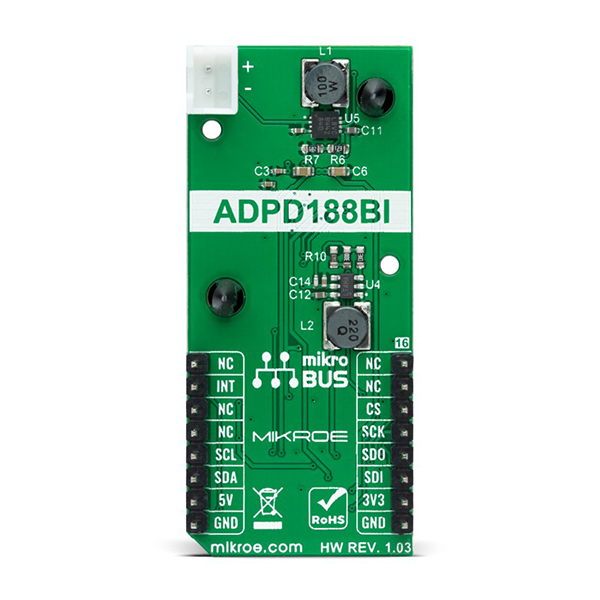 MIKROE Smoke 2 Click is a compact add-on board that contains the most efficient version of the smoke detector. This board features the ADPD188BI, a complete photometric system for smoke detection using optical dual-wavelength technology from Analog Devices. The module combines the dual photodetector with two separate LEDs and a mixed-signal photometric front-end ASIC, housed in a package that prevents light from going directly from the LED to the photodiode, without first entering the smoke detection chamber. It supports both an SPI and I2C serial interface, although only one is allowed at any given time in the actual application. This Click board™ is suitable for application as smoke detector that is more architecturally compatible for residential and commercial use.

Smoke 2 Click is based on the ADPD188BI, a complete photometric system for smoke detection using optical dual-wavelength technology from Analog Devices. The module combines the dual photodetector with two separate LEDs and a mixed-signal photometric front-end ASIC, and prevents light from going directly from the LED to the photodiode without first entering the smoke detection chamber. The dual-wavelength combination in a scattering measurement, a 470nm blue LED and an 850nm IR LED, allows particle size discrimination between different types of smoke, dust, or steam. The core circuitry stimulates the LEDs and measures the corresponding optical return signals. This integrated solution enables low power and reduces false smoke alarms in harsh environments due to dust, steam, and other nuisance sources.

The ADPD188BI operates in one of the following three modes: Standby, Program, or Normal Sampling Mode. Standby Mode is a power-saving mode in which data collection does not occur, while the Program Mode configures and program registers. During regular operation, the ADPD188BI pulses light and collects data, and in this mode, power consumption depends on the pulse count and data rate. Besides, the ADPD188BI also requires a supply voltage of 1.8V to work regularly. Therefore, a small regulating LDO, the ADP160 from Analog Devices, provides a 1.8V out of 3.3V mikroBUS™ rail, or optionally, from a battery power source.

The output from the LDO regulator provides a needed voltage for one side of the ADG3308, a bidirectional level translator containing eight bidirectional channels from Analog Devices, while the voltage for the other side of the level translator is delivered from the VCC SEL jumper. Also, this Click board™ may be battery-powered, indicated via an LED indicator labeled as BATT, and used as a stand-alone device. It has LTC3531, a synchronous buck-boost DC/DC converter also from Analog Devices allowing battery voltage to be converted to 3.3V, and used in a selection of voltage needed to be converted by ADP160 to supply ADPD188BI.

Smoke 2 Click provides the possibility of using both I2C and SPI serial interfaces, although only one is allowed at any given time in the actual application. All internal registers of the ADPD188BI are accessed through the selected communications interface. I2C supports Fast mode with data transfer of 400 kbps, while SPI interface support frequency up to 10MHz. This selection can be performed by positioning SMD jumpers labeled as COMM SEL to an appropriate position. Note that all the jumpers must be lined to the same side, or else the Click board™ may become unresponsive.

Additionally, test points, located in the upper part on the top side of the board, for pins EXT_IN1, EXT_IN2 and GPIO1 allow users to plug in external sensors like thermistor into the EXT pins and to use GPIO1 pin for some digital functionality. The EXT_IN1 and EXT_IN2 pins are also current inputs that can be connected to external sensors. A voltage source can be connected to the EXT_IN1 and EXT_IN2 pins through a series resistance, effectively converting the voltage into a current. Other test points for LED1, LED2, LED3 pins can be found under the smoke chamber on the top side of the board if users want to plug in their LEDs and not use the internal LEDs.

The user also has the option to select the voltage for the blue LED of the ADPD188BI, which can be selected via the BLUE SEL jumper in order to analyze the characteristics with the recommended and maximum values. This diode can be powered by a maximum of 6V achieved by LTC3459 from Analog Devices.

Optionally, the Smoke 2 Click board™, in addition to the mikroBUS™ power supply, can also be powered from an external battery. The battery power supply section is designed to power ADPD188BI and fulfill the demand for a complete solution, including the microcontroller and short-range radio power needs.

This Click board™ can be operated only with a 3.3V logic voltage level, supplied via mikroBUS™ or battery power, selected via the VCC SEL jumper. The board must perform appropriate logic voltage level conversion before use with MCUs with different logic levels. However, the Click board™ comes equipped with a library that contains functions and an example code that can be used, as a reference, for further development.