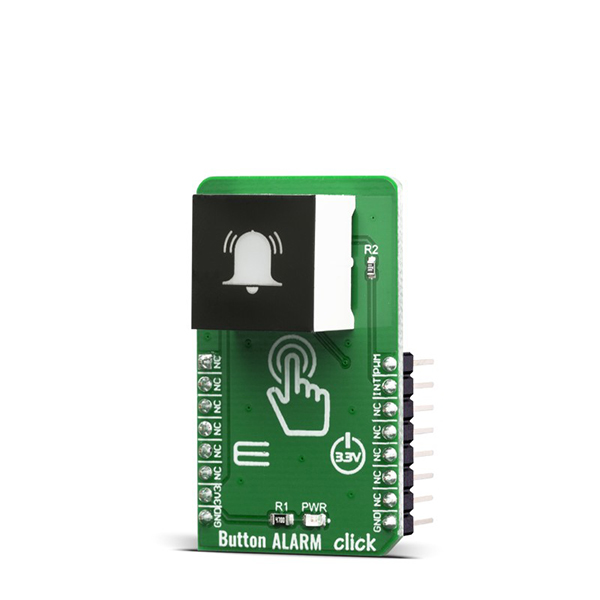 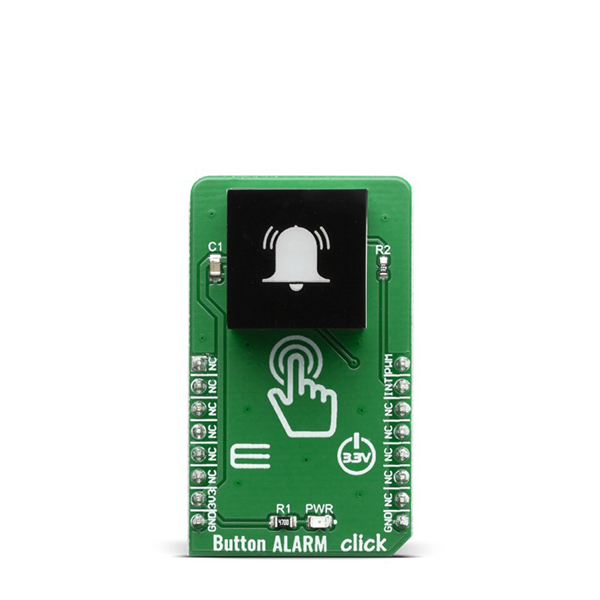 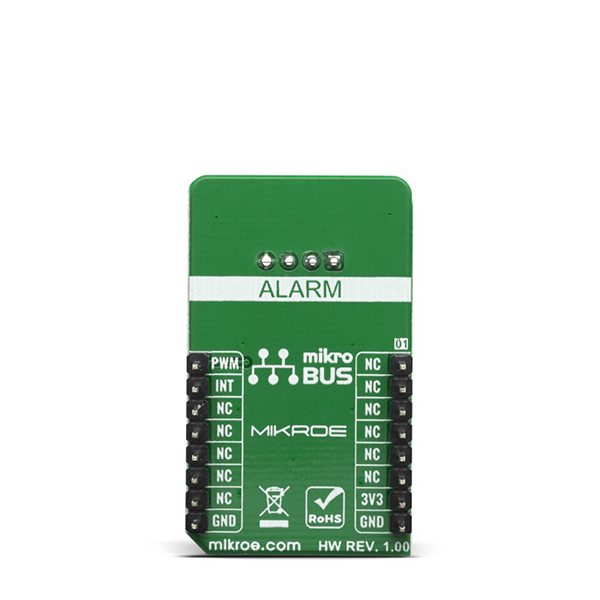 MIKROE Button ALARM Click is a very interesting interactive gadget on a Click board™. It is an integrated capacitive touch sensor display in the form of a button. By utilizing an advanced capacitive touch sensing technology, the CTHS15CIC05ALARM sensor can successfully replace the traditional mechanical button, allowing very simplified yet reliable user interfaces to be developed. Besides the touch detection, this sensor also features a green power symbol icon with backlight, which makes the Click board™ very useful for building various stylized and visually appealing interfaces.

The Click board™ is supported by the mikroSDK compliant library, which includes functions that simplify software development.

Featuring an advanced integrated touch sensor IC placed in a robust housing, able to sense the touch even when the hands are wet or when certain types of gloves are used, Button ALARM click represents an ideal solution for the development of interfaces for public gaming consoles and slot machines, media players, interfaces for various home appliances and other consumer equipment, and similar applications that can benefit from using a durable touch sensor in an attractive enclosure.

Button ALARM Click is equipped with the CTHS15CIC05ALARM , a capacitive touch sensor display, by VCC (Visual Communications Company). This sensor is an all-in-one solution, an providing a capacitive touch sensing in an appealing housing, with the backlit power symbol icon on the top. There is a minimum number of pins used on this device: only four pins are exposed to the user. Besides the power supply pins (VCC and GND), two more pins are used. The touch detection is indicated by a HIGH logic level on the OUT pin of the CTHS15CIC05ALARM sensor, while the IN pin is used as the power supply for two internal LEDs, which are connected in the common cathode configuration. The forward voltage of the LEDs is 3.2V typically. The OUT pin of the sensor is routed to the INT pin of the mikroBUS™, while the IN pin of the sensor is routed to the PWM pin of the mikroBUS™.

The alarm symbol icon on the top of the touch sensor is visible even when the backlight is off, thanks to the LEXAN™ polycarbonate film with an inverse print of the icon, placed on a top of the sensor. When the internal LEDs are turned ON, the light will pass through the translucent power symbol icon, resulting in a uniformly lit power symbol icon. An interesting lighting effect can be designed when touched, by applying a PWM signal to the IN pin.