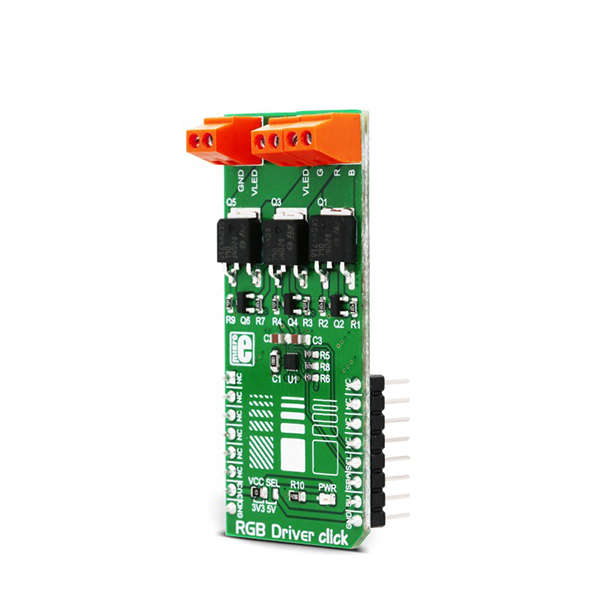 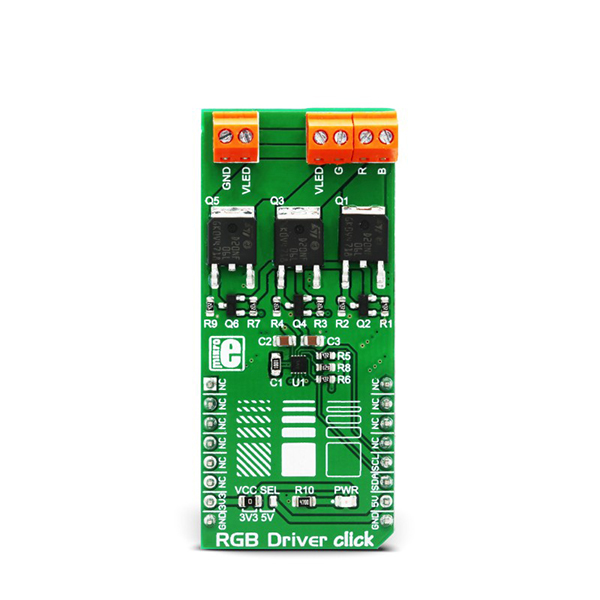 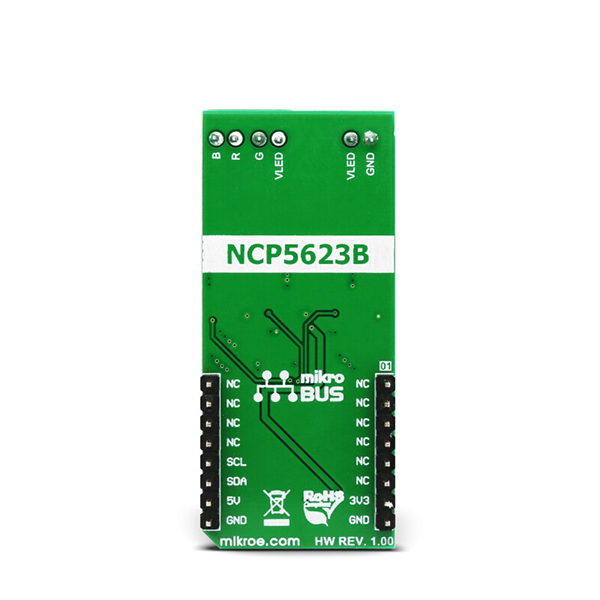 MIKROE RGB Driver Click is an RGB LED driver, capable of driving RGB LED stripes, LED fixtures and other RGB LED applications that demand an increased amount of current and voltage. Besides the NCP5623B IC, a triple output RGB LED driver IC which uses I2C interface for the communication with a microcontroller (MCU), this Click board™ is equipped with three additional Power MOSFETs with very low RDSON value, which allow this IC to drive power demanding RGB elements, such as the LED strips, LED spotlights and similar RGB LED installations. The IC itself is capable of displaying a large palette of colors with 32 steps for each of the R, G, and B channels.

Equipped with the feature-rich three-channel IC LED driver which can be commanded via the industry standard I2C interface, and Power MOSFET drivers on the output stage, LED Driver 3 Click can be used to develop and prototype a wide range of RGB LED lighting applications: three-colored LED stripes, RGB spotlight fixtures, and similar color lighting applications that can be controlled by an MCU.

The main component of LED Driver 3 Click is the NCP5623B, a triple output RGB LED driver, controlled via the I2C interface, from ON Semiconductors. This IC is equipped with an internal DC/DC converter, that works as a high-efficiency charge pump, supplying all three LED segments. The current flow through each LED segment is regulated by an internal current mirror associated with each of the channels, and it is limited by an onboard resistor to about 20mA.

To allow interfacing with LED strips and similar LED devices that require much higher voltages and currents than what NCP5623B is able to provide, the Click board™ utilizes additional power MOSFET elements. It uses STD20NF06LT4 N-Channel power MOSFETs, with very low RDSON of 0.03Ω, rated up to 60V. In practice, the maximum load will be determined by the power dissipation, but having in mind low RDSON value, these MOSFETs should withstand a reasonable amount of current, even with no additional heat sinks.

The NCP5623B IC contains three integrated PWM structures, one for each channel. The PWM signal is used to modulate current from the DC/DC converter. The intensity of this current can be set via I2C registers. Since there are MOSFETs instead of LEDs connected at the output stage of the IC, changing current will not affect the connected LED light intensity. Therefore, the only way to modify the intensity of the connected LEDs is to control the duty cycle of the internal PWM structures, for each LED channel. There are five bits used to control the duty cycle of the internal PWMs, resulting in 32 color steps per channel.

Since the driver IC is constructed so its output drivers sink current from an internal charge pump DC/DC converter, additional P-channel low power MOSFETs are used to drive the gates of the N-channel Power MOSFETs. This allows current to sink from the external power supply source, connected load (LEDs), through the Power MOSFETs, and to the GND. This configuration allows for much higher voltage and current ratios than with the NCP5623B alone.

SCL and SDA lines of the IC are routed to the mikroBUS™ and allow secure and simple connection with the host MCU. The Click board™ is capable of interfacing to both 3.3V and 5V MCUs. This can be done by switching the small SMD jumper labeled as VCC SEL to the required position, selecting the appropriate logic voltage level. Output screw terminals are used to securely connect the LED power supply, as well as the R, G, and B LED channels.