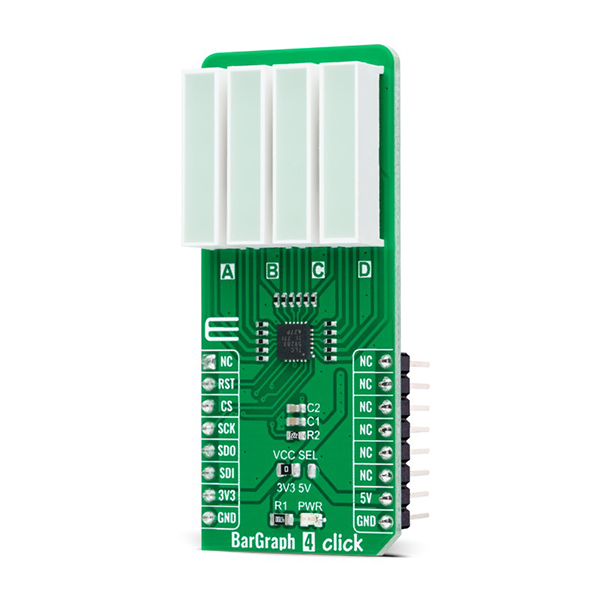 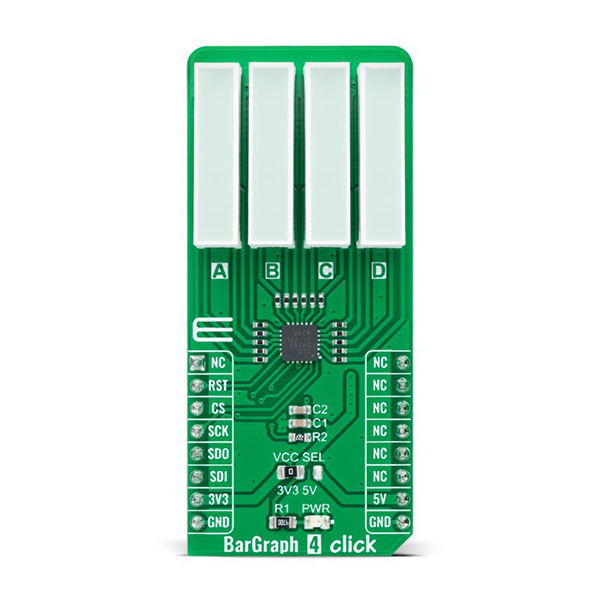 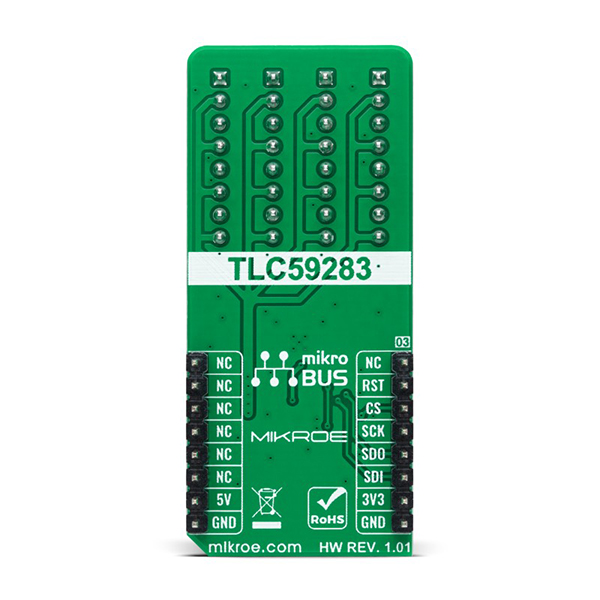 MIKROE BarGraph 4 Click is a compact add-on board that contains four green four-segment LED bar graph displays. This board features the TLC59283, a 16-channel, constant-current sink light-emitting diode (LED) driver from Texas Instruments. Depending on the operating VCC, each channel can be individually controlled with a simple SPI serial communications protocol compatible with 3.3V or 5V logic levels. It also comes with a constant-current value of all 16 channels set by a single resistor and one GPIO pin used to turn off all outputs during Power-On and output data latching to prevent unwanted image displays during these times. This Click board™ is suitable for creating various types of VU meters, status indicators, different types of counters, and similar devices.

BarGraph 4 Click is supported by a mikroSDK compliant library, which includes functions that simplify software development.

BarGraph 4 Click as its foundation uses the TLC59283, a 16-channel, constant-current sink light-emitting diode (LED) driver from Texas Instruments. Each channel can be individually controlled with a simple serial communications protocol compatible with 3.3V or 5V logic levels depending on the operating VCC. It also comes with a constant-current value of all 16 channels, determined by an external resistor R2 with a value of 2.2kΩ, limiting the current to 24mA. You can find the exact value of the current per channel, as well as the corresponding resistance value for a given current, in the attached datasheet.

In the upper part on the front side of the board, marked with the characters A, B, C, and D, four green four-segment LED bar graph displays, the HLMP-2550 are placed. The Green HLMP-2500 series LEDs use a liquid phase GaPepitaxial layer on a GaP substrate. These light bars are designed for various applications where a large bright light source is required, making this Click board™ suitable for creating different VU meters, status indicators, counters, and similar devices.

The TLC59283 communicates with MCU using the standard SPI serial interface with a maximum frequency of 35MHz. It has a 16-bit shift register and an output ON/OFF data latch. Both shift register and data latch are 16 bits long and used to turn the constant-current outputs on and off. It also comes with one GPIO pin, routed on the RST pin of the mikroBUS™ socket, used to turn off all outputs during Power-On and output data latching to prevent unwanted image displays during these times.

When the device is initially powered on, the data in the 16-bit shift register and output on or off data latch are not set to default values. Therefore, the output ON/PFF data must be written to the data latch before turning the constant-current output ON. The RST pin should be high when powered on because the constant-current may be turned ON due to random data in the output on or off data latch.

This Click board™ can operate with both 3.3V and 5V logic voltage levels selected via the VCC SEL jumper. This way, it is allowed for both 3.3V and 5V capable MCUs to use the SPI communication lines properly. However, the Click board™ comes equipped with a library containing easy-to-use functions and an example code that can be used, as a reference, for further development.