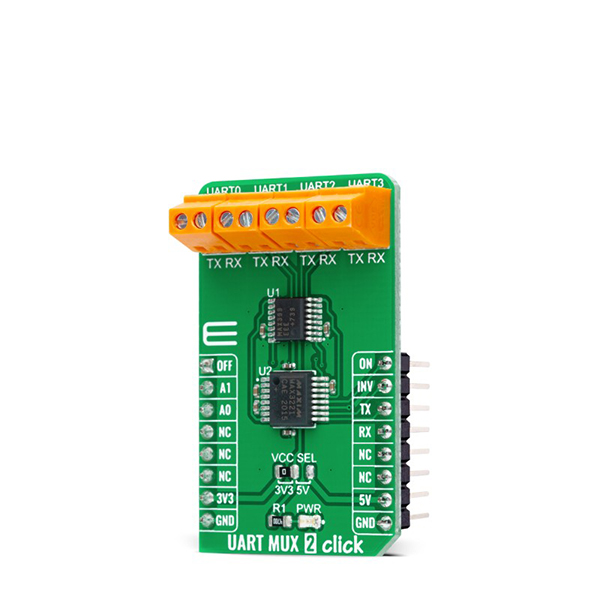 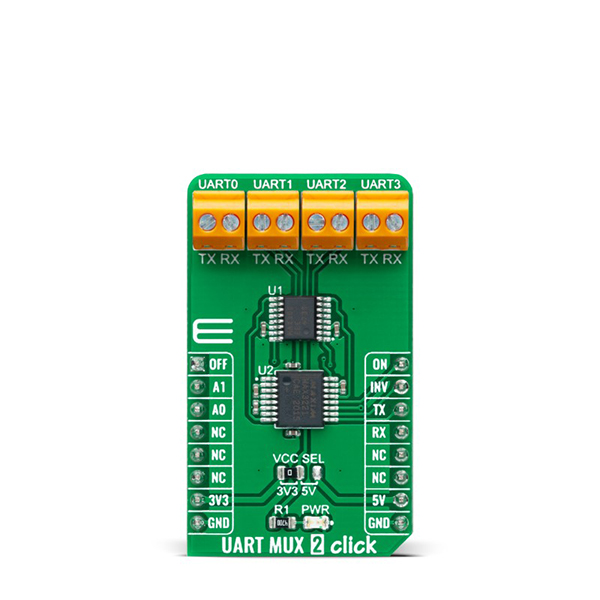 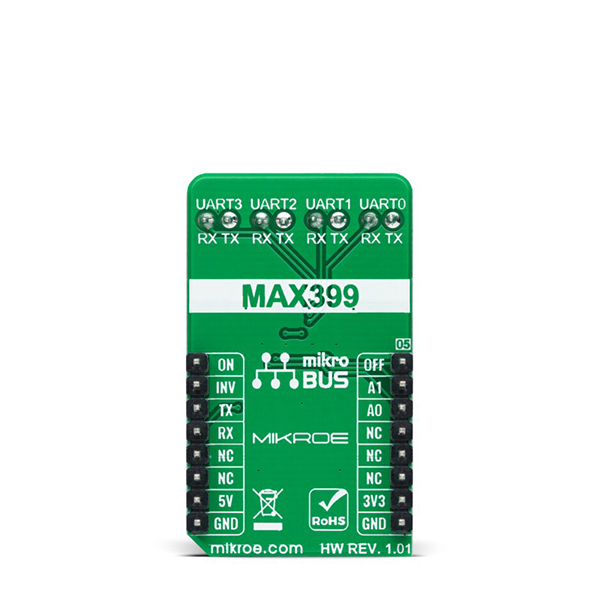 UART MUX 2 Click is a compact add-on board that enables pseudo-multidrop RS232 transmission. This board features the MAX399, a precise CMOS analog multiplexer that allows four remote RS-232 transceivers to share a single UART from Analog Devices. It offers fast switching speeds with a transition time of less than 250ns and low on-resistance less than 100Ω while retains CMOS-logic input compatibility and fast switching. Channel selection is performed through a set of specific GPIO pins and possesses additional functionality such as the manual ON/OFF feature. This Click board™ is suitable for a wide range of applications, from industrial and instrumentation to a consumer, communications, data-acquisition systems, and many more.

UART MUX 2 Click as its foundation uses the MAX399, a precise CMOS analog multiplexer that enables pseudo-multidrop RS232 transmission from Analog Devices. This multiplexer allows multiple channels, in this case, four, to share a single UART interface. It offers fast switching speeds with a transition time of less than 250ns and low on-resistance less than 100Ω while retains CMOS-logic input compatibility and fast switching.

The dual four-to-one multiplexer permits transceiver MAX3221 to form a network with the four remote transceivers connected to terminals labeled as UART0-UART3 located in the upper part of the Click board™. The circuit's supply-voltage range (3V to 5.5V) makes it compatible with 3V and 5V logic. MAX399 receives its power directly from power terminals of MAX3221, whose ±5.5V outputs come from an internal charge pump. The multiplexer handles rail-to-rail signals, so obtaining its power from MAX3221 ensures that RS232 signals pass directly through, regardless of amplitude.

The UART MUX Click communicates with MCU through MAX3221 using the UART interface for the data transfer. The MAX3221 can run at data rates up to 250 kbps while maintaining RS232-compliant output levels. Channel selection is performed through a set of specific GPIO pins, labeled as A0 and A1 routed on the CS and RST pins of the mikroBUS™ socket. Selecting its channel 1, for instance, enables MAX3221 to communicate with UART0 without being loaded by UART1 to UART3. Pulldown resistors inside the remote transceivers force the outputs of un-selected receivers to a known state.

In addition to a channel selection, this Click board™ also has an automatic power-down feature that can be disabled when ON and OFF pins are high, routed on the PWM and AN pins of the mikroBUS™ socket. Also, it uses the interrupt pin of the mikroBUS™ labeled as INV as an invalid indicator which makes interfacing with the RS232 simple and easy, indicating whether a valid RS232 signal is present not.

This Click board™ can operate with both 3.3V and 5V logic voltage levels selected via the VCC SEL jumper. This way, it is allowed for both 3.3V and 5V capable MCUs to properly use the UART communication lines. However, the Click board™ comes equipped with a library containing easy-to-use functions and an example code that can be used, as a reference, for further development.