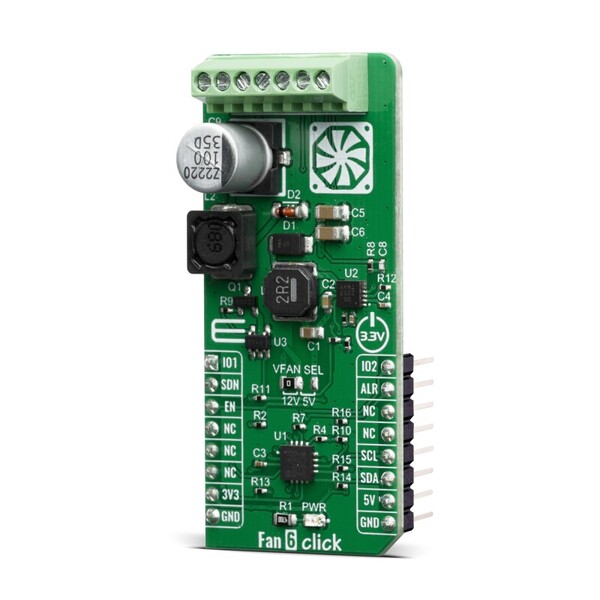 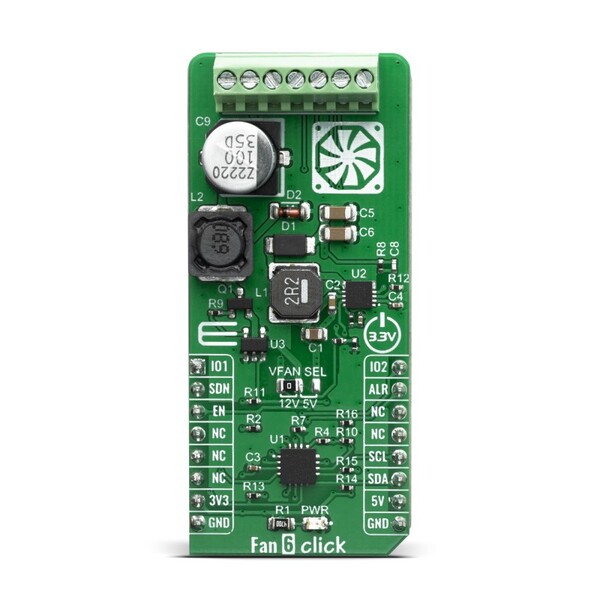 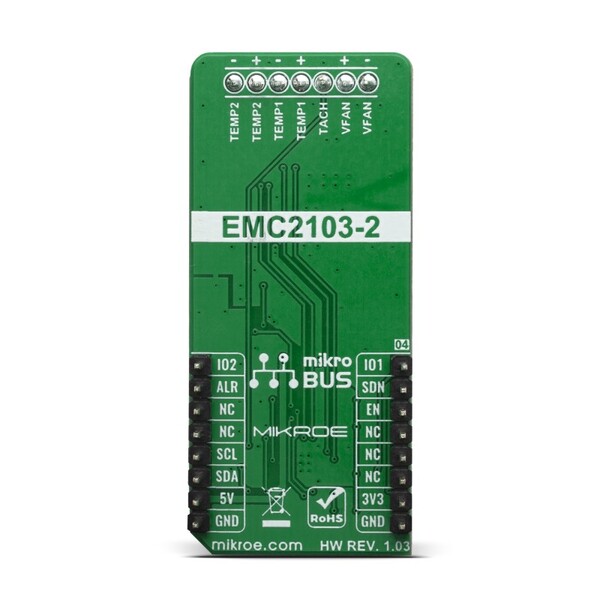 The Fan 6 Click is a Click board™ which features EMC2103, an SMBus compliant fan controller with up to up to 3 external and 1 internal temperature channels. The fan driver can be operated using two methods each with two modes. The methods include an RPM based Fan Speed Control Algorithm and a direct PWM drive setting. The modes include manually programming the desired settings or using the internal programmable temperature look-up table to select the desired setting based on measured temperature. And MIC2253 a high power-density, 1 MHz PWM DC/DC boost regulator which allows driving 12V fan.

The Fan 6 Click is supported by a mikroSDK compliant library, which includes functions that simplify software development.

The Single Cell Click allows the user to program temperatures generated from external sources to control the fan speed. This functionality also supports DTS data from the CPU. By pushing DTS or standard temperature values into dedicated registers, the external temperature readings can be used in conjunction with the external diode(s) and internal diode to control the fan speed. The EMC2103 from Microchip also includes a hardware programmable temperature limit and dedicated system shutdown output for thermal protection of critical circuitry. The EMC2103 supports a high or low frequency PWM driver. The output can be configured as either push-pull or open drain and the frequency ranges from 9.5Hz to 26kHz in four programmable frequency bands.

The EMC2103 includes an RPM based Fan Speed Control Algorithm. This fan control algorithm uses Proportional, Integral, and Derivative terms to automatically approach and maintain the system’s desired fan speed to an accuracy directly proportional to the accuracy of the clock source.

The EMC2103 supports DTS (Intel’s Digital Temperature Sensor) data in the Fan Control Look Up Table. Intel’s DTS data is a positive number that represents the processor’s relative temperature below a fixed value called TCONTROL which is generally equal to 100°C for Intel Mobile processors. For example, a DTS value of 10°C means that the actual processor temperature is 10°C below TCONTROL or equal to 90°C.

The EMC2103’s RPM based Fan Speed Control Algorithm has programmable configuration settings for parameters such as ramp-rate control and spin up conditions. The fan driver automatically detects and attempts to alleviate a stalled/stuck fan condition while also asserting the ALR pin.

The tachometer measurement circuitry is used in conjunction with the RPM based Fan Speed Control Algorithm to update the fan driver output. Additionally, it can be used in Direct Setting mode as a diagnostic for host based fan control. This method monitors the TACH signal in real time. It constantly updates the tachometer measurement by reporting the number of clocks between a user programmed number of edges on the TACH signal.

The External Diode 1 channel can support a diode-connected transistor (such as a 2N3904) or a substrate transistor requiring the BJT or transistor model (such as those found in a CPU or GPU). The External Diode 2 channel supports any diode connection or it can be configured to operate in anti-parallel diode (APD) mode.

The MIC2253 is a constant frequency, pulse-width modulated (PWM) peak current-mode step-up regulator. A reference voltage is fed into the PWM engine where the duty cycle output of the constant frequency PWM engine is computed from the error, or difference, between the REF and FB voltages. The PWM engine encompasses the necessary circuit blocks to implement a current-mode boost switching power supply, allowing Fan 6 Click to drive 12V fan.