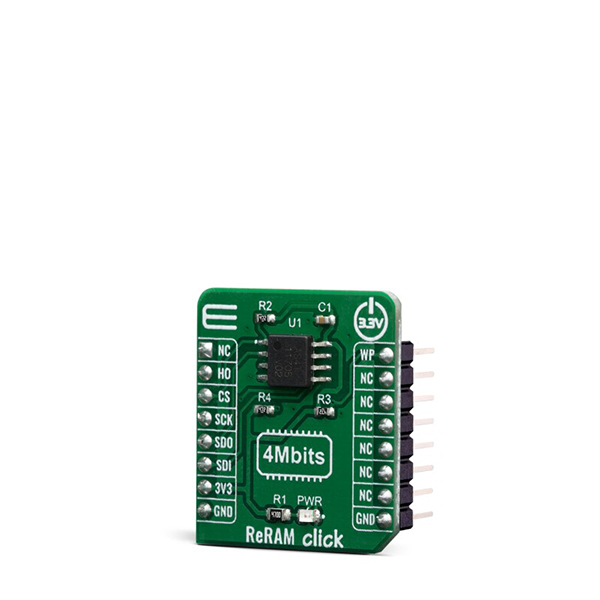 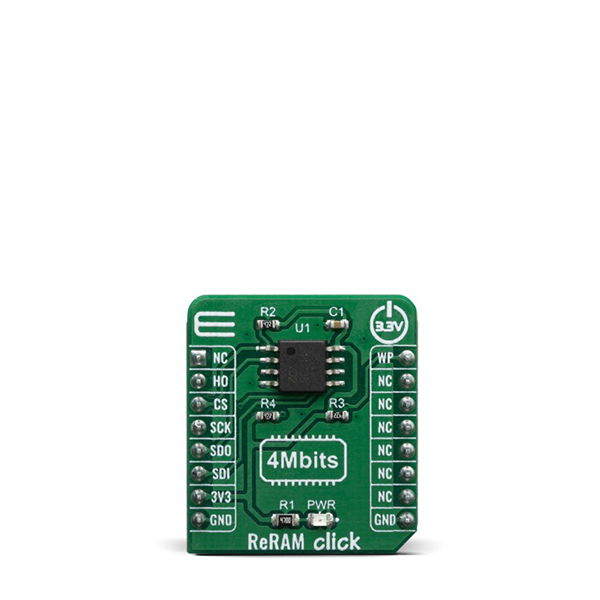 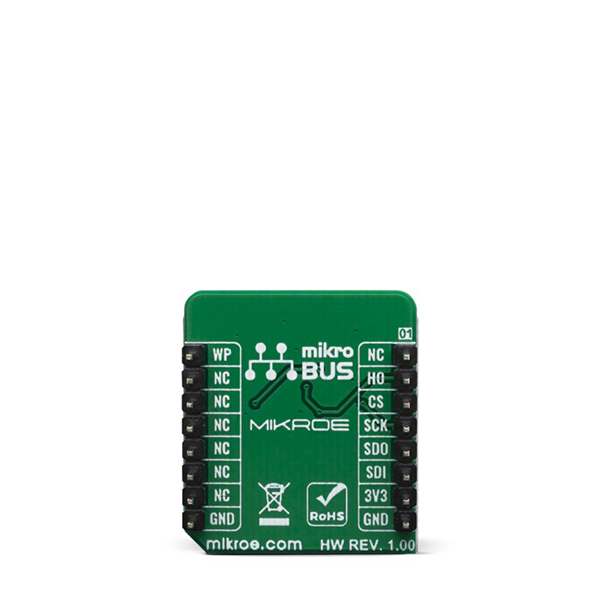 ReRAM Click features ReRAM (Resistive Random Access Memory) module which contains the cell array made of 524.288 words x 8 bits, which totals 4 Mbits of data. The used memory module can withstand a large number of write cycles, it has data retention period greater than 10 years and it can read and write to random addresses with no delay. Besides these features that already mark this kind of memory modules a milestone in memory manufacturing technology, the device features block write protection, low power consumption and fast SPI interface that can theoretically work up to 5MHz. Because of its universal memory characteristics, ReRAM Click can be used both as a non-volatile storage media, or temporary RAM expansion for storing variables in any embedded application.

ReRAM Click is supported by a mikroSDK compliant library, which includes functions that simplify software development.

ReRAM Click carries a resistive RAM module. Resistive RAM, also known as ReRAM, is a non-volatile memory type, that works by changing the resistance across a dielectric solid-state material, often referred to as a memristor. Compared to traditional flash memory, ReRAM offers much faster, bit-alterable, erase-free operation. It delivers much lower read latency, faster write performance than Flash, can be architected with smaller pages to reduce read and write latencies, lower energy and increased lifetime of the storage solutions. Although the ReRAM is still being developed, this ReRAM module can write data at bus speed, has an extremely high endurance of 1.2 x 106 read/write cycles, data retention period of 10 years, and very fast SPI interface.

ReRAM is an abbreviation for resistive Random Access Memory. This is a fairly new type of memory. The main features of ReRAM modules include write endurance, read / write cycles with no delay and data retention even after power loss. This makes these modules a kind of universal memory, a hybrid between standard RAM modules and EEPROM and similar types of FLASH memory. The ability to randomly access the memory cells without the need to refresh them and with no delay makes this type of memory looks like an SRAM. Data retention after power off, makes it look like a FLASH memory. Therefore, it is often referred to as the universal memory.

There are certain downsides and flaws that prevent this type of memory to become the main memory medium and replace all types of memory used so far. ReRAM memories involves generating defects in a thin oxide layer, known as oxygen vacancies (oxide bond locations where the oxygen has been removed), which can subsequently charge and drift under an electric field. The motion of oxygen ions and vacancies in the oxide would be analogous to the motion of electrons and holes in a semiconductor. The problems with this is obvious: these memories rely on exotic materials and complicated switching mechanisms, so the development is quite complex. There are various methods used to overcome these problems, but they remain the main reasons why this type of memory hasn’t replaced other memory types, yet. However, in the embedded world, where the memory amount demands are rather limited, this type of memory most certainly deserves attention. ReRAM is a perfect solution for cost-sensitive applications, such as wearables and IoT devices

ReRAM Click board™ uses the MB85AS4MT, a 4 megabits serial SPI ReRAM memory module from Fujitsu Semiconductor. This module contains 524.288 x 8 bits of memory that can be randomly accessed. The pinout of the used memory module is the same as most commonly used EEPROM modules so that it can directly replace it. The usual SPI lines - SO, SI, SCK and #CS pins from the MB85AS4MT IC are routed to the mikroBUS™ SPI port (MISO, MOSI, SCK and CS pins). Besides the SPI serial bus, there are two more pins routed to the mikroBUS™.

The logical organization of the module, such as read and write commands and the status register of the MB85AS4MT IC are the same as with most commonly used EEPROM modules, such as the one used in EEPROM 4 Click. That allows this memory module, as well as ReRAM Click to replace the existing EEPROM module with not too much additional work. The provided libraries offer all the functions needed to work with the ReRAM Click. Their usage is demonstrated in the included example application which can be used as a reference for further development.

This Click board™ is designed to be operated only with 3.3V logic level. A proper logic voltage level conversion should be performed before the Click board™ is used with MCUs with logic levels of 5V. It is ready to be used as soon as it is inserted into a mikroBUS™ socket of the development system.