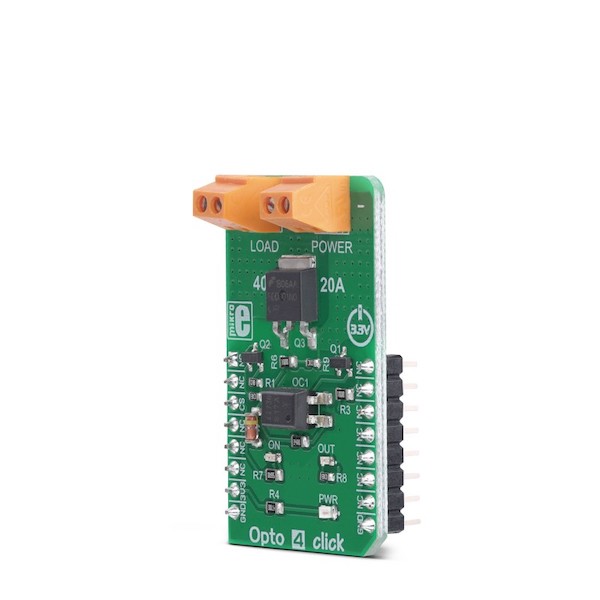 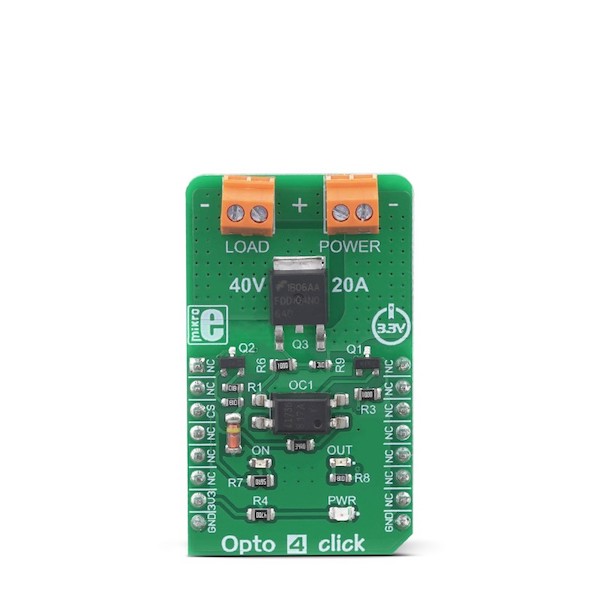 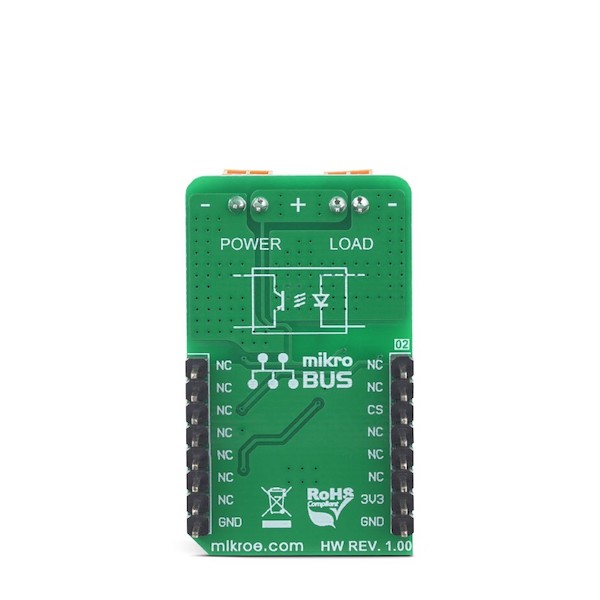 Opto 4 Click is a galvanically isolated power switch, which uses a power MOSFET in combination with an optocoupler. The power MOSFET can withstand significant current due to its low ON resistance, allowing this Click board™ to be used with different kinds of power demanding applications. In addition, this Click board™ is equipped with the voltage limiting circuit, which cuts off the power supply when the voltage of the externally connected power supply suddenly drops. The galvanic isolation of the optocoupler offers protection of the controller circuit, thus preventing power surges from the controlled circuit.

Opto 4 Click is supported by a mikroSDK compliant library, which includes functions that simplify software development.

Featuring very good electrical specifications, including high operating voltage, high current capacity, optical galvanic isolation of the controller circuit, and undervoltage protection, Opto 4 Click is a perfect solution which can be used for development of a wide range of power demanding applications, including driving of LED stripes, light bulbs, different types of DC motors, and other similar applications that require an electronically controlled high-current switch.

Opto 4 Click uses the LTV-817S, an optocoupler with a high isolation voltage, by LITEON. This is a single-channel optocoupler which uses the low current provided by the output pin of the microcontroller (MCU) to activate its output stage. Besides an internal biasing LED, the MCU drives an additional external yellow LED, which signalizes that the MCU output is at a HIGH logic level. This led is labeled as ON, and it is used to indicate the state of the optocoupler output stage (conductive or non-conductive). The host MCU uses the CS pin of the mikroBUS™ to drive the input stage of the LTV-817S optocoupler.

The output stage of the optocoupler is used to drive the gate terminal of the FDD10AN06A0, an external power MOSFET, manufactured using the PowerTrench® technology, by ON Semiconductor. This MOSFET allows much more current to flow through the connected load, due to its extremely low ON resistance of about 10 mΩ, typically (10V). This MOSFET is designed to be used in switching circuits and for DC/DC converters, providing a high efficiency for these applications. As such, it has a very low capacitance on its gate terminal, allowing it to be driven with reasonably high-frequency PWM signals.

The undervoltage protection feature can be useful to switch off the load in the case when the short-circuit condition occurs: the voltage of the power supply during short circuit event may drop, resulting the undervoltage circuit to be activated. However, if a reasonably strong power supply is used, the short-circuit current may be enough to destroy the power MOSFET or the input terminals.