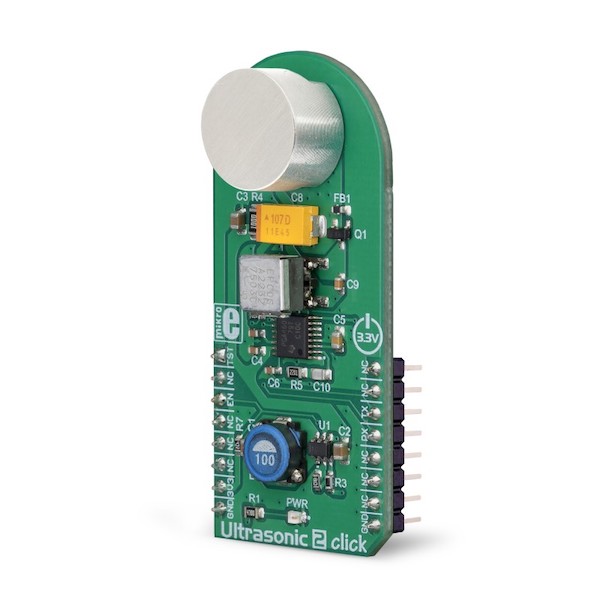 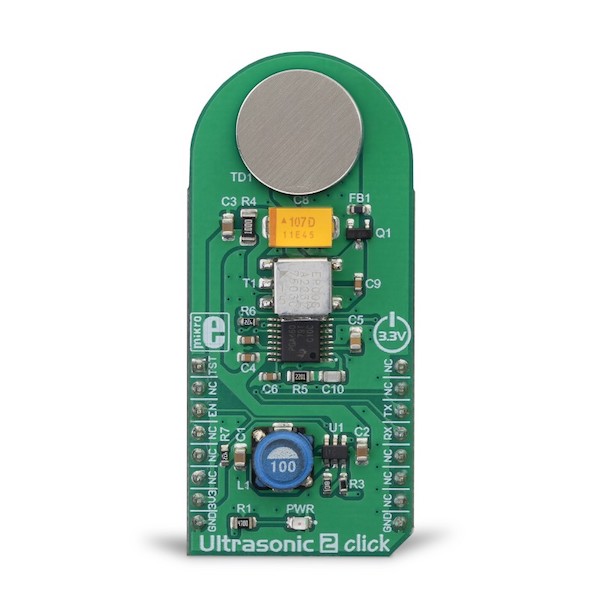 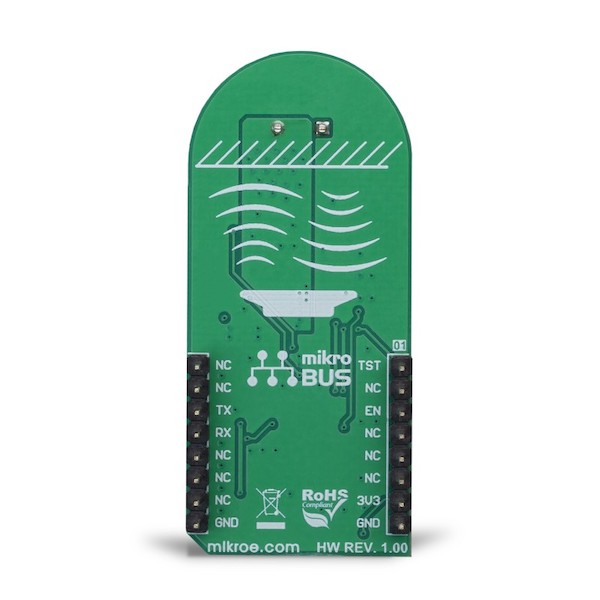 The Ultrasonic 2 Click is an ultrasonic range detection Click board™, capable of detecting both near-field and far-field objects. It is equipped with the PGA460, a highly-integrated system-on-chip (SoC), based on SONAR principle. This SoC consists of a low-noise analog front end (AFE) with a programmable time-varying gain stage, a digital signal processor (DSP), and an integrated transducer driver. The PGA460 offers a very accurate and reliable range detection, regardless of the position of an object: the incoming echo signal is conditioned and dynamically amplified over time before it is digitized, so that the optimal signal-to-noise ratio can be achieved.

The main component of the Ultrasonic 2 Click is the PGA460, an integrated ultrasonic signal processor and transducer driver, produced by Texas Instruments. This system-on-chip (SoC) device features a set of different devices, integrating them into a single IC: a low-noise analog front end (AFE) with a programmable time-varying gain stage, a digital signal processor (DSP), and an integrated transducer driver. An additional temperature sensor is also integrated into the SoC, which allows thermal compensation. The device uses the UART communication interface to exchange commands and data with the host microcontroller unit (MCU). More information on registers, data format through the UART, and more detailed explanation can be found in the PGA460 datasheet, in the download section below. However, Ultrasonic Click is supported by the mikroSDK library which contains functions and initialization routines, which allow to directly obtain distance parameters of a detected object, greatly simplifying the design, and cutting time to market.

The PGA460 SoC is based on a SONAR principle: it produces an ultrasound pulse burst while recording the received echo response. The received echo signal is then processed and compared to a set of time-varying thresholds, stored in the non-volatile memory of the device. A time-variable gain stage allows the whole dynamic range of the A/D converter to be used, allowing accurate detection for both near-field and far-field objects: a higher gain is applied to echo responses coming from distant objects. Before the gain is applied, the echo response is processed by the second order bandpass IIR filter with selectable bandwidth, as well as the first order lowpass filter with selectable cutoff frequency, reducing any sounds and noises that might interfere with readings.

The PGA460 has the ability to produce an ultrasonic burst and record its echo response, which is similar to how SONAR operates. To allow ultrasonic pulses with high sound pressure level (SPL), Ultrasonic 2 Click utilizes an output transformer, driven by the transducer driver section of the PGA460 SoC. The driver section is composed of a complementary driver pair, used to excite primary windings of the transformer. The secondary windings are directly connected to an ultrasonic transducer. The ultrasonic transducer can be both time-decoupled and temperature-decoupled, ensuring very reliable acquisition of the echo response.

Two sets of preset threshold and gain values are included in both cases when an ultrasonic burst is produced, and when the transducer is used only to record the response. In the second case, a separate ultrasonic burst source would still be required. The preset values are stored along with their time stamps, allowing them to be applied to specific time points of the echo recording. A linear interpolation is applied between consecutive points, allowing smooth transition over time. If the recorded echo response contains amplitude values that exceed the threshold value, a detection event will be recorded, along with the time code. After the burst-and-listen (or just listen) cycle is complete, the PGA460 device computes the distance, amplitude, and width of the echo, through the UART communication interface.

As mentioned before, threshold and gain preset values are stored in the non-volatile memory of the device, along with some other parameters (42 bytes of user EEPROM). This allows the configuration parameters to be preserved after the power cycle, allowing fast initialization. The user has the ability to adjust these values and fine-tunes the application responsiveness for the specific conditions in which it will be used.

Since the PGA460 SoC IC requires a slightly higher voltage level for its operation than it is available from the mikroBUS™ power rails, Ultrasonic 2 Click is also equipped with the voltage boost IC. For this purpose, the TLV61046, a 28V output voltage boost converter from Texas Instruments. This voltage converter requires a minimum number of external components, which allows it to be implemented in a very small area of the PCB. This makes it a viable solution to be used alongside the PGA460 on the same Click board™. It is set to output approximately 7.5V on its output, an optimal voltage for operation of the PGA460. The transformer used to provide the necessary voltage for the ultrasonic transducer capsule is also included on the Click board™ along with the transducer capsule itself, making it ready to be used right out of the box.