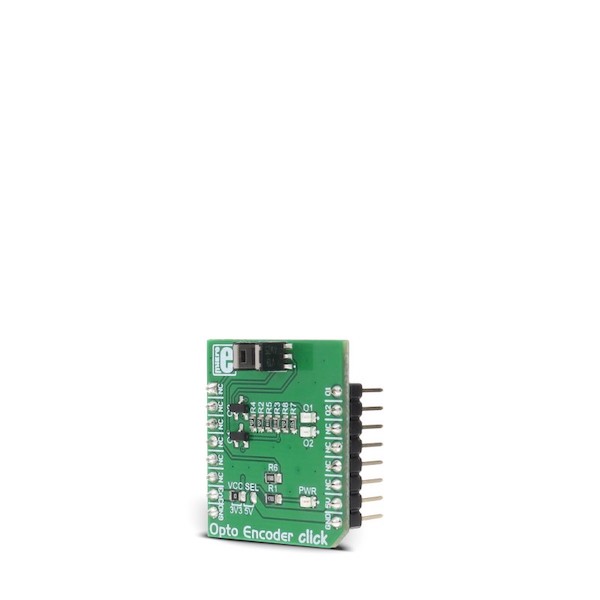 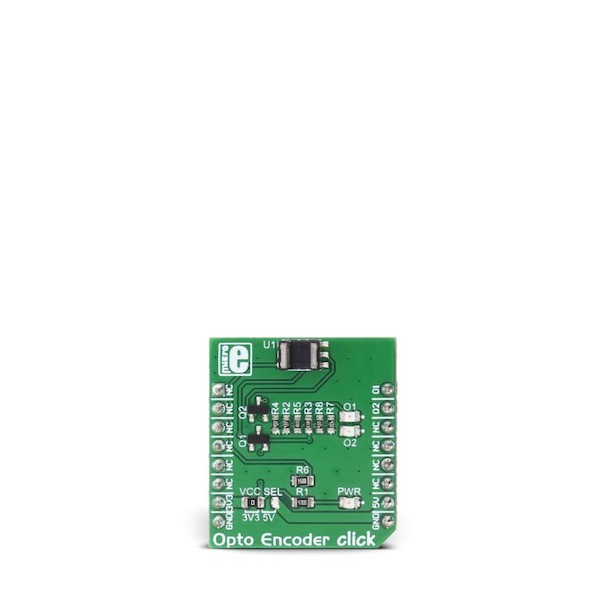 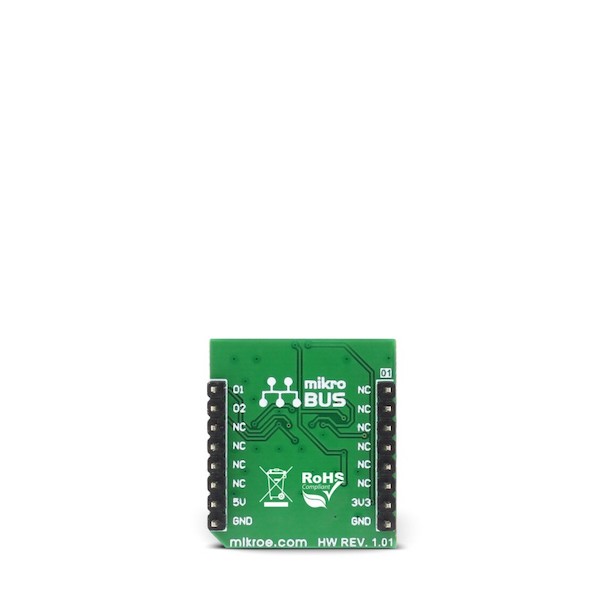 Opto Encoder Click is a linear incremental optical sensor/encoder Click which can be used for the movement or rotation encoding. Encoders of this type are widely used for many applications, which involve precise detection of the position, speed, or rotational angle of an object. Rotary encoders are often used for various types of controllers on many different devices. Whether it be a rotary encoder knob controller or an angle encoder on a motor shaft, the principle is the same - it includes an optical sensor, just like the one found on Opto Encoder Click.

The optical sensor used on the Opto Encoder Click is the TCUT1600X01, a tall dome dual channel transmissive optical sensor with phototransistor outputs from Vishay. This sensor is equipped with one infrared LED with the wavelength of 950nm, and two phototransistors. These phototransistors are positioned behind two small slits on the sensor, on the opposite side of the LED. They form two separate channels. When the transistors get illuminated by the LED, they become conductive. The collectors of these transistors are connected to the same pin, while their emitters are routed to two separate output pins of the TCUT1600X01 - E1 and E2. This allows the activity on both channels to be detected by the host MCU.

Since the signals of these two output channels are not enough to drive pins on a host MCU, the Click board™ features two additional MOSFETs. These MOSFETs are also used to drive two additional LEDs, which indicate activity of each channel. E1 and E2 pins are routed to the MOSFET gate pins, while the MOSFET drains are routed to the mikroBUS™ PWM and INT pins. These pins are pulled to a LOW logic level by the pull-down resistors, to avoid floating.

Signal encoding itself is done by the host MCU. Having two optical sensing channels, Opto Encoder Click has the ability of both speed and direction encoding. The most common usage is encoding of the step motor position: a cylinder with slits is physically mounted above the sensor so that the LED can illuminate the phototransistors only through these slits. By rotating this cylinder, the light beam will be blocked periodically. The single sensor output will be a pulse train, while the cylinder is rotating. Having two photo sensors physically distanced by a small amount, allows the pulse signal of the first sensor to be either delayed or expedited with respect to the pulse on the second sensor, depending on the rotational direction.

This Click board™ can operate with either 3.3V or 5V, allowing to be operated on both 3.3V and 5V MCUs. The onboard SMD jumper, labeled as the VCC SEL is used to select the operating voltage of the Opto Encoder Click.

Provided Click board™ library offers easy to use functions that can be used to get the encoder position. The provided example application demonstrates the usage of these functions and can be used for further custom development.