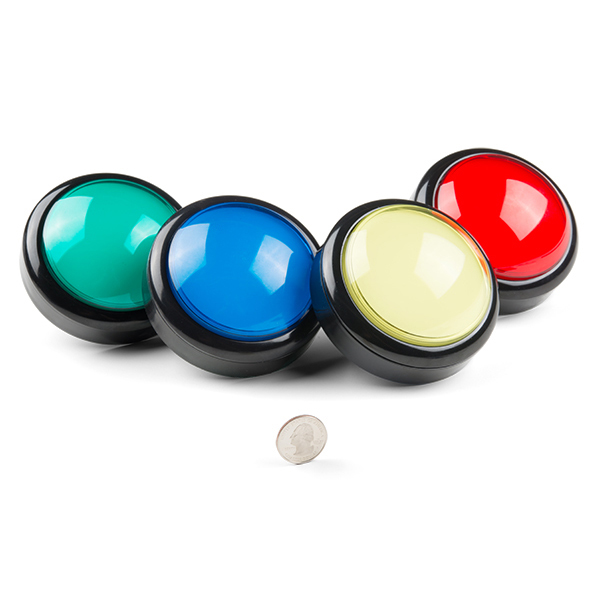 It's the end of the world, and you need a button to press. This is it. A 100mm diameter (outside diameter) dome illuminated push button comes with an LED, securing nut and a pre-installed long life horizontal microswitch. Button can also be adjusted to a low profile button by removing the middle ring.

Adding a Timed Button to a Project

This tutorial will walk you through making a timed power controller for interactive projects. You will learn how to add an on button that will provide power to your project for an amount of time and then turn off again.
Favorited Favorite 6

In case you have never used a microswitch or this push button before, here are some links to some tutorials that will help get you started.

To find information on modifying the Big Dome Push button with other LEDs, I recommend checking out this tutorial:

about 6 years ago by Member #634747 verified purchaser

Sturdy design and simple implementation. Great for any project with people (kids especially) who are going to be hard on it.

about 6 years ago by Member #824431 verified purchaser

These are nice looking and seem very sturdy. However, do not expect to flush/surface mount them unless you cut a hole where these will sit. The switch and assembly stick out the bottom about 1/2 inch. Please include a side photo showing how assembly sticks out further than the outside black plastic.

Also, one of the product photos seems a bit misleading as it appears wires are coming out of the bottom making us think these could just sit flush on a table.

about 6 years ago by raster verified purchaser

I've probably used a hundred of these over the years, and 99.9% of the time they've worked great. I did have one of them get worn out at a tradeshow after two years due to people repeatedly pounding on it, but besides that, they've been totally solid.

about 7 years ago by Member #349112 verified purchaser

This is by far one of the coolest buttons I own. It has a great click to it, and the LED lights the button very nicely.

about 6 years ago by Member #816671 verified purchaser

I had ordered 10 dome buttons for a project I was doing for school. All worked fine but one was missing the LED inside. When I let the company know, they replaced the whole switch! Good job, Sparkfun!!

about 5 years ago by roggesound verified purchaser

Everybody likes this button. It's solid, has different mounting options, comes with a good switch. I've been swapping the resistors on the LEDs for use with 5v. Lights up nice and bright.

It works as expected.

about 5 years ago by Member #489784 verified purchaser

Im am very happy with this device, it works fine in a toy I designed for my granddaughter. Although to make the light brighter, I took all parts apart, changed the LED and covered the inside bottom with aluminum, big difference. For the purpose of a toy makes it much more attractive.

about 4 years ago by Jeremy verified purchaser

This worked perfectly for what I was building. I 3D printed an enclosure for it and published it here: https://www.thingiverse.com/thing:2831058

about 7 years ago by Gizmoguy verified purchaser

I've gotten a few of these for different projects like a panic button for the home alarm, Lap timer, dog treat dispenser, etc. It has a good click and an LED to illuminate it. You can change the LED if you want a brighter button.

about 6 years ago by Member #751508 verified purchaser

Bought a red and green one. Made a podium for a family fued game at a Christmas party. They worked great. Good light from LEDs, add a few relays and you have an inexpensive board that the first button hit locks out the other. No arguments on who was first

about 6 years ago by Member #760001 verified purchaser

I used it as a prop for a video shoot so I needed to disassemble and reconfigure to suit my needs. It literally took a "pounding" and held up nicely (for the 10 hour shoot-day anyway)

about 6 years ago by jonhanford verified purchaser

Built a device using this that automatically mutes the tv for 15 seconds then unmutes it. Great for killing the most annoying commercials. Very Satisfying to mash the button and kill the buzz.