Retired KIT-15365 4
Note: Retired Product
This is a retired product. There is an updated version available: KIT-18486 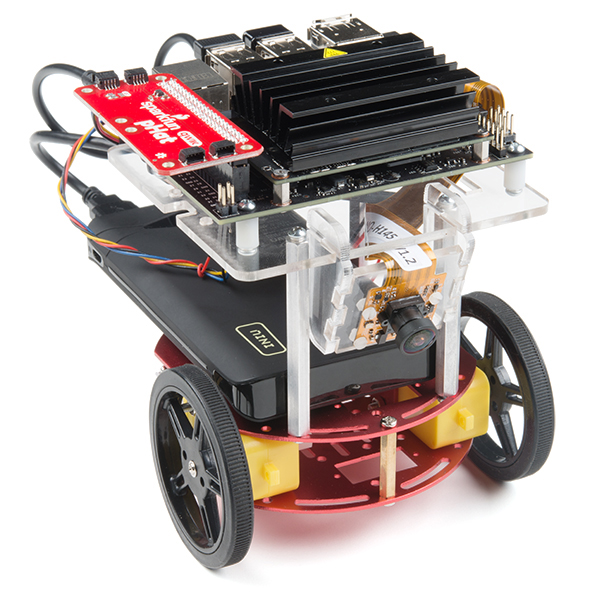 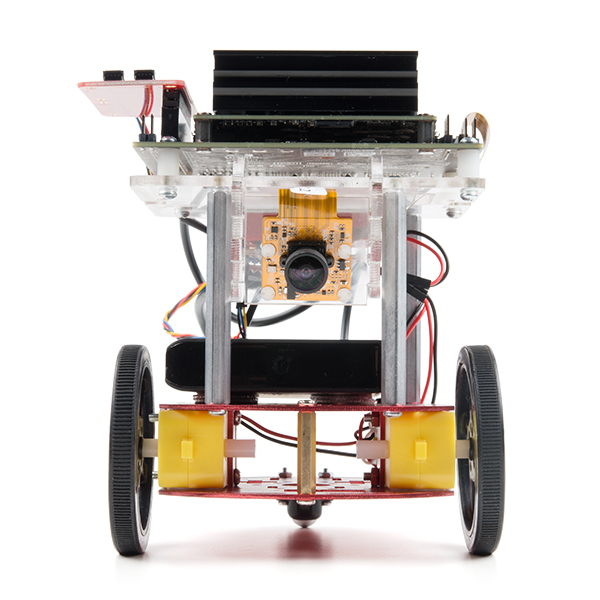 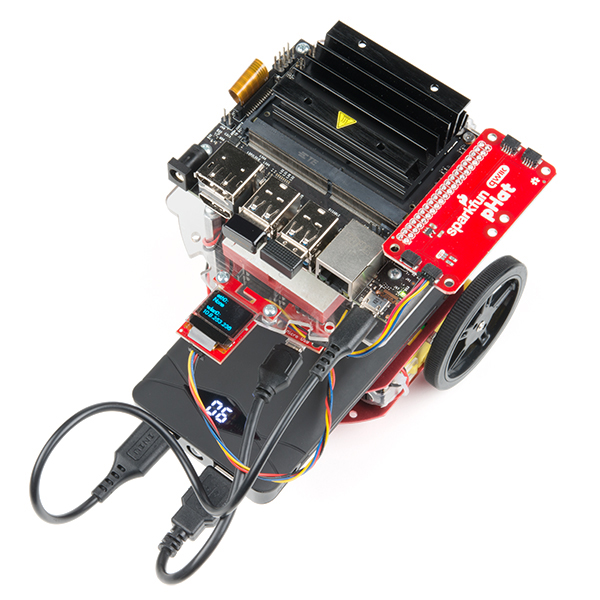 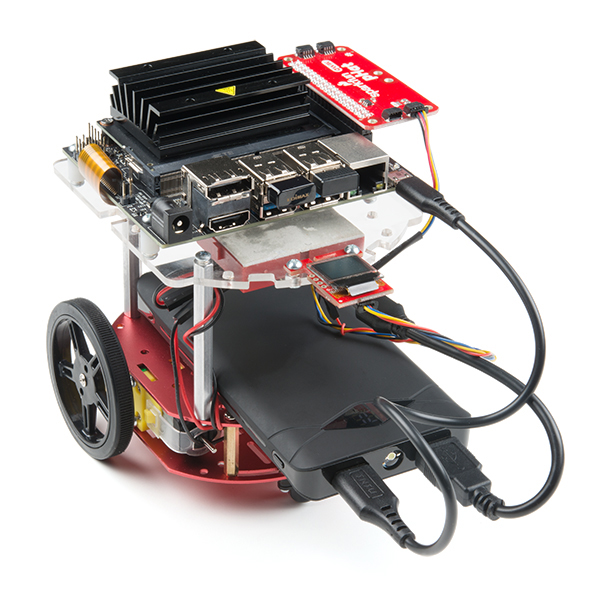 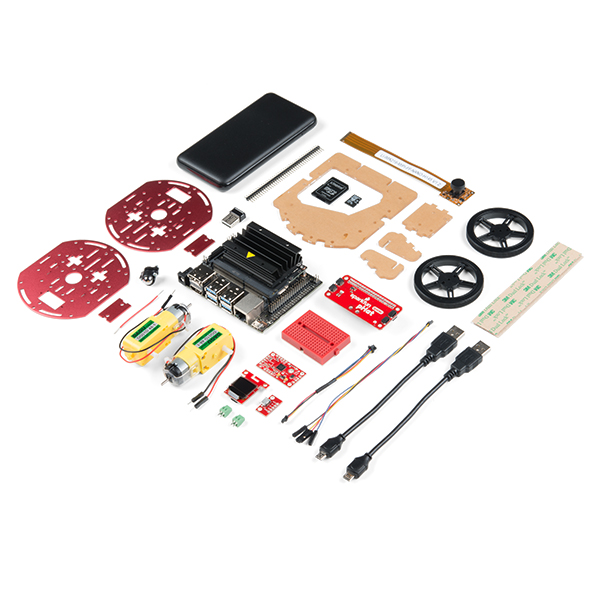 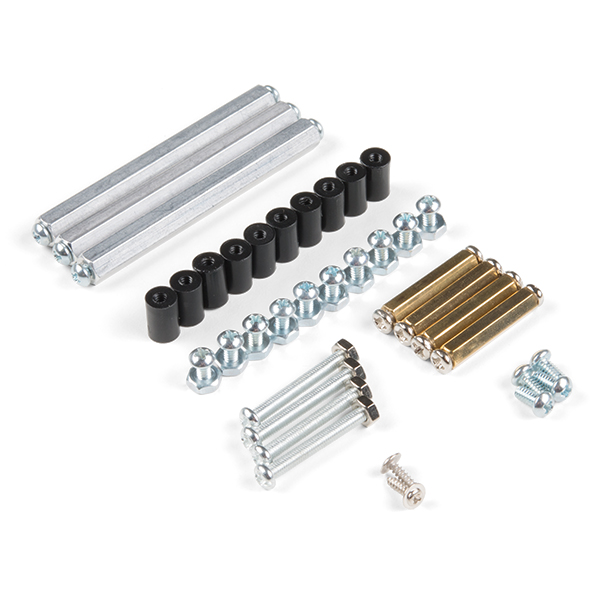 Retired KIT-15365
4
Note: Retired Product
This is a retired product. There is an updated version available: KIT-18486

The SparkFun JetBot AI Kit is a robot platform powered by the Jetson Nano Developer Kit by NVIDIA. This SparkFun kit is based on the open-source NVIDIA JetBot! We understand that not everyone has access to multiple 3D printers on each floor, and a whole warehouse of electronics so we wanted to build a kit from ready to assemble parts to get you up and running as quickly as possible. The SparkFun JetBot AI Kit is a great launchpad for creating entirely new AI projects for makers, students and enthusiasts who are interested in learning AI and building fun applications. It’s straightforward to set up and use and is compatible with many popular accessories. Several interactive tutorials show you how to harness the power of AI to teach the SparkFun JetBot to follow objects, avoid collisions and more. The Jetson Nano Developer Kit offers useful tools like the Jetson GPIO Python library, and is compatible with common sensors and peripherals; including some new python compatibility with the SparkFun Qwiic ecosystem.

Delivered with the advanced functionality of JetBot ROS (Robot Operating System) and AWS RoboMaker Ready with AWS IoT Greengrass already installed. SparkFun’s JetBot AI Kit is the only kit currently on the market ready to move beyond the standard JetBot examples and into the world of connected and intelligent robotics. Many other popular AI frameworks popular AI frameworks like TensorFlow, PyTorch, Caffe, and MXNet are supported, and Jetson Nano is capable of running multiple neural networks in parallel to process data and drive action. Please be aware that the ability to run multiple neural networks in parallel may only be possible with a full 5V-4A power supply.

This kit includes everything you need to get started with JetBot minus a Phillips head screwdriver, a basic soldering setup, and an Ubuntu desktop GUI. If you need these, check out the includes tabs for some suggestions from our catalog.

Get Started With the Assembly Guide for SparkFun JetBot AI Kit

Items not Included but you will need:

First: if you do buy one, read the jetbot assembly instructions before you do any of the instructions included in the Jetson Nano box! (Basically, the SDHC card is already flashed. Don't install NVIDIA's image.)

I assembled it in less than a day. It does require soldering, so I needed to brush up on that. I've run it with some of the examples. It comes with a Jupyter notebook with examples that are clear. Seems to be fully functioning. (The cats were very interested.)

Now for the two areas that could be improved. The WiFi driver doesn't work at boot up. Reloading the driver ("sudo rmmod 8723bu" followed by "sudo modprobe rtl8723bu") seems to get the driver working correctly. I haven't figured out how to do this automatically post-boot, so I have to hook the Jetson Nano to a monitor/keyboard/mouse before being able to do this. I suspect connecting the Jetson to Wired ethernet would let you log in from another device to reload the wifi driver, without keyboard/video/mouse. Second issue: the bot doesn't have a front bumper. If it runs into something -- and it will -- the camera will take the impact.

With a little bit of elbow grease and easy follow written and video instructions, the kit can be built with lease efforts. It come with everything you need to get the system up and running in no time. What's even greater is that you don't need to worry about customer support in comparison to overseas based companies'. SparkFun has by far the most responsive email support and it ships out any replacement parts in no time if necessary. I am highly impressed by both product quality and customer support (especially many thanks to Chris F.)

Thus far a great kit to meet our needs!

about 2 years ago by Member #657254 verified purchaser

We have only just completed the assembly of this kit for a research project with NASA, so we could say more after a few months of use.

The assembly was clear by the instructions and straight forward. Our only issue thus far ... the Velco substitute is interesting, but is difficult to make attach properly. We have replaced this with Velco for ease and security. The kit booted immediately and we were on a desktop getting setup easily and quickly.

From our understanding of the capacity of the Jetbot, this will be exciting and easy to use. More in the future!

Jury is still out.

Nano works fine in standalone, (W/128 Gig card) does not boot in Bot mode, have downloaded the Zip file twice to make sure there was no corruption in transit, Etcher app chokes on the .ZIP file, suspect the archive has a problem. Plex plate for Camera mount needs 2 small recesses to allow the PC board of the Camera to lay flat. I think the Velcro for the Battery is far too stiff and would try replacing it with 1 in wide standard glue back Hook & Pile.