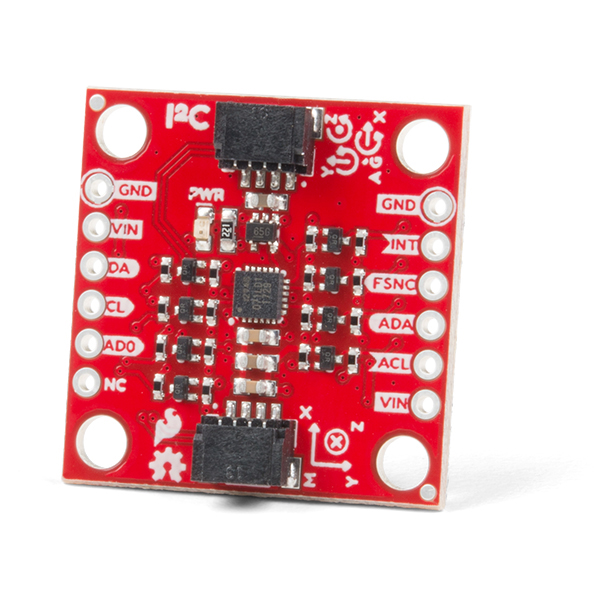 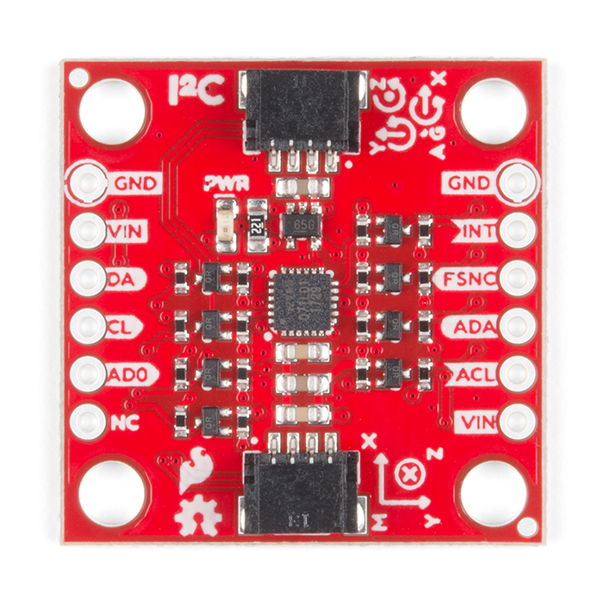 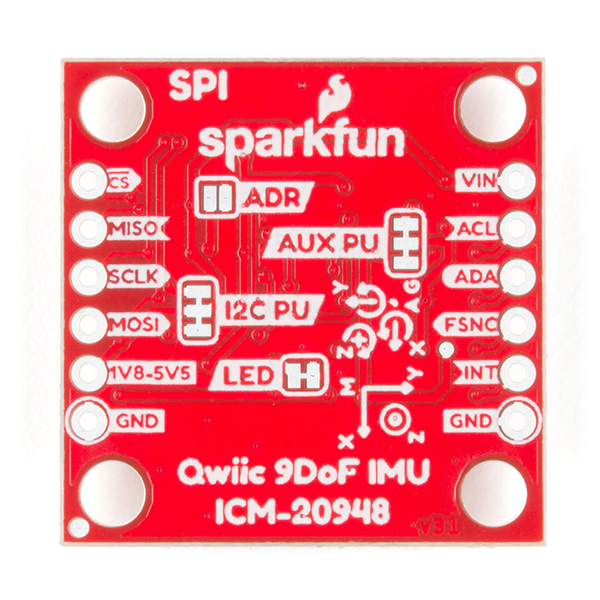 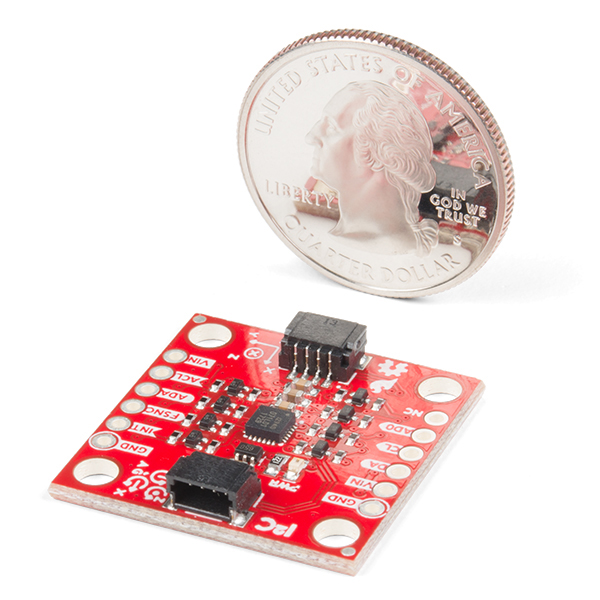 The SparkFun 9DoF IMU Breakout incorporates all the amazing features of Invensense's ICM-20948 into a Qwiic-enabled breakout board complete with a logic shifter and broken out GPIO pins for all your motion sensing needs. The ICM-20948 itself is an extremely low powered, I2C and SPI enabled 9-axis motion tracking device that is ideally suited for smartphones, tablets, wearable sensors, and IoT applications. Utilizing our handy Qwiic system, no soldering is required to connect it to the rest of your system. However, we still have broken out 0.1"-spaced pins in case you prefer to use a breadboard.

In addition to the 3-Axis Gyroscope with four selectable ranges, 3-Axis Accelerometer, again with four selectable ranges, and 3-axis magnetometer with an FSR to ±4900µT, the ICM-20948 also includes a Digital Motion Processor that offloads the computation of motion sensing algorithms from the detectors, allowing optimal performance of the sensors. We've also broken out all the ICM-20948 pin functionality to GPIO and labeled them I2C on the front, SPI on the back for ease of identification.

Note: The I2C address of the ICM-20948 is 0x69 and is jumper selectable to 0x68. A multiplexer/Mux is required to communicate to multiple ICM-20948 sensors on a single bus. If you need to use more than one ICM-20948 sensor consider using the Qwiic Mux Breakout.

Get Started with the SparkFun ICM-20948 9DoF IMU Guide

How to use the SparkFun 9DoF ICM-20948 breakout board for your motion sensing projects. This breakout is ideal for wearable sensors and IoT applications.
Favorited Favorite 1

about 3 years ago by Member #517941 verified purchaser

I bought two of these and they both work really well. I'm using the gyroscope to control a mouse and am impressed with the accuracy from the chip. I did had an issue combining this board with another I2C device when using the basic example. Switching to the advanced example (which included additional configuration) resolved this issue. The qwiic connect ports make this an easy device to prototype with.

Great breakout board of a great IMU

I bought three of these for a project and they all perform nicely. The datasheet provides information for basic operation; initializing, calibration and settings, reading sensor data etc. Wasn't able to get the DMP working, however. InvenSense doesn't provide information on the DMP to just anyone I guess. Very capable little device and easy to hook up with the Qwiic connectors. Thanks!

about 3 years ago by Member #589719 verified purchaser

This works worse than the Ebay 6050 Gyroscope for $5. The x,y,z data have massive spikes even though the unit is at rest. I researched this and Sprkfun has no solution. Ill try to return it but do yourself a favor and do not purchase this.

Sorry to hear you're having trouble! Please contact our technical assistance team for help resolving your issue.

Just starting to use part. The software documentation is pretty poor. The base interface is in C but it seems to be primarily oriented toward Arduino CPP. Since I need just C, it was a chore digging out the C interfaces needed. Each C function should have a description and good comments as to what the sub-function are doing. The interface to the IMC-20948 is complicated, but the interface software should make it simple so that the details for setting up the modes do not need to be seen or understood bu the application programmer. All I really wanted to do was initialize the thing and get magnetometer readings from it. Interfacing to the software should be as simple as interfacing to the hardware unit.

I like these things because I like to try to make them work with my own programs. I use Python3, not using the canned SPI software, which is difficult for me to understand. Making it yourself takes digging deep into the docs, but the satisfaction at the end is well worth the trouble. Since I cannot create my own circuit boards, I love it the SparkFun makes these for me. Thanks SparkFun. Keep it up. If any of you would like my small, simple Python script to make this work, drop me a line at joelindo@comcast.net