Yes, you read it right. Port-O-Rotary. We've gone and hacked into a rotary phone.

I find myself talking about nerd things with my friends and peers who could usually careless. Every once and a while, someone who really doesn't have a clue, says something so crazy, it makes you take a step back. I can't remember who had the idea of a rotary cell phone - needless to say it had something to do with quite a few rum and cokes. They didn't have a clue how to do it, they just thought it would be cool. So did I...

Why wouldn't it be cool to see a rotary phone, ringing, with no wires attached? It might mess with your brain a bit.

Turns out I am very glad there is no such thing as a cellular rotary phone - the dialing takes forever! And here in Colorado - on a 10-digit dialing system - you don't dare mess up the number.

So here it is - a portable cellular rotary phone - in all it's random glory!

Want to buy one?

Find the phone on Ebay -

Where do you even buy a rotary phone these days? Oddly enough, there are quite a few phones on Froogle that had push buttons within the faux rotary face. That won't do.

How about the Senior Store! No really - they sell rotary phones for seniors. Cool, but $49.95 is a bit too much. BoldOldPhones is also another great resource for rotary phones. They even have colors!

Where else to look? Ebay of course! You can find anything! There are quite a few people selling rotarys of different qualities and ages on Ebay. Most are ~$20. We got our 1957 'Automatic Electric Company' rotary phone for $10 + $8 in shipping. Not too shabby. 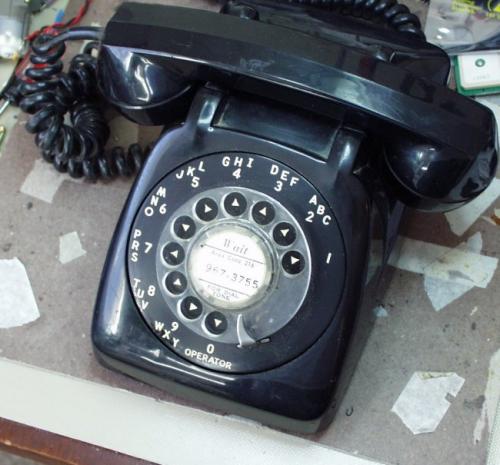 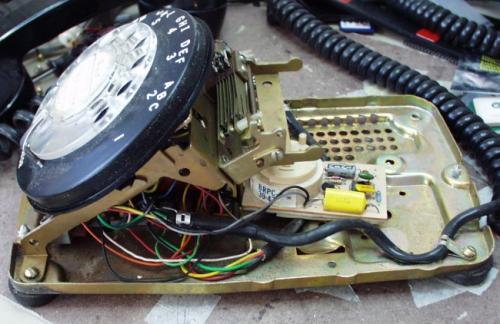 Whoops. The auction alluded to the 'original tone ringer' which looks like they meant the phone was upgraded. Oh well - I'll have to find another rotary with the old bell type ringer for Port-O-Rotary v2. 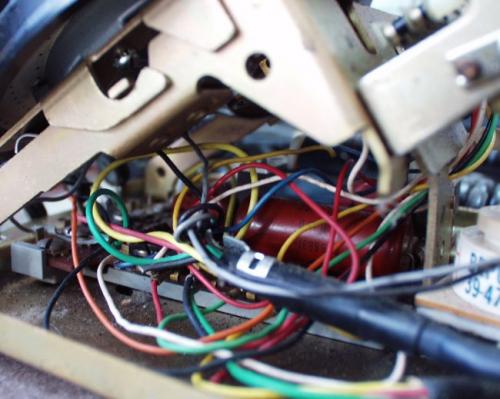 What a mess of wires! 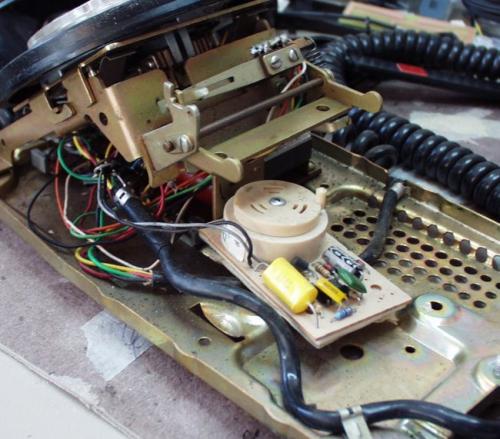 The phone was a bit dirty (not bad for nearly 50 years of age) but was easily disassembled. 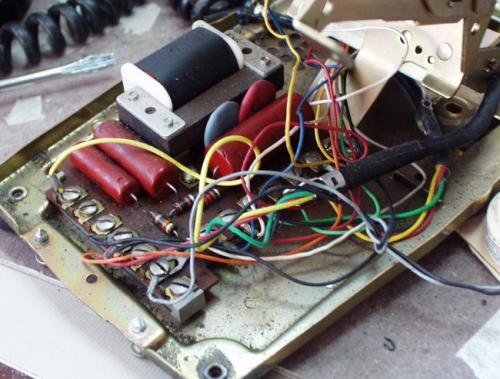 Now those are some components! Time to replace them with technology of the 21st century. I tore the phone apart, wiped everything down with some warm water and elbow grease. On a side note, I think the previous owner was a smoker...

Let's take a look at the actual rotary and how it functions. 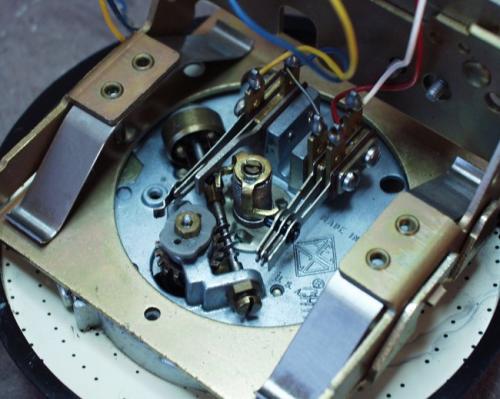 Here's a couple photos of the rotary element up close to help you get an idea of what is going on. Basically, the entire system is just the opening and closing of switches. 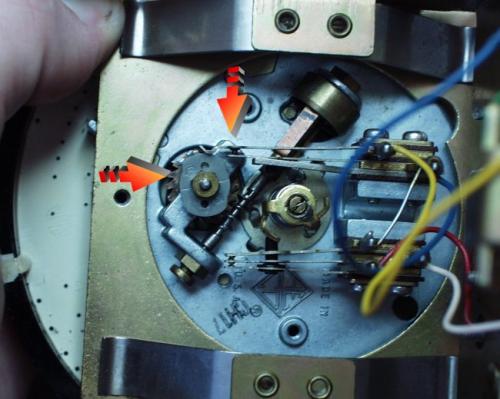 When you twist the rotary around, nothing much happens. When you let the rotary go, the dial starts turning back to its original position. As it does this, the grey oblong wheel spins once for every two numbers. Two numbers? That seems silly. Actually, it makes it very easy. This picture is about as good as it gets and it's still not very good. You can see the top two paddles slightly further apart. There seems to be some nice liquid gel that is protecting the paddles so they never actually have an visible open space. But if you hook up a resistance meter, sure nuf, the thing is toggling on/off. Ok, that seems easy enough. 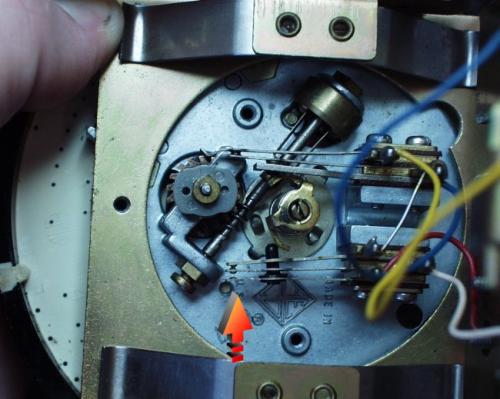 Now this is another important picture. This is the rotary in the finished, or non-turning position. Take a look at the bottom three paddles. When the dial has returned to the finished state, the center brass column exhorts pressure on the black pin, opening the very bottom paddle. Thus, you can tell when the rotary is finished spinning! Ohhh, this is almost too easy! Now we just need a PIC to take a look at the on/off clicks. 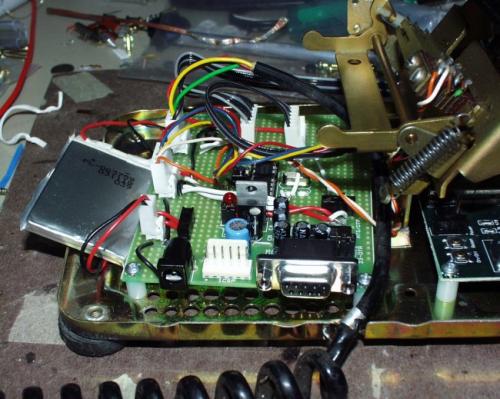 Here we have an 18 pin development board with the 16F88 loaded onto it. I used the Bloader/Screamer boot loader pair. 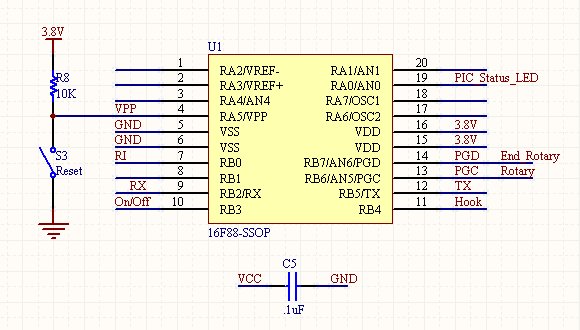 Here are the connections to the various pins. This is a SSOP version that is being design into another PCB but just imagine it's a 18-pin DIP. No crystal, uses the internal 8MHz because at 3.8V on a non-16LF88 part, we'd better be careful.

So with the internal pull-ups on, 'End_Rotary' will see a '1' while the user has activated a number and the rotary is returning - and a '0' when the rotary is in the normal sitting position.

Now for some firmware!

This is the loop that decodes the clicks from dialing. We always need to be on the look out for when the user hangs up the phone so there are a lot of conditionals. I guess you could call it a state machine, but it's just C code to me.

We wait for the switch to open and close. Throw in some delays to ignore the bouncing and we've got it! Once END_ROTARY = 1 dialed_number will contain the number dialed + 1 (remember the extra click on everything?).

dialed_number--; //Rotary always has one extra closure that must be taken off

Here we are manipulating the dialed number (subtracting 1) and the zero/operator case. Then we clean things up a bit for printing. 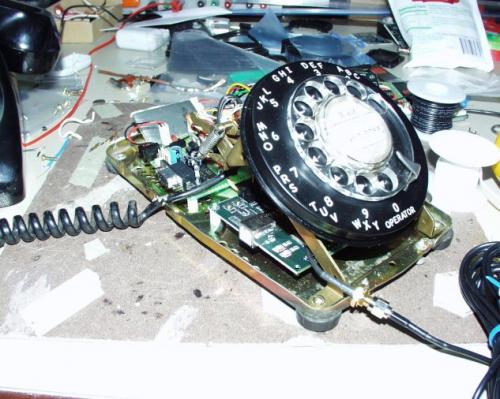 It works very well! You dial 3035551234 and hyperterminal will spit back "303-555-1234". The firmware took a surprisingly small amount of time. Who know this old hardware would mate so nicely with something 50 years later?

Now let's talk about the actual cell phone part of things. The GM862 is a fantastic fit for this project. It can be directly connected to by the PIC running at 3.8V and the PIC can control the phone dialing by simple AT commands. 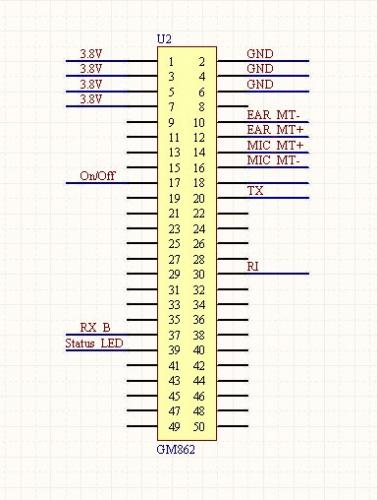 Here are the pin connections to the GM862. If you read into the 1000+ pages of datasheet for the GM862, it can be a little discouraging. The designers provide/recommend all sorts of circuitry to interface an electret microphone and speaker to the module. I had no idea what I was up against. 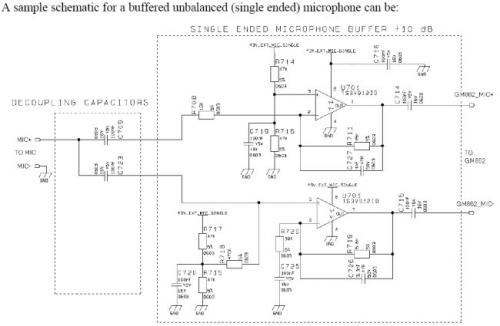 Ugh. And I didn't even know the characteristics of the 50 year old phone handset. What to do?

Well the speaker dry-tested at 60Ohm. That seems reasonable. And the datasheet states that the module can drive most small speakers directly. So I stripped the four handset wires and traced them to the speaker and mic. I  hooked up the handle with the speaker attached to EAR MT +/- and phoned home. Holy smokes. I can hear me! 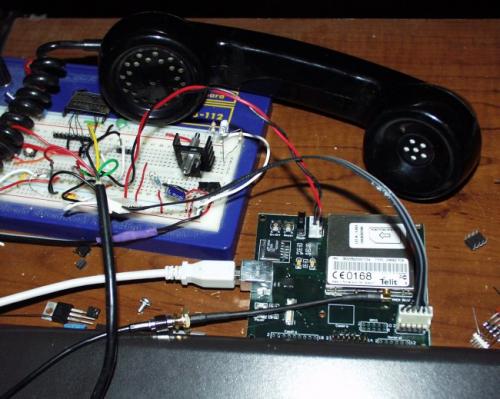 Here we have the GM862 attached to a custom breakout PCB and the handset. No kidding - it worked!

Next trick was to get the MIC kicking. I was taken back to the old Opamp days of audio. I should be able to amplify whatever is coming out of the microphone and clean it up, blah blah blah. So I hooked up a simple 30 gain Opamp with a trimpot and scoped the output. Sure enough, I was getting some nasty ringing, but I could see the signal was 0-5V - I was basically railing the opamp. Ok, that's some amplification. How much does the GM862 need?

Wait a second - 360mV Peak to peak? But, that's like nothing. So I disconnected the opamp and probed the microphone on the handset directly. I biased the (what I assumed to be) electret mic with a 4.7k resistor and a 10uF electrolytic decoupling cap:

I got 300mV P-P! Yep. I circumvented an entire layout with a cap and a resistor. This just proves my theory that you should think less and wire more. While this solution has some noticeable quality issues, that's not the point - it just has to work!

So I wired up the MIC very carefully to the GM862 along with the speaker and I placed a call. It was the ugliest phone I've every seen with an antenna laid out across the room near the window, a 1950s style handset, and a bunch of wires and boards. But I called! I called my other cell phone and talked to myself, but that's besides the point... My girlfriend probably didn't want a call at midnight just so I could ask her "Guess what I'm calling from?"

The GM862 needs 3.8V at a peak of 2A. This is really screwy because most linear regulators can't handle these peaks and give off a lot of heat when regulating 10-15V from a wall wart down to 3.8V. Besides, the entire thing was supposed to be portable. Time for batteries! 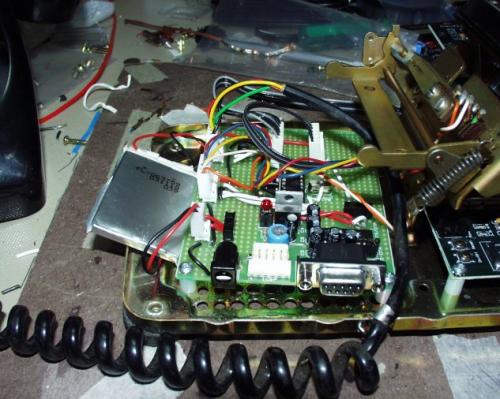 You can see here, I have a Polymer Lithium Ion battery off to the left. These batteries are extremely small, light weight, juicy (this one is 750mA), and run at 3.7V. Perfect! I also have a few 2000mA cells which, in parallel, could run the phone for a good two weeks! So I run the entire system directly off the battery with no voltage regulators and no heat worries! Just a simple on/off switch and we're set to go.

We've got system powered, the rotary decoded, now all we need to do is send this decoded phone number to the GM862. 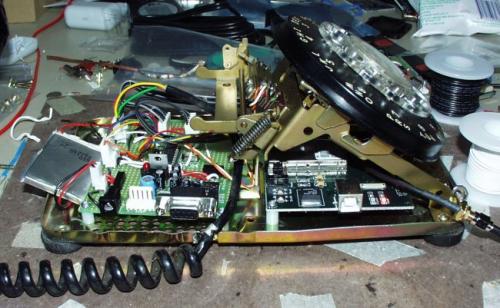 I used the PIC's onboard UART to interface both the debugging/programming and the GM862 communication. This posed a problem in that the MAX232 IC would compete with the GM862 if both RX lines were tied together (GM862 and MAX232 would both try to drive this line high or low - it's called bus contention and could fry stuff). So I isolated the RX bus with a toggle switch connected to the PIC - one position for the MAX232, one for the GM862.

We've got the number, all the PIC does is send a serial string to the GM862. ' ' is the C command for return. So the PIC hits enter, and then sends 'atd ##########' and then hits return again. If received correctly, the GM862 will dial the number and place the call. The PIC doesn't check anything. So if the GM862 is not connected to the network, or can't get a signal, or just plain off, the PIC doesn't know and assumes all is well. This type of error detection/correction is simple enough, but I left it out for simplicity's sake.

Once the PIC detects the phone is back on the hook (HOOK == 1), the PIC sends the 'ath' command to hang up and hits enter. The GM862 should kill the call and all should be well...

Now we've got to get this thing into its new home! 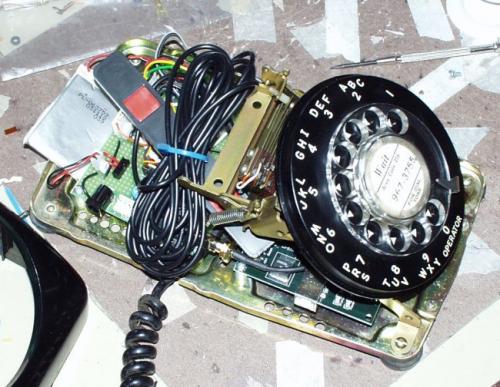 The Tri-band Cellular Antenna has 10' of RG174 cable that could be trimmed off, but I left the cable intact for future projects. I am going to try an etched antenna with a short 4" cable very soon. 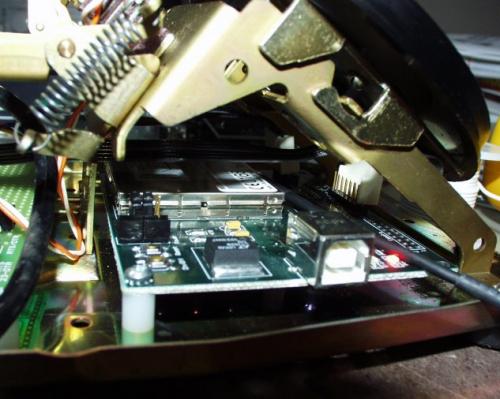 There's the GM862 breakout jammed underneath the rotary. I used two 6-pin ribbon cables to make the connections to the PIC board. 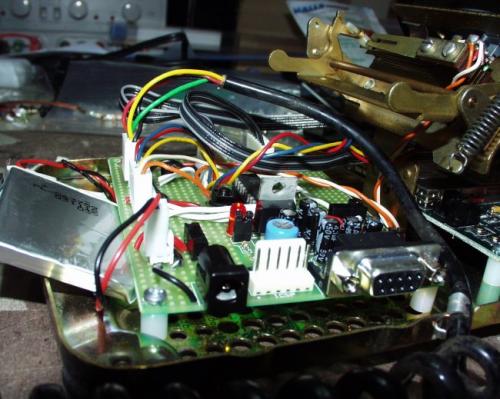 There's the PIC board and battery. 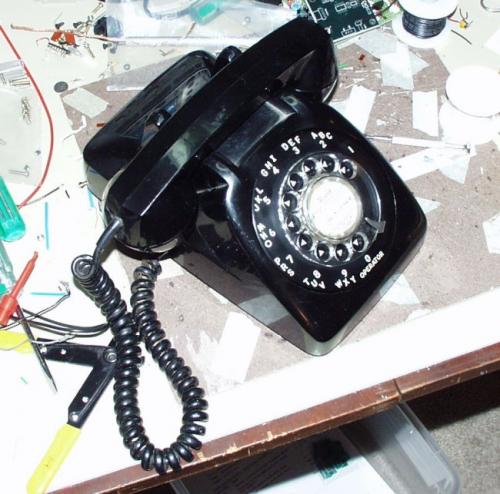 The functionality is there and it only took a days worth of work! The phone can dial out and call any number you want. It's really a trip. But the sound is a little scratchy (go figure), and the dialing doesn't always work. I think there is a bug in the firmware and a problem with my cellular plan - it always seems to be on roaming. Once I get a good cell connection, things should improve dramatically.

As usual, let us know what you think.