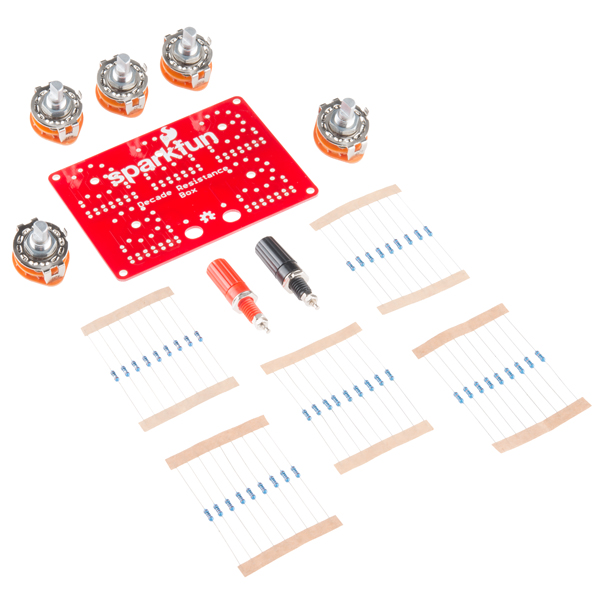 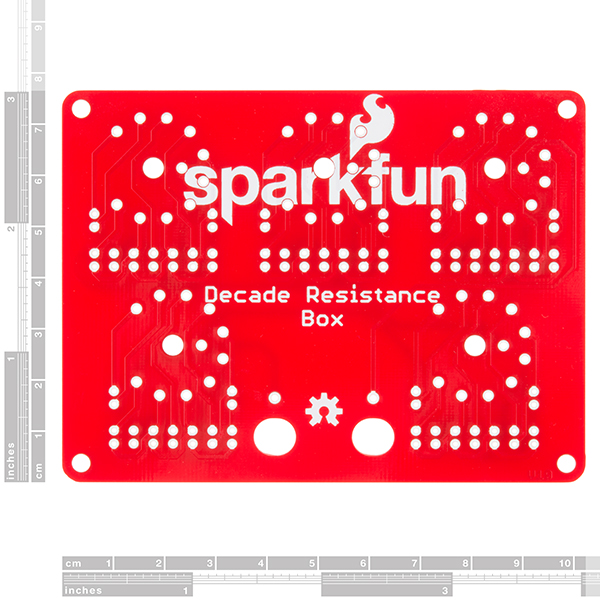 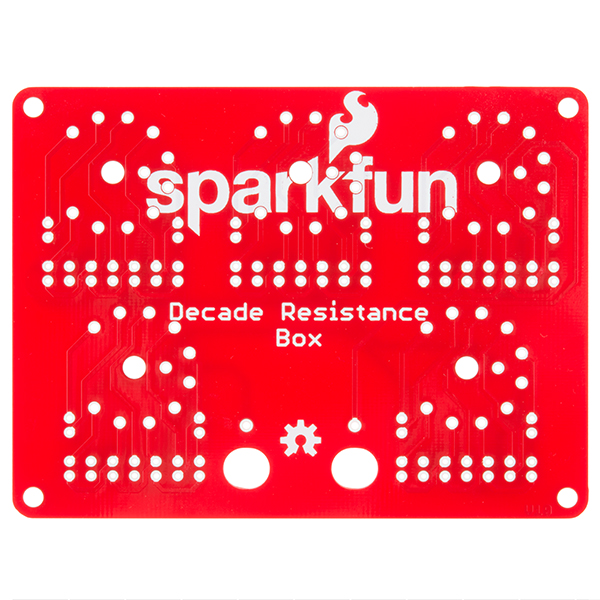 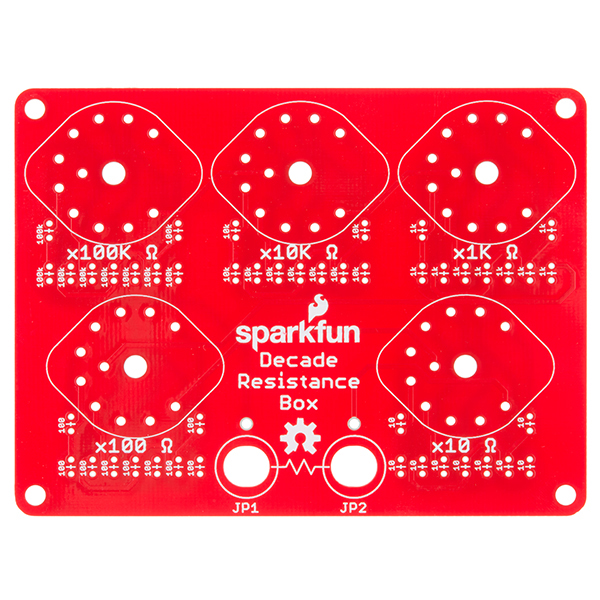 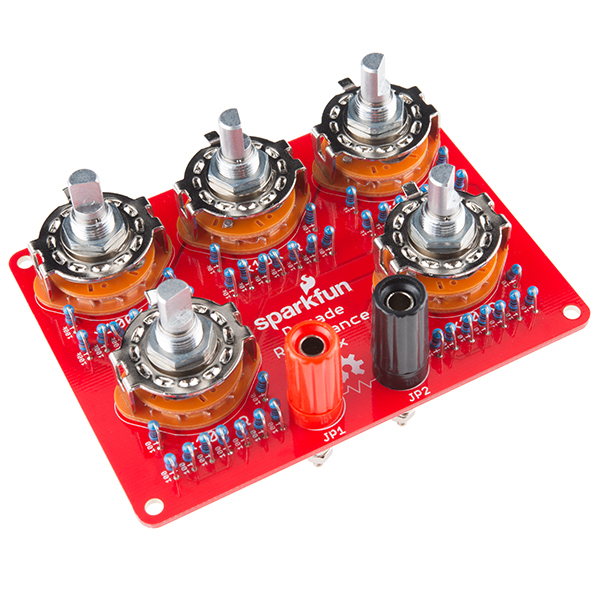 This is the SparkFun Decade Resistance Box, an involved PTH soldering kit that allows you to quickly and accurately dial in a specific resistance value between 0 and 999,990 Ω, in 10 Ω increments. The concept is simple, a decade box is a tool that contains resistors of many values that can be accessed via mechanical switches. All you need to do is just adjust the knobs to output any of the discrete resistances offered by the box. Once assembled, each kit will have controls that correspond to the digits in a decimal number - a control for the tens position, a control for the hundreds position, and so on.

The SparkFun Decade Resistance Box not only provides a challenging soldering experience but also a great tool for any workbench. In the Documents section below you will find an in depth Hookup Guide that provides you with assembly instructions, an enclosure walkthrough, and an operation guide.

Note: The rotary switches included with the Decade Resistance Box can be very difficult to turn! Make sure to check out the Recommended Products section below for knobs that will work with this kit.

How to assemble the decade resistance box, then use it as a design and measurement tool.
Favorited Favorite 2

about 7 years ago by Member #395660 verified purchaser

Excellent overall. Parts, PCB, switches, resistors, everything is top quality. Soldering and assembling is easy. A bit hard to use without knobs though. I guess this kit could even be a great exercise for a beginner. Value for money !

about 8 years ago by Member #489680 verified purchaser

You are my 'go to website' when I need parts. I'm in Kansas, so shipping is always fast for me.

Great addition to my test bench

about 8 years ago by Member #588516 verified purchaser

This is a well-designed kit. Excellent assembly instructions which include some good tips for using the Box. Fun and easy to put together - the board is well-marked. Uses 1-percent resistors which is close enough for my work. I bought the optional aluminum box to mount it in. The kit comes with a hole drilling guide or you can use the PCB for the marking guide - the instructions show exactly how to do this. The Decade Resistance Box instructions also include a link to a .pdf file you can print out to make a faceplate for the box.

about 8 years ago by rben13 verified purchaser

I mounted this in an aluminum box. It works great, it's a lot more compact than the Elenco resistor box I've been using, so I'm getting another.

I've built my second resistor box, now. It's incredibly useful when I need an odd resistor value for a circuit I'm prototyping. I replaced the banana plugs with some I bought from Mouser because I wanted plugs of the same color and a bit better quality.

If you build the box and the resistance, when everything is turned to zero, is higher than zero, say more than 1 Ohm, be sure to check your soldering joints.

about 8 years ago by Member #126720 verified purchaser

Parts are excellent quality. Would have liked to see a panel label included.

about 8 years ago by Member #581494 verified purchaser

Loved the quality of your work of art! One warning, don't solder to the banana jacks............One buyer complained about it being a short circuit if all dials are set to "0". I think that's the definition of "zero Ohms". Only problem is trying to open the .SVG file for a front panel. Couldn't open it, or convert it to another format. Engraving shop couldn't open it, but did lay out a beautiful job. Cost only $48.00 US! Could you furnish the panel in another format?

Must have for any electronics work bench.

Being able to quickly dial up just the right resistance is such a time saver when working on electronics projects. No more rummaging through different resistors looking for just the right one.

Thanks for sharing your build video! Great job!

The kit comes with resistors that are accurate enough for the average home-gamer. The rotary switches are very good quality, and the overall quality of the board is great as expected from Sparkfun. Best of all, you get the chance to assemble it yourself.

about 2 years ago by nathan.tomlin verified purchaser

I made 3 but used precision metal film resistors 0.1% instead of the resistors it came with. The hookup guide is great.

about 8 years ago by anhume verified purchaser

But not built yet - lots of soldering

about 8 years ago by Member #156628 verified purchaser

It's a pile of resistors, a big pile of them, and that about it. It's a good replacement for the potentiometers I've been using for guessing correct values. Now I can guess right values and get an accurateish reading at the same time. I wish there was an easy option for a case, however they do post a tutorial on how to make just about anything into a working case for this "boxless" resistance box. For the price, it's a nice step-up from anything else I've seen cheap, and nowhere near as expensive if you don't need an additional decimal place.

about 8 years ago by Member #563096 verified purchaser

Easy to build and works like a charm. Very useful in bread boarding circuits. Has been built into a nice case with a face plate. Highly recommend this kit.

Easy to assemble. Very good quality PCB. Does exactly what I needed, for a fraction of the price.

about 5 years ago by Member #727914 verified purchaser

This was the lowest cost decade resistance box I've found, and Sparkfun, as usual, provides excellent online documentation for the kit, including a 'front-panel' legend that you can print out and mount on whatever enclosure you use. The kit itself is quite straightforward to assemble, and should prove fairly easy to complete for anyone with moderate soldering skills and knowledge of circuits. The PCB is high quality and the assembled board worked fine on the first attempt.

Sparkfun also sells a sturdy aluminum enclosure that will fit the board perfectly, but you'll have to drill out holes for all the rotary switches and and the terminal connectors. You'll also want to purchase some knobs for the rotary switches.