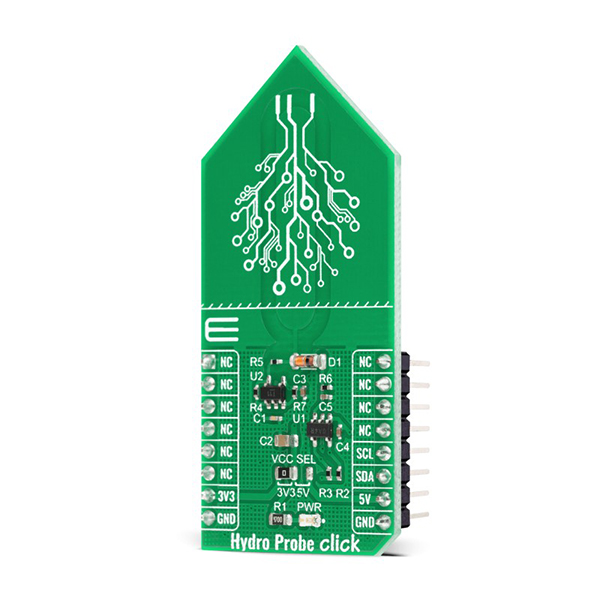 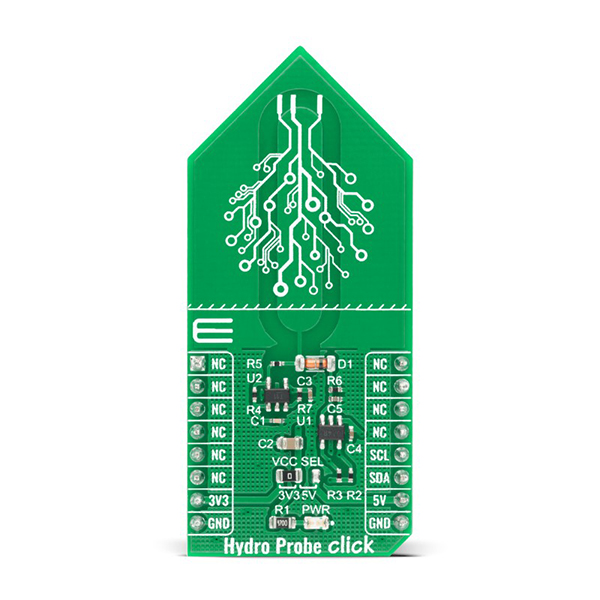 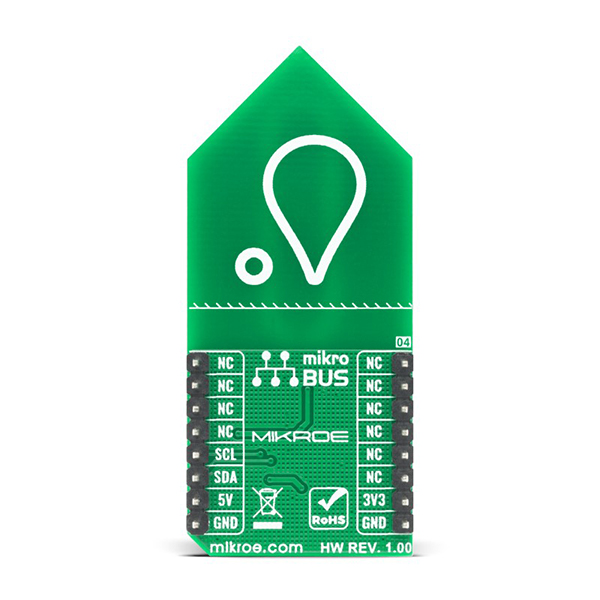 MIKROE Hydro Probe Click is a capacitive soil moisture sensor based on capacitive changes that are used to detect the volumetric water content in the soil. Water detection is achieved by using function oscillator MIC1557 and ADC converter MCP3221 from Microchip, which allow you to convert moisture presents to the digital value. Compared to resistant soil moisture sensors, its capacitive style reduces electrode erosion making it corrosion resistant and a better choice for applications such as soil moisture detection and automatic plant watering. Besides that, Hydro Probe Click can also be used in agriculture usage, household usage for gardeners, research and forecast, and many more.

Hydro Probe Click uses the capacitive soil moisture sensor based on capacitive changes that are used to detect the volumetric water content of the soil. It based its operation on capacitive measurement, which has a great advantage over resistive measurement. Compared with resistive soil moisture sensors, capacitive sensors do not require direct exposure of the metal electrodes, which can significantly reduce the erosion of the electrodes. This Click board™ can only qualitatively test the humidity of the soil and can’t measure quantitatively. When the humidity of the soil rises, the value of the output decreases; conversely, when the humidity decreases, the output value becomes higher. It operates with a flexible power supply voltage range which makes it suitable for 3.3V and 5V MCUs.

Hydro Probe Click performs its function as capacitive soil moisture sensor by using two main components, CMOS RC oscillator MIC1557 and 12-bit A/D converter MCP3221 with I2C serial interface. Oscillator frequency is set to 600kHz. From the oscillator, a signal goes to the soil moisture probe through a 10k resistor, these two elements act as a low pass filter for the oscillator signal. The output analog signal from the capacitive probe goes through diode to the MCP3221, A/D converter with 12-bit resolution, which converts that data and sends it to MCU. Communication to the MCP3221 is performed using a 2-wire I2C serial interface with available standard (100 kHz) or fast (400 kHz) mode. To be sure that you received correct data, calibration of the Hydro Probe Click needs to be done. The final output value is affected by probe insertion depth and how tight the soil packed around it is. It‘s recommended that the probe should not be placed on the depth which crosses the limit line on the Click board.

This Click board™ uses the I2C communication interface and can be supplied and interfaced with both 3.3V and 5V supply voltage. The on board SMD jumper labeled as VCC SEL allows voltage selection for interfacing with both 3.3V and 5V microcontrollers. More information about integrated circuits on this board can be found in the attached datasheets. However, this Click board™ comes equipped with a library that contains easy to use functions and a usage example that may be used as a reference for the development.