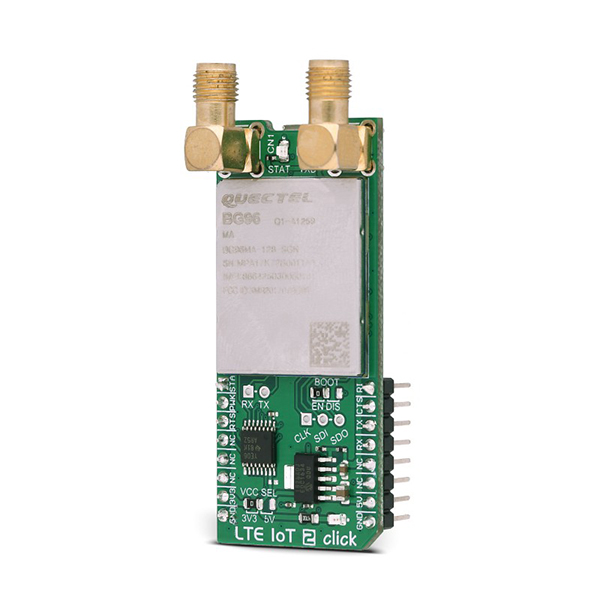 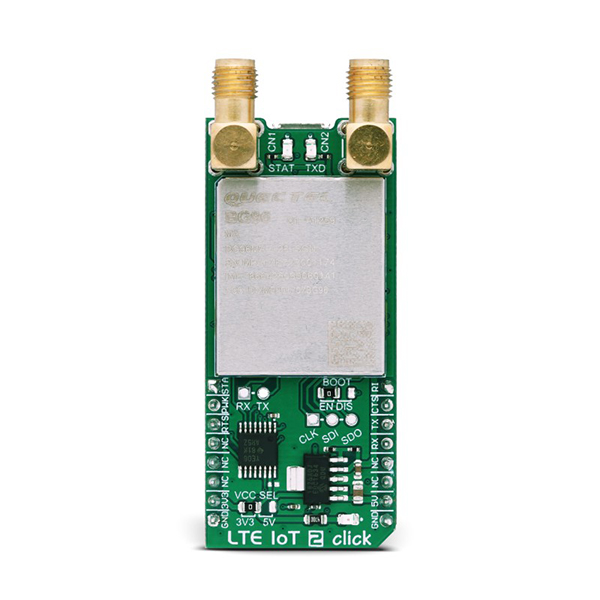 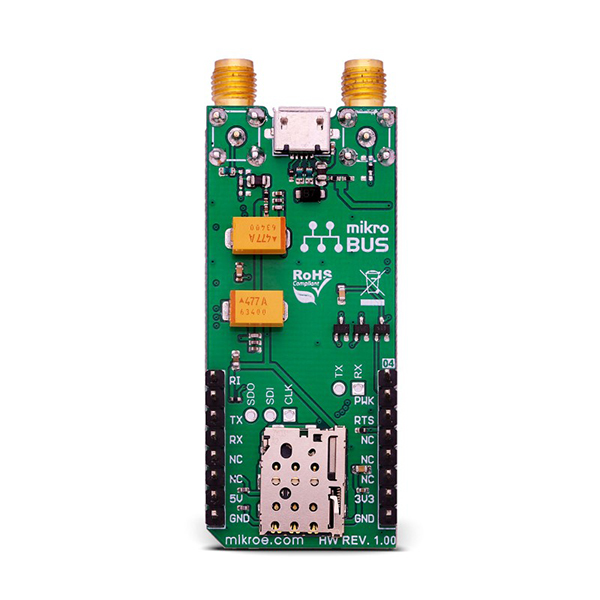 MIKROE LTE IoT 2 Click is a Click board™ that allows connection to the LTE networks, featuring Quectel BG96 LTE module, which offers two LTE technologies aimed at Machine to Machine communication (M2M) and Internet of Things (IoT). This module is an embedded IoT communication solution which supports the LTE Cat M1 and NB1 technologies, offering an alternative to similar Low Power Wide Area Network (LPWAN) solutions, such as the ones provided by Sigfox and LoRa. The LTE CAT1 and NB1 technologies are designed with specific requirements of the IoT network in mind. LTE IoT 2 click also offers various other features, allowing simple and reliable connection to these new 3GPP IoT technologies.

Two SMA connectors on board for the main and the secondary (GNSS) antennas, network and status indicators, familiar 3GPP standard AT commands set, as well as the Quectel enhanced AT commands over the UART interface, USB connector for interfacing it with the software application from Quectel, are just some of the features available on the LTE IoT 2 click. A rich set of Internet protocols, industry-standard interfaces (UART, USB, SPI…) and driver support for all the major operating systems allow the Click board™ to be used in a wide range of M2M applications, such as smart metering in various industries (agriculture, gas distribution, water distribution), product tracking, and more.

LTE IoT 2 click is equipped with the BG96 LTE module from Quectel Wireless Solutions, which supports LTE CAT M1 and NB1 technologies, developed with IoT applications in mind. In addition, it supports EGPRS at 850/900/1800/1900 MHz, meaning that it can be used globally; it is not restricted to any region. The support for the CAT M1 and NB1 technologies and the ultra-low power consumption makes this module a perfect choice for the forthcoming 3GPP IoT technology.

BG96 LTE module is the main component of the click board and it consists of a number of internal blocks or sections, such as the RF section, NAND flash and DDR RAM section, Power Management section, and the cellular baseband processor with the peripheral interfaces. BG96 module supports several peripheral interfaces, including USB, UART, SIM card, I2C, SPI, I2S, and GPIO interfaces. Besides the main UART interface used for exchanging AT commands with the host MCU (UART 1), there are two more auxiliary UART interfaces, one of which is shared with the SPI interface (UART 3/SPI), while the other is used for debugging purposes (UART 2). All the additional UART/SPI interfaces are available on the Click board™ in a form of unpopulated headers, with the pads clearly labeled (RX, TX for the UART debug interface header, and CLK, SDI, SDO for the SPI interface header).

The debug UART interface (UART 2) operates at 115200bps and it is used for firmware debugging and logging the output. The UART 3 interface is multiplexed with the SPI interface and it is used to output NEMA and GNSS data sentences. It defaults to UART 3 when the module is used as the modem, but it can be also used as the SPI for the data transfer. These interfaces are not normally used, so the headers come unpopulated. If required, two standard pitch (2.54) headers can be easily soldered.

The Quectel BG96 module has to be powered by a clean and stable power supply. The voltage needed for the module to work properly is about 4V and it is derived from the 5V mikroBUS™ rail, through the MCP1826, a 1A low drop output (LDO) regulator from Microchip. Although the Quectel BG96 module is an ultra-low power device, the cellular network modules in general are notorious for their high-power consumption while actively exchange data, so 1A LDO had to be used.

Digital sections of the Quectel BG96 are supplied by 1.8V, so it is necessary to condition the incoming communication bus lines which connect the host MCU with the module. By utilizing its internal LDO regulator, the BG96 module provides the needed reference voltage for one side of the TXB0106, a 6bit bidirectional level shifter and voltage translator. The reference voltage for the other side of the TXB0106 level shifter is taken from the onboard SMD jumper, labeled as VCC SEL. This jumper is used to select between 3.3V and 5V from the mikroBUS™, depending on the used MCU type and its logic voltage level requirements.

The main UART bus of the Quectel BG96 module is connected to one side of the TXB0106 level shifter, while the other side is connected to the respective mikroBUS™ UART pins. However, the Quectel BG96 module is designed as the traditional DCE device (Data Communication Equipment) offering the full serial interface pin count, including the hardware flow control pins (CTS, RTS). These pins are routed to the mikroBUS™ CS (RTS) and the INT pin (CTS) and can be used in the MCU software if hardware flow control is needed. The RI pin is the ringing indicator, and it is routed to the mikroBUS™ PWM pin.

The STAT pin is used to signalize the status of the device. This pin is routed both to the mikroBUS™ AN pin through the level shifter, and the yellow LED labeled STAT, which is used to visually indicate the device status. The network status is indicated by the red LED labeled as TXD, located next to the STAT LED. The network status is indicated by the TXD LED, using the following pattern:

LTE IoT 2 click has a SMD jumper labeled as the BOOT, which is used to force the device to boot from the USB, which can be used during the firmware development or for the firmware update. During the normal operation, the USB BOOT mode is disabled.

This Click board™ is equipped with the micro USB connector. It allows the module to be powered and configured by a personal computer. Quectel Wireless Solutions Company offers a software suite and drivers for all major OSes, offering connectivity for a wide range of different configurations. The Micro SIM card holder on the back of the Click board™ is used to install a micro SIM card. This device cannot be used without a valid SIM card, which allows connection to the cellular network. Both 1.8V and 3V SIM card types are supported.

Two SMA antenna connectors are used for connecting the appropriate antennas: there is a main antenna SMA connector and the secondary (GNSS) antenna SMA connector. The main antenna is used to connect the module to the LTE base station.The secondary, global positioning (GNSS) antenna can be of both active or passive type, since the connector offers power supply from the internal LDO of the BG96 (1.8V). The module supports several global positioning technologies, including GPS, GLONASS, BeiDou/Compass, Galileo and QZSS. The GNSS interface is disabled by default and should be enabled by an AT command, if it is required.