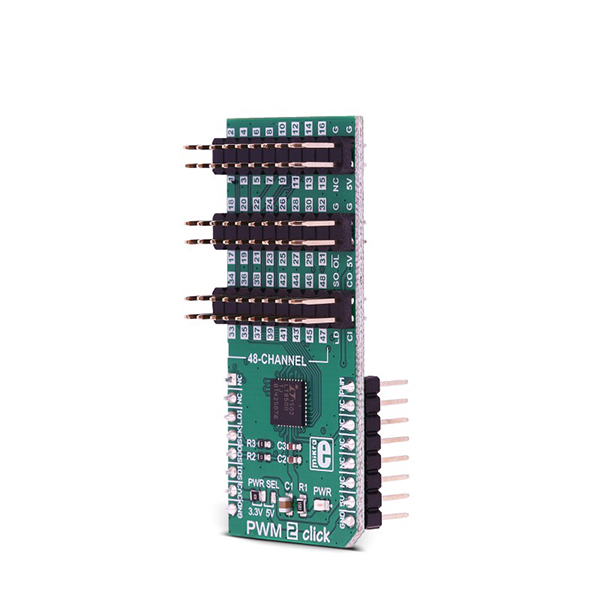 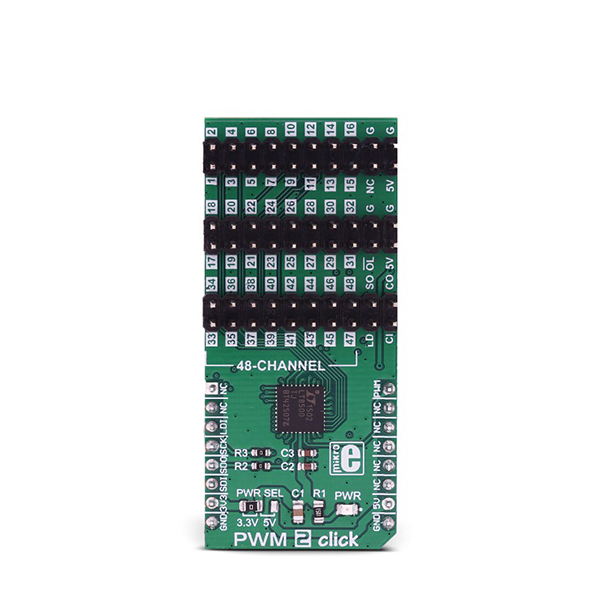 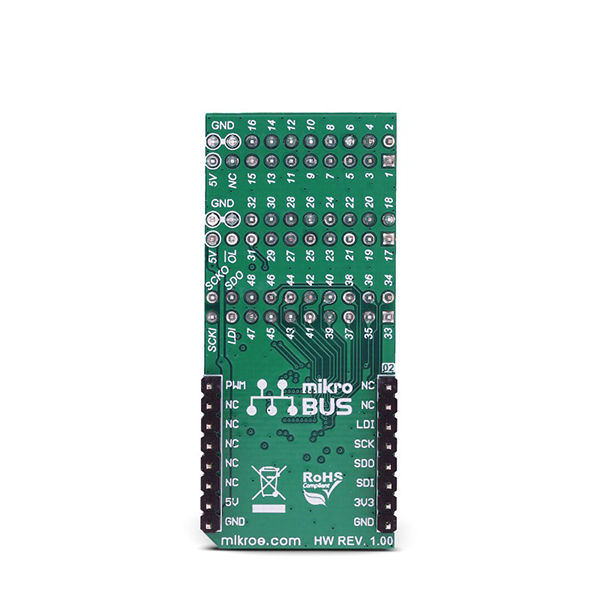 MIKROE PWM 2 Click offers 48 independently controlled PWM channels, available over the onboard headers, perfectly suited for driving LEDs. Each channel has a 12-bit PWM register associated to it, with the addition of the 6-bit correction register, also known as the dot correction register. PWM 2 is able to detect both synchronization errors and open LED errors, signaling the error via the dedicated pin and the status frame. The Click board™ fully supports cascading, exposing all the necessary pins on the onboard headers, so it can support a large array of LED elements.

The possibility to cascade more devices, as well as the ability to additionally fine-tune each PWM channel separately, compensating the brightness differences between the LED elements (dots), make PWM 2 click an ideal solution for building both small-scale and large-scale LED matrices and displays. Although it is targeted toward driving LEDs, the Click board™ can also be used for other purposes, such as the motor control, industrial control, robotics, and similar applications that can benefit from having compact 48 channel PWM driver.

The main component of the PWM 2 click is the LT8500, a 48-Channel LED PWM generator with 12-Bit resolution and 50MHz serial interface, from Analog Devices. This IC has 48 independent 12-bit PWM channels, each with 6-bit correction up to 50% of the original duty cycle. The LT8500 IC is clocked by a clock signal at the PWMCK pin. The frequency of the clock signal can go up to 25MHz, generating the PWM output frequency of up to 6.1kHz, which is sufficient for most purposes. The maximum speed of the LT8500 serial interface goes up to 50MHz in theory, but in practice, it will depend on many factors.

The clock signal at the PWM pin of the mikroBUS™ is triggering an internal counter register (PWMCK). This register is compared with the content of the PWMRSYNC register, associated with each channel. Whenever the counter value is less than the value written in a specific channel PWMRSYNC register, the PWM output of that channel goes to a HIGH logic level. The frequency of the output PWM signal is therefore determined by the frequency the clock signal at the PWMCK pin. This represents the basic operating principle of the LTC8500 IC. The PWMCK pin is routed to the PWM pin of the mikroBUS™.

Besides the usual SPI interface lines, the LT8500 PWM generator IC provides a serial interface clock output signal (SCKO), allowing additional devices to be connected in the parallel 5-wire topology (LDI, SCKI, SDI, SDO, and SCKO). This allows large-scale cascading, without the need for the skew balancing or buffering the signals. These additional pins are available at the standard 2.54 pitch headers on board. These additional pins on the header are described in a table, below. More information about cascading and using the SCKO feature of the IC can be found in the LT8500 datasheet.

The device is controlled by sending commands via the SPI interface, embedded in a command frame. There are eight different commands which are used to control the following parameters: PWM outputs update (synchronously or asynchronously to PWM period), the dot correction factor, self-test initialization, phase shifting between banks (groups of 16 channels), enabling/ disabling of the PWM output drivers, and enabling/disabling of the dot correction . A frame consists of a 12-bit data field for each of the 48 PWM channels, followed by an 8-bit command field, which contains one of the eight command codes. The status frame is clocked on the SDO pin, providing the host MCU with the frame information: LED fault status, phase shifting status, correction status, synchronization status, and so on. This information can be used either for troubleshooting or for other purposes by the host MCU application.

As already mentioned, additional functionalities of the LT8500 IC are offered via the onboard headers, along with the 48 PWM channel outputs. The outputs are not meant to drive devices with high current, so PWM 2 click is best used as the driver for additional circuitry, whether it is a simple MOSFET LED driver, or a more complex ICs, such as the LT3595A LED driver, for which a special input pin is reserved, allowing open LED conditions to be detected, even on the externally connected LT3595 IC. Onboard headers also offer fixed 5V output from the mikroBUS™ for the auxiliary purposes.

The Click board™ offers an operating voltage level selection between 3.3V and 5V by switching an SMD jumper labeled as the PWR SEL to an appropriate position. This allows both 3.3V and 5V MCUs to be interfaced with this Click board™.