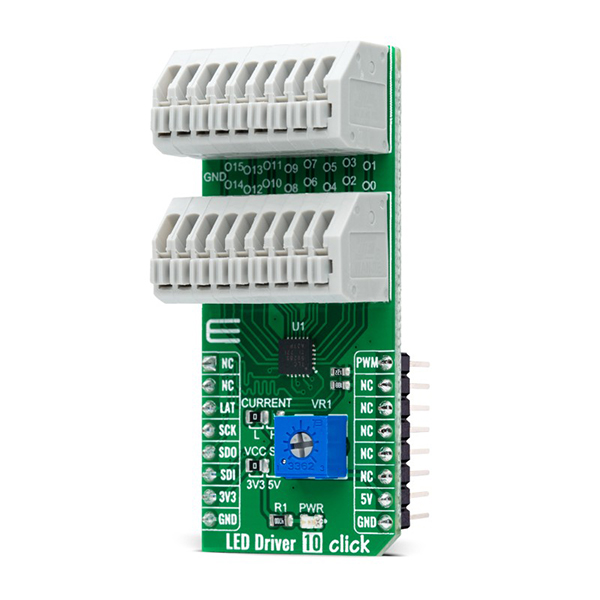 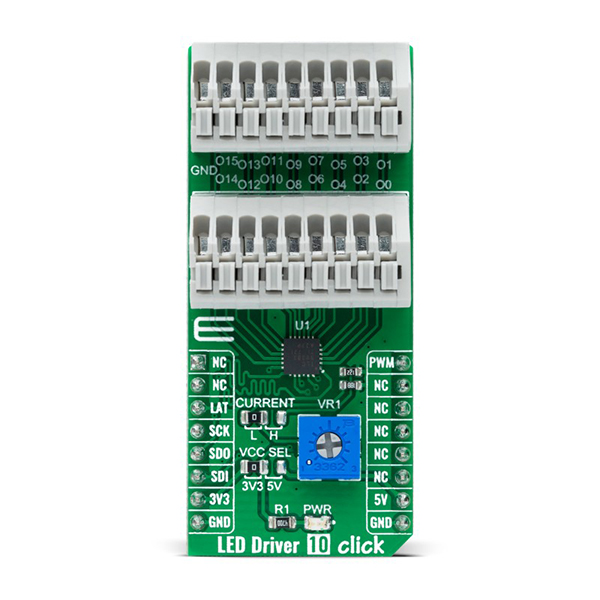 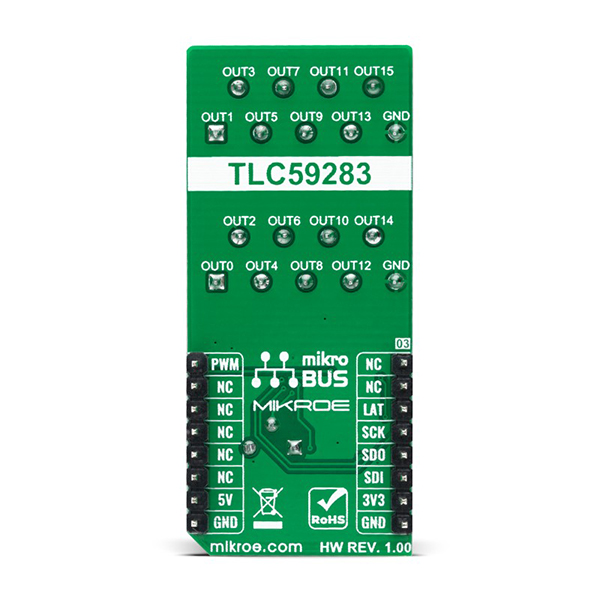 MIKROE LED Driver 10 Click is a compact add-on board that simplifies the control of multiple LEDs. This board features the TLC59283, a 16-channel, constant-current sink light-emitting diode (LED) driver with pre-charge FET from Texas Instruments. Each LED channel can be individually controlled with a simple SPI serial communication protocol compatible with both 3.3V or 5V logic levels. Each constant-current output has a pre-charge field-effect transistor that can reduce ghosting on the multiplexing drive LED display. It has additional features such as switching off all outputs via just one mikroBUS™ pin and setting the constant-current values on all 16 channels via one onboard potentiometer. This Click board™ is suitable for color mixing and backlight application for amusement products, LED status signalization, home automation projects, and many more.

LED Driver 10 Click as its foundation uses the TLC59283, an SPI bus controlled, 16-channel, constant-current sink light-emitting diode (LED) driver with pre-charge FET from Texas Instruments. It operates within a VCC supply voltage range where its outputs are 10V tolerant. Each LED output, 16 LED drivers presented on two nine position spring terminals, with a maximum output current of +50mA per channel, is programmable at OFF and ON state with a programmable individual LED brightness.

The internal pre-charge FET prevents the ghosting of multiplexed LED modules. One cause of this phenomenon is the parasitic capacitance charging current of the constant-current outputs and PCB wiring connected to LED pins of the TLC59283 through the external LED.

PWM pin of the mikroBUS™ socket should be set to a high logic state when powered on because the constant-current may be turned on due to random data in the output ON/OFF data latch. When the PWM pin is in a low logic state, the corresponding LED output is turned ON if data in the ON/OFF control data-latch are '1' and remains off if the data are '0'. When the PWM pin is high, all LED outputs are forced OFF.

This Click board™ can operate with both 3.3V and 5V logic voltage levels selected via the VCC SEL jumper. This way, it is allowed for both 3.3V and 5V capable MCUs to use the SPI communication lines properly. However, the Click board™ comes equipped with a library containing easy-to-use functions and an example code that can be used, as a reference, for further development.