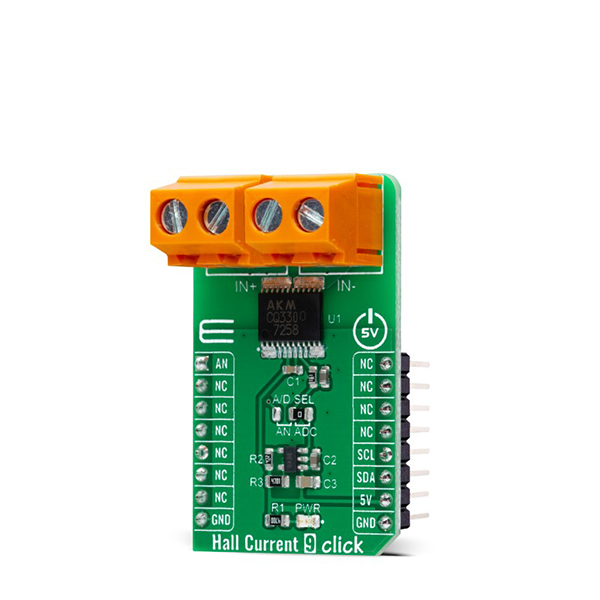 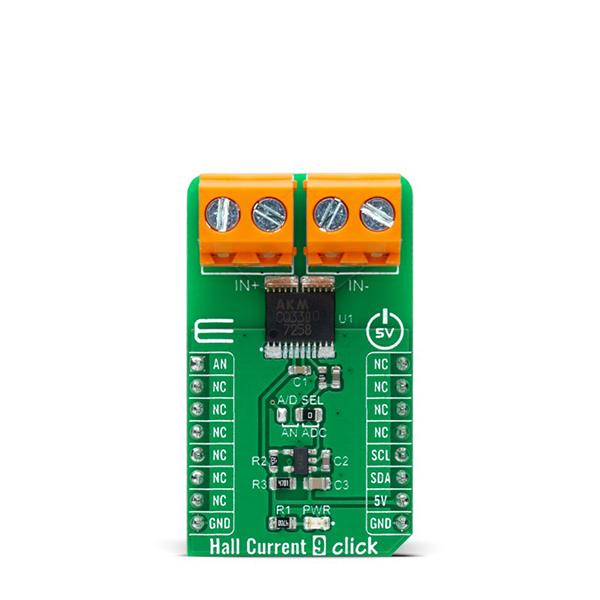 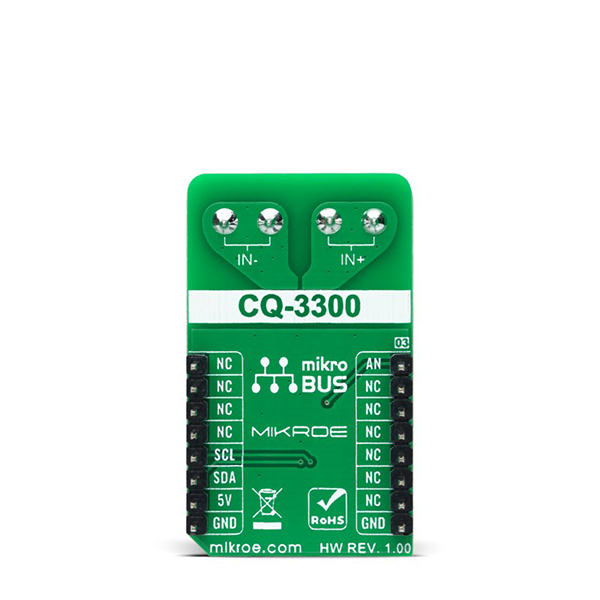 Hall Current 9 Click is a compact add-on board that provides a fast and precise solution for AC / DC current sensing. This board features the CQ3300, a high-speed response coreless current sensor using a Hall sensor that outputs the analog voltage proportional to the AC/DC from AKM Semiconductor. It employs a high sensitive InAs (Indium Arsenide) Hall element with the ability to detect both DC and AC with high accuracy and high speed. It has an ultra-fast high response of 0.5μsec, high galvanic isolation, and it is designed for the currents to range from -6.4A to +6.4A. This Click board™ is suitable for overcurrent applications and shows good performance in small-sized inverter applications.

DO NOT TOUCH THE BOARD WHILE THE EXTERNAL POWER SUPPLY IS ON!

Note: The Click board™ is to be used by trained personnel only, while applying high voltages. A special care should be taken when working with hazardous voltage levels.

Hall Current 9 Click is based on the CQ3300, a high-speed response coreless current sensor using a Hall sensor that outputs the analog voltage proportional to the AC/DC from AKM Semiconductor. This current sensor has a small-size and high galvanic isolation, specially designed for the currents range from -6.4A to +6.4A. Quantum well ultra-thin film of Indium Arsenide is used as the Hall sensor, which enables the high-accuracy and high-speed current sensing showing good performance in small-sized inverter application. It has primary conductor resistance that reduces the heat generated by current significantly compared to a shunt resistor allowing a continuous current flow of 20Arms and has an ultra-fast high response of 0.5μs, making it also suitable for overcurrent applications.

The internal structure of the CQ3300 consists of several blocks such as primary conductor, Hall sensor, amplifier, buffer, compensation block, bias, and EEPROM unit. The primary conductor measure applied current, while the Hall element detects magnetic flux density generated from the measured current. Hall element’s output is then amplified, with a compensation circuit that adjusts the temperature drifts of sensitivity and zero-current output voltage. The last block is the output buffer with gain that outputs the voltage proportional to the current applied to the primary conductor.

The CQ3300 has a ratiometric output that means it changes proportionally to the supply voltage. It is suitable for applications where the analog output is converted to digital using an A/D converter and where fluctuation of the power supply voltage causes reference error of the A/D converter. Just like that, the output voltage can be converted to a digital value using MCP3221, a successive approximation A/D converter with a 12-bit resolution from Microchip, using a 2-wire I2C compatible interface, or can be sent directly to an analog pin of the mikroBUS™ socket labeled as AN. Selection can be performed by onboard SMD jumper labeled as A/D SEL to an appropriate position marked as AN and ADC.

The MCP3221 provides one single-ended input with very low-power consumption, a low maximum conversion current, and a Standby current of 250 μA and 1 μA, respectively. Data can be transferred at rates of up to 100 kbit/s in the Standard and up to 400 kbit/s in the Fast Mode. Also, maximum sample rates of 22.3 kSPS with the MCP3221 are possible in a Continuous-Conversion Mode with a clock rate of 400 kHz.