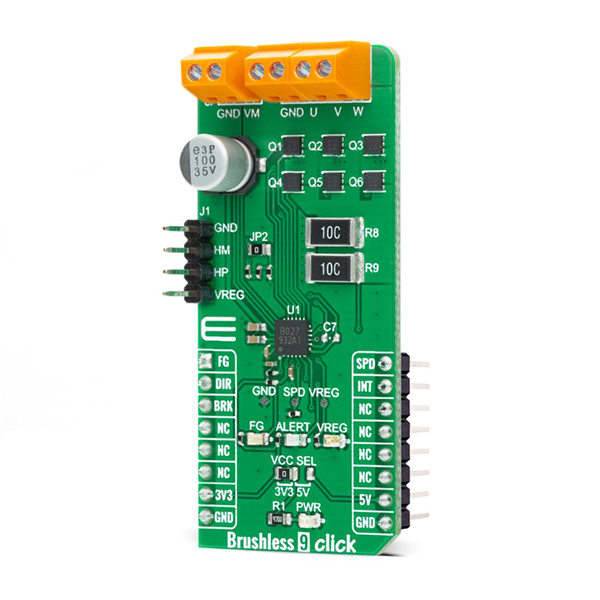 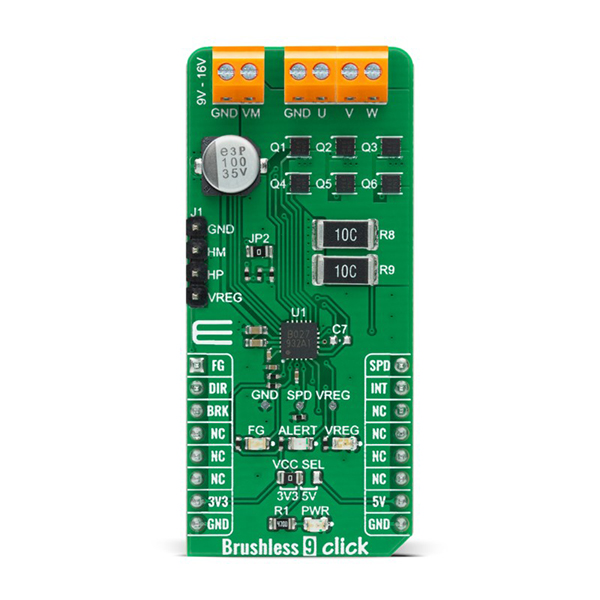 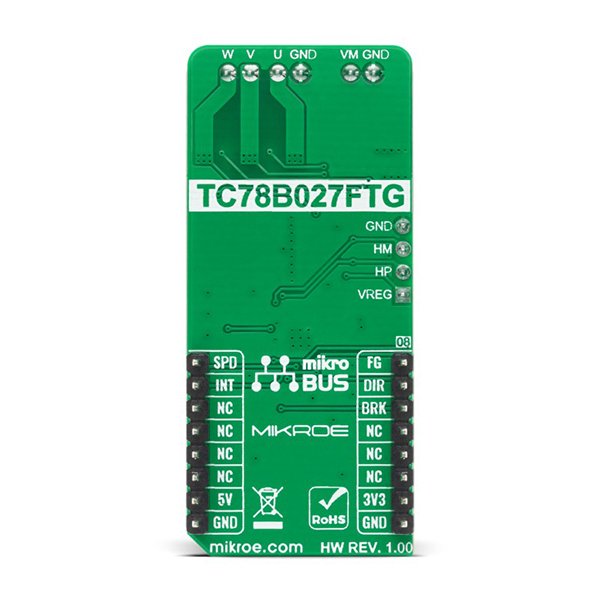 Brushless 9 Click is a compact add-on board suitable for controlling BLDC motors with any MCU. This board features the TC78B027FTG, a 1-Hall sine-wave PWM controller for three-phase brushless DC motors from Toshiba Semiconductor. It simplifies the motor selection by using only one Hall sensor input that can be used with either a single Hall sensor motor or the more conventional 3 Hall sensor motors. Besides, it offers energy-saving and quiet motor operation, alongside incorporated non-volatile memory and a closed-loop speed control function. This Click board™ provides optimum operating efficiency in applications such as high-velocity server fans, blowers, and pumps.

Brushless 9 Click is supported by a mikroSDK compliant library, which includes functions that simplify software development.

Brushless 9 Click is based on the TC78B027FTG, a 1-Hall sine-wave PWM controller for three-phase brushless DC motors from Toshiba Semiconductor. The TC78B027FTG simplifies the motor selection by using only one Hall sensor input that can be used with either a single Hall sensor motor or the more conventional 3 Hall sensor motors. It can be operated by 1-Hall sine-wave commutation and 1-Hall 150° commutation, which can be switched by register configuration. Also, a closed-loop speed control function is implemented without using an external MCU. The closed-loop control function regulates motor rotational speed fluctuations caused by changes in power supply voltage and load. The TC78B027FTG also has some protection features such as thermal shutdown, overvoltage and overcurrent protection, lock detection, and many more.

For Normal operation, it is necessary to apply the voltage in the range from 9V to 16V to the external connector labeled as VM and to connect Hall signals from the BLDC motor through the J1 header on the left side of the board. The operation moves to the Standby mode when a zero cross of the Hall signal is not detected for a lock detection period after the voltage of 1V or less is applied to the SPD pin. In the Standby mode, the power consumption is reduced by powering off its internal 5V regulator. The TC78B027FTG also drives six external N-CH MOSFETs, the SSM6K513NU from Toshiba Semiconductor, that run the connected Brushless DC Motor.

If any of the previously mentioned critical conditions (such as over current, over temperature, motor lock) occur, the TC78B027FTG will signal such a phenomenon using an LED diode labeled as ALERT connected to the interrupt pin marked as INT on the mikroBUS™ socket. Besides, it is possible to detect the occurrence of motor lock events where the indication of such a condition is performed using the LED indicator labeled as FG routed on the AN pin of the mikroBUS™ socket.

NOTE: Pins such as FG, SPD, and INT can also be used as serial interface pins, where FG can be used for SDI or SIO signal, SPD for SCK signal, while INT can be used as SDO signal in case of 3-wire SPI communication. In case the SDO line is not used, INT retains its ALERT function.

This Click board™ is designed to be operated with both 3.3V and 5V logic voltage levels that can be selected via VCC SEL jumper. This allows for both 3.3V and 5V capable MCUs to use communication lines properly.