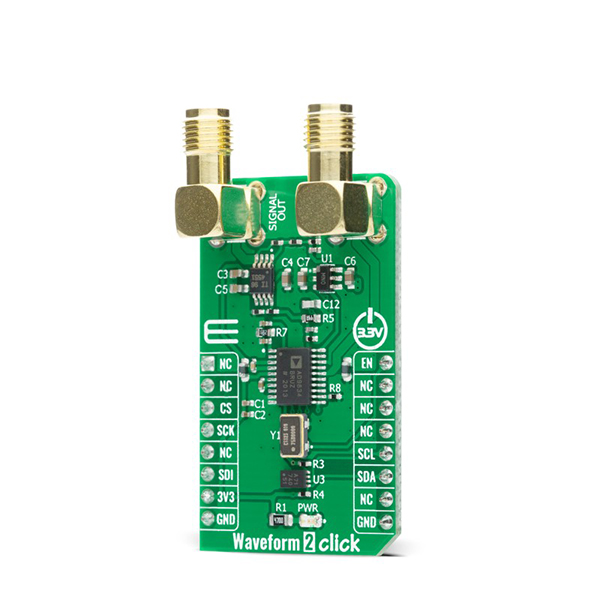 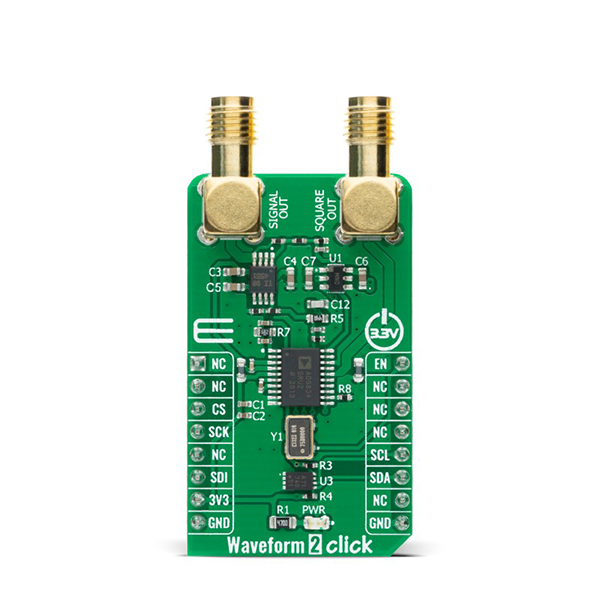 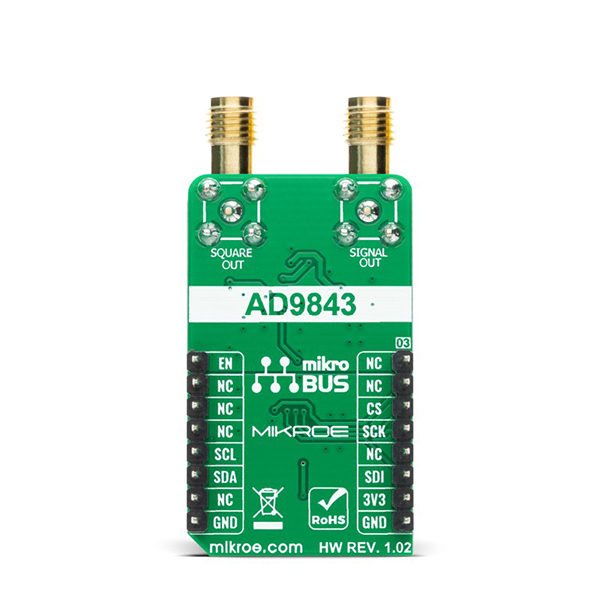 Waveform 2 Click is a compact add-on board that contains a direct digital synthesis device for waveform generator applications. This board features the AD9834, a 75 MHz low power DDS device capable of producing high-performance sine/triangle/square outputs from Analog Devices. It provides the capability for phase and frequency modulation and has an on-board comparator that allows the production of a square wave signal for clock generation. With a 75 MHz clock rate resolution of 0.28Hz can be achieved, while similarly, with a 1 MHz clock rate an AD9834 can be tuned to 0.004Hz resolution. This Click board™ represents an ideal candidate for power-sensitive applications, frequency stimulus/waveform generation, frequency phase tuning and modulation, and many more.

Waveform 2 Click is supported by a mikroSDK compliant library, which includes functions that simplify software development.

Waveform 2 Click is based on the AD9834, a 75 MHz low power DDS device capable of producing high-performance sine/triangle/square outputs from Analog Devices. The AD9834 is capable of a broad range of simple and complex modulation schemes. These modulation schemes are fully implemented in the digital domain, allowing the accurate realization of complex modulation algorithms using DSP techniques. It contains a 16-bit control register accessible through the SPI serial interface that sets up the AD9834 as the user wants to operate it. The internal circuitry of the AD9834 consists of a numerically controlled oscillator (NCO), frequency and phase modulators, SIN ROM, a DAC, a comparator, and a regulator.

In addition to the positive supply voltage requirement, the THS4551 amplifier also has a negative supply voltage, which is achieved by the ADM8829, a charge-pump voltage inverter used to generate a negative supply from a positive input from Analog Devices. This Click board™ also has an external oscillator of 75 MHz, which can be enabled by the EN pin of the mikroBUS™ socket, and represents the maximum frequency that can be accepted by the AD9834. The 75MHz clock produces the cleanest possible Sine waveform at high frequencies while on the other creates errors at low frequencies. In addition to these features, the Waveform 2 Click also has an EEPROM memory IC the 24AA64, an i2C configurable 64K serial EEPROM from Microchip that can be used for various storage applications.

The Waveform 2 Click communicates with MCU using the 3-Wire SPI serial interface that is compatible with standard SPI, QSPI™, MICROWIRE™ and operates at clock rates up to 40 MHz. Besides. It possesses additional functionality such as reset function, necessary during AD9834 initialization, implemented and routed at the RST pin of the mikroBUS™ socket.