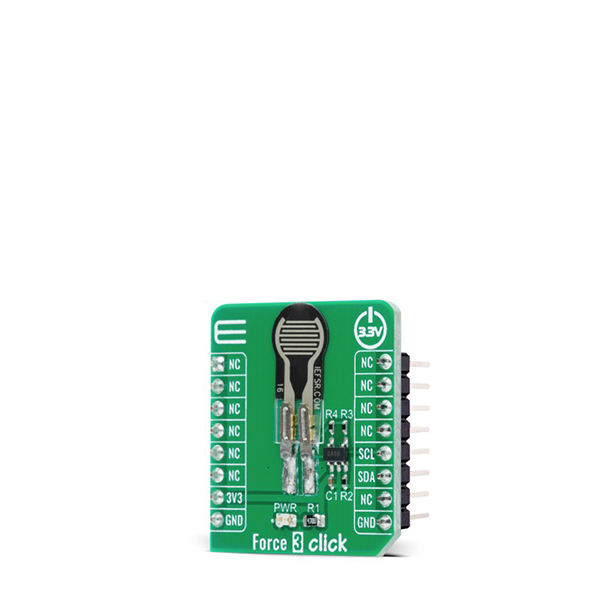 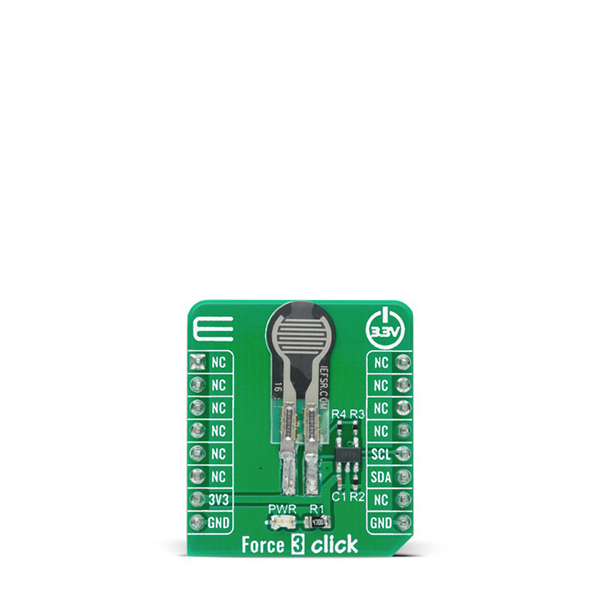 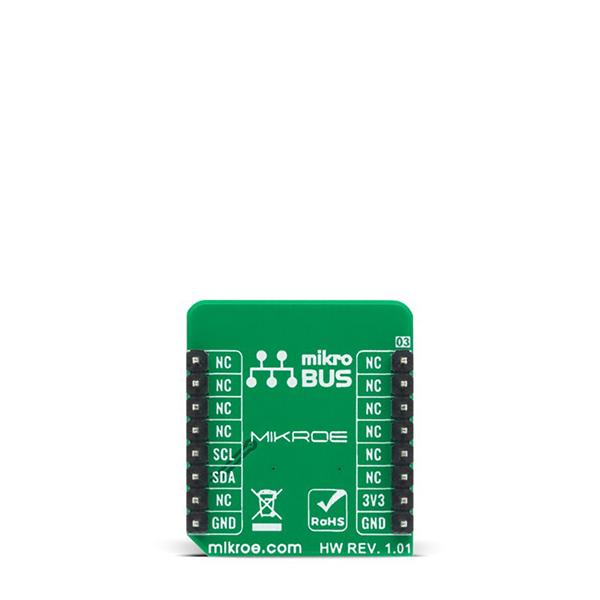 Force 3 Click is a compact add-on board with circuitry for implementing Force Sensing Resistor into your projects whose resistance changes when a force, pressure, or mechanical stress is applied. This board features FSR 400 series 34-00004 single zone Force Sensing Resistor from Interlink Electronics, a robust polymer thick film (PTF) device that exhibits a decrease in resistance with an increase in force applied to the surface of the sensor. Simple and easy to integrate, ultra-thin, and cost-effective, Force 3 Click has an actuation force as low as 0.2N and sensitivity range up to 20N. It also provides 2-Wire I2C compatible control interface using an MCP3221, low-power 12-bit resolution A/D converter. This Click board™ is optimized for use in human-machine interface devices including automotive electronics, medical systems, industrial controls and robotics.

Force 3 Click is supported by a mikroSDK compliant library, which includes functions that simplify software development.

Force 3 Click is based on the FSR 400 series 34-00004 single zone Force Sensing Resistor IC from Interlink Electronics. Force-sensing resistors consist of a conductive polymer, which predictably changes resistance following the application of force to its surface. As the force on the sensor is increased, the resistance is decreased. This thin sensor is made of two membranes that are separated by a spacer around the edges. The top layer of the sensor consists of the area of the force-sensitive layer on the flexible film, while the bottom layer is comprised of conductive circuit traces on the flexible film. When pressed, the gap between the two membranes gets closed. This shorts the two membranes together, with a resistance that is proportional to an applied force.

Force 3 Click also contains all the necessary circuitry, required to obtain precise measurements from the sensor. It communicates with the MCU using the MCP3221, low-power 12-bit resolution A/D converter with an I2C interface. Data on the I2C-bus can be transferred at rates of up to 100 kbit/s in the Standard-mode and up to 400 kbit/s in the Fast-mode. Maximum sample rates of 22.3 kSPS are possible with the MCP3221 in a continuous-conversion mode and SCL clock rate of 400 kHz.

The sensor is placed in a voltage divider configuration with a fixed resistor R2 (10k). The output voltage is measured across resistor R2 and then sent to the analog pin of the A/D converter MCP3221. Output voltage value was calculated using the voltage divider formula, whose value is later used in the Test Example to accurately determine the strength of the applied force. The Test Example is made in such a way that, based on the value of the applied force, it is possible to obtain four output values such as Light Touch, Weak Squeeze, Medium Squeeze, and Strong Squeeze.

This Click board™ uses the I2C communication interface. It is designed to be operated only with 3.3V logic levels. A proper logic voltage level conversion should be performed before the Click board™ is used with MCUs with logic levels of 5V. More information about the 34-00004 Force Sensing Resistor can be found in the attached datasheet. However, the Click board™ comes equipped with a library that contains easy to use functions and a usage example that may be used as a reference for the development.