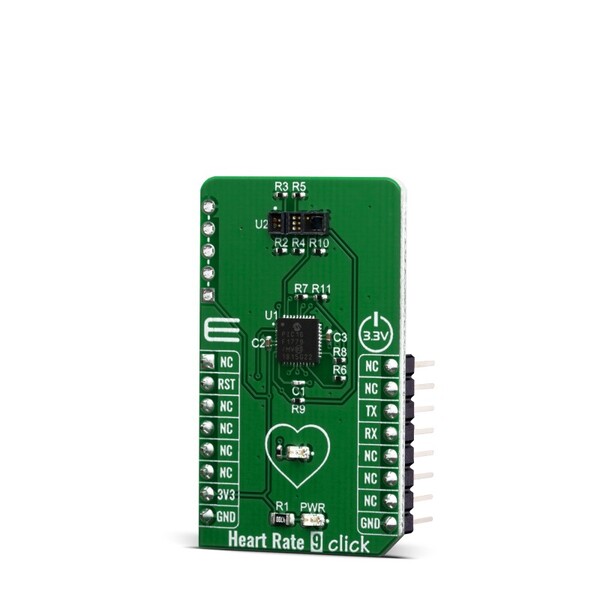 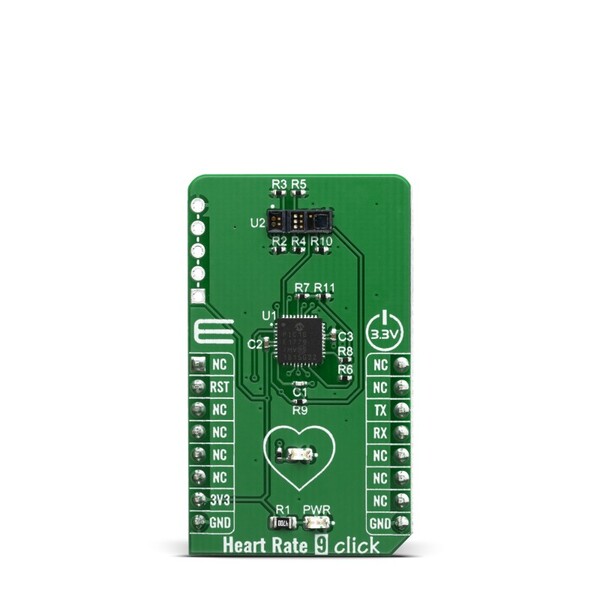 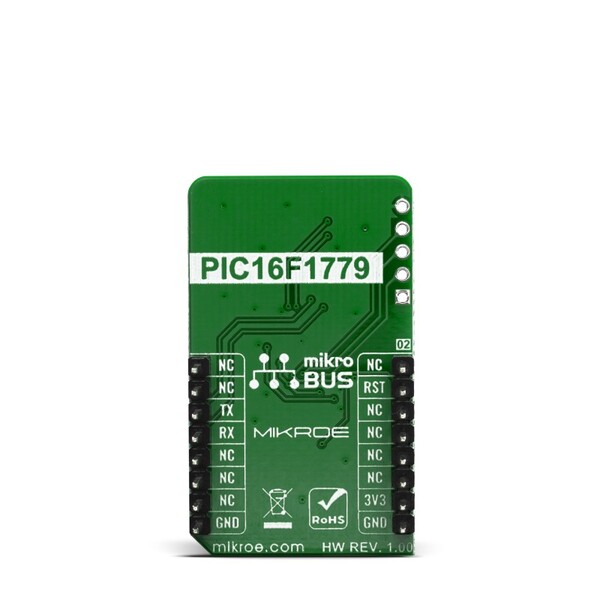 The Heart Rate 9 Click is a Click board™ which features PIC16F1779 8-bit MCU and SFH 7060 heart rate and pulse oximetry monitoring sensor. This Click has an algorithm for processing data from the sensor and it can send data for 3 different diodes (green, ir, red) who give out a diagram of the heartbeat and its frequency per minute. The data has shown that the most notable signal comes from the green diode because it has the best reflection through the surface of the skin due to its shortest wavelength among three light sources. Implementing a light barrier to block optical crosstalk and improved geometry for optimized signal quality. Most reflective heart rate monitors still have significant noise in their designs despite the use of complex and expensive analog circuits such as Analog Front End (AFE) chips. A more cost-effective method for reducing noise and taking these measurements is necessary.

The Heart Rate 9 Click is supported by a mikroSDK compliant library, which includes functions that simplify software development.

While the blood passes through the capillary blood vessels, they expand and dilate. Their light reflectance index changes accordingly. This is the basis of the photo-plethysmogram (PPM), a method used for the volumetric measurement of an organ, or in this case - blood vessels. The heart rate signal is calculated according to the changes of the reflected green light, sensed by the PD element. The Heart Rate 6 Click can provide the HRM readings by simply placing the index finger over the optical sensor.

The challenge in a multiple signal sources system (for example, the LEDs in the case of a pulse oximeter) is that each LED must share the same photodiode. A classic solution is to turn on each light source in sequence and then take each measurement in turn. Each light source gets its own slice of time in which the photodiode can get its measurement. This method is called Time-Division Multiplexing (TDM). The same principle is also applied to the TDMA-based cellular system. The drawback of the TDM approach is that adding more light sources, while keeping the data processing routine the same, results in more time to get a measurement from every source.

Microchip’s proprietary method uses a known concept called Maximal Length (ML) sequence, a type of pseudorandom binary sequence, to generate a gold code or a reference sequence. This reference sequence is then phase shifted using PhaseDivision Multiplexing (PDM) to drive multiple LEDs. The light amplitudes from these LEDs, after passing through a part of a body, are detected by a phototransistor or photodiode and digitized with an Analog-to-Digital Converter (ADC). The digitized ADC light amplitude values are re-correlated with each LED’s driving sequence. Spread spectrum techniques are known for their noise mitigation properties and ability to pass multiple signals through the same medium without interference. Thus, these measurements of each light absorption of the body can be performed substantially simultaneously with minimal interference from each other.

The SFH7060 made by OSRAM integrates three green, one red, one infrared emitter and one photodiode that are all placed in a reflective type of package. The reflective photosensing method has become increasingly popular in developing small, wearable biometric sensors, such as those green light sensors seen in the back of smart watches or activity tracker wristbands.