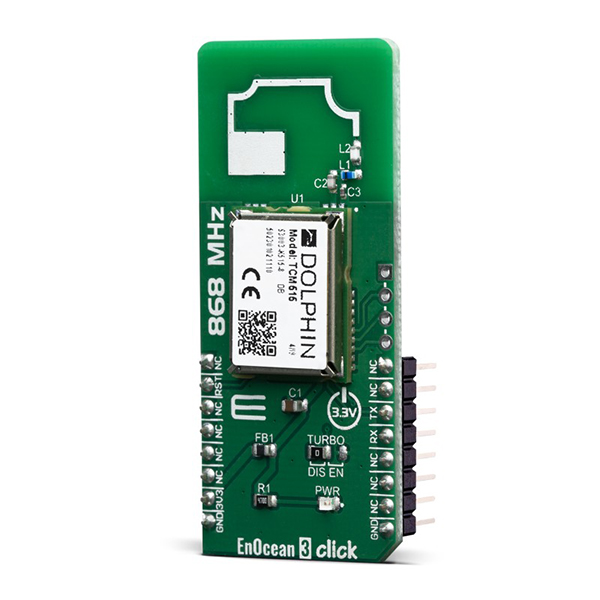 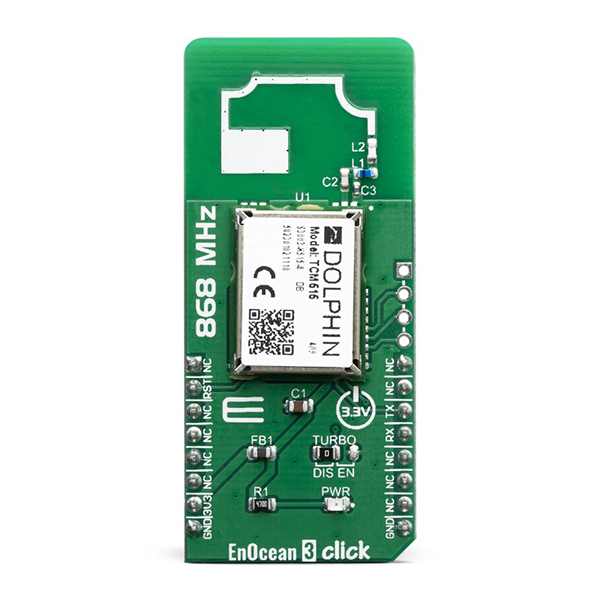 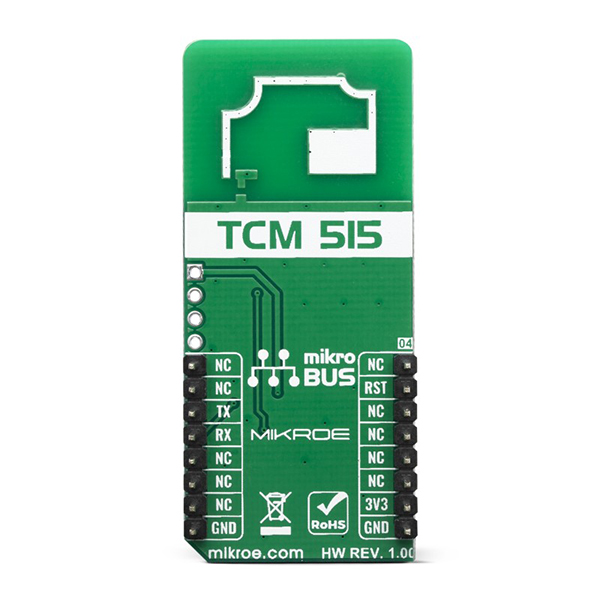 EnOcean 3 Click carries an ultra-low power TCM515 transceiver gateway module which operates at 868MHz radio band, perfectly suited for the realization of transceiver gateways, actuators and controllers for systems communicating based on the EnOcean radio standard. For communication to other devices we have implemented PCB antenna on the board making this Click ready to use device which can filter, decrypt and authenticate traffic before forwarding it to the processor or PC over UART.

EnOcean 3 Click is supported by a mikroSDK compliant library, which includes functions that simplify software development.

Note: EnOcean 3 Click is intended and certified to be used in Europe region.

EnOcean 3 Click features TCM515 module, a low-powered wireless module which is intended for use together with EnOcean’s range of energy harvesting modules. This module is also optimized for application requiring the smallest possible size and integrated security handling such as line-powered actuators or controllers.

The EnOcean 3 Click uses TCM515 module from the company EnOcean, which operates on 868MHz ASK EnOcean Radio Protocol. It’s fully integrated radio capability enables communications with other devices by using onboard PCB antenna, so no additional antennas are needed for testing this device.

Each TMC515 module contains its own EnOcean Unique Radio ID (EURID) which can be used during transmission for data authentication. Besides this feature, it's also possible setting for each module Base ID or Broadcast ID depending on the application that you are designing.

Another important feature is SLF (Security Level Format) which specifies the parameters of the encryption, authentication and rolling code algorithms used for communication with a specific device, which enables TCM515 to encrypt and decrypt telegrams using AES128 based on a 16-byte security key.

The TCM 515 provides a transparent radio link between EnOcean radio devices and an external host connected via UART interface using the standardized EnOcean Serial Protocol V3 (ESP3) communication protocol. The default interface speed for this module of the ESP3 (UART) interface is 57600. Additionally, it is possible to change the default ESP3 interface speed at power up from 57600 Bit per second to 460800 Bit per second by moving TURBO jumper to EN position.

This Click board™ is designed to be operated only with 3.3V logic level. A proper logic voltage level conversion should be performed before the Click board™ is used with MCUs with logic levels of 5V. It is ready to be used as soon as it is inserted into a mikroBUS™ socket of the development system.

EnOcean technology is based on the energetically efficient exploitation of slight mechanical motion and other potentials from the environment, such as indoor light and temperature differences, using the principles of energy harvesting. EnOcean-based products (such as sensors and light switches) perform without batteries and are engineered to operate maintenance-free. The radio signals from these sensors and switches can be transmitted wirelessly over a distance of up to 300 meters in the open and up to 30 meters inside buildings.

The ESP3 is a Point-to-Point protocol with a packet data structure. The maximum size of transferred data is 65535 bytes, with the packet being only 14 bytes long and are transmitted at 125 kbit/s. Compared with ESP2.0, that has a maximum of 25 bytes, it’s a considerable improvement.