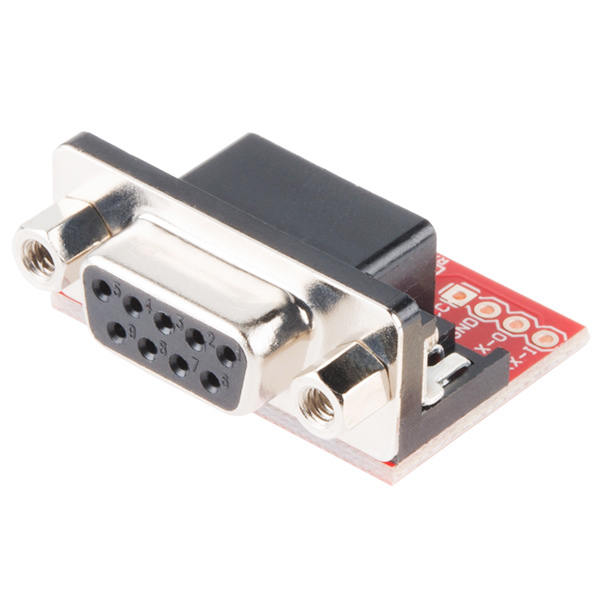 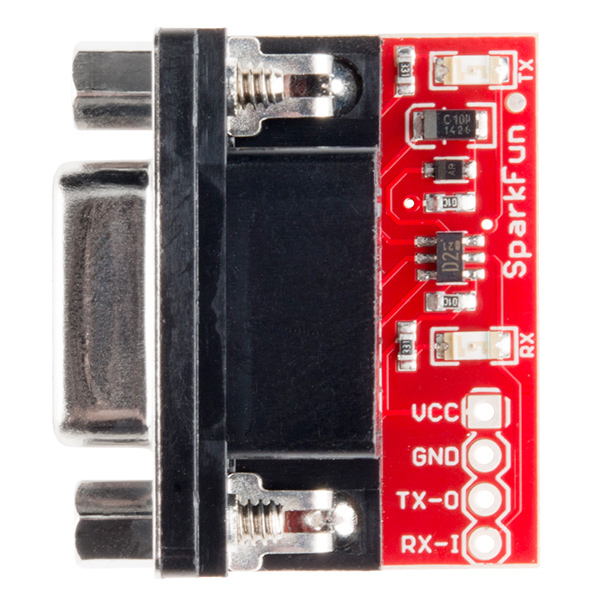 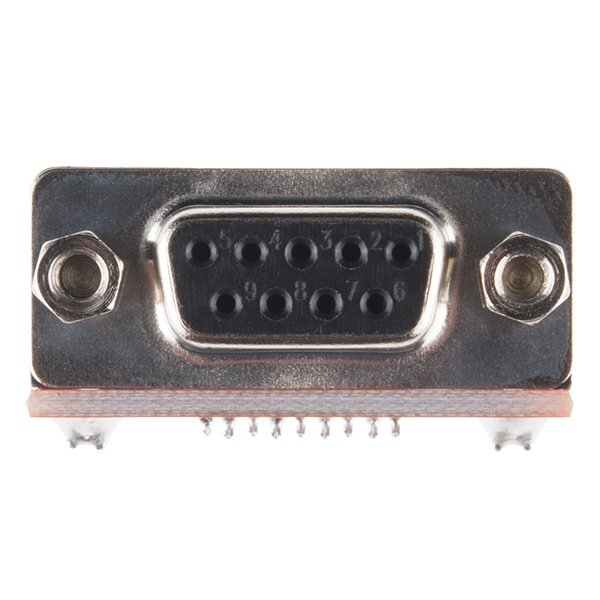 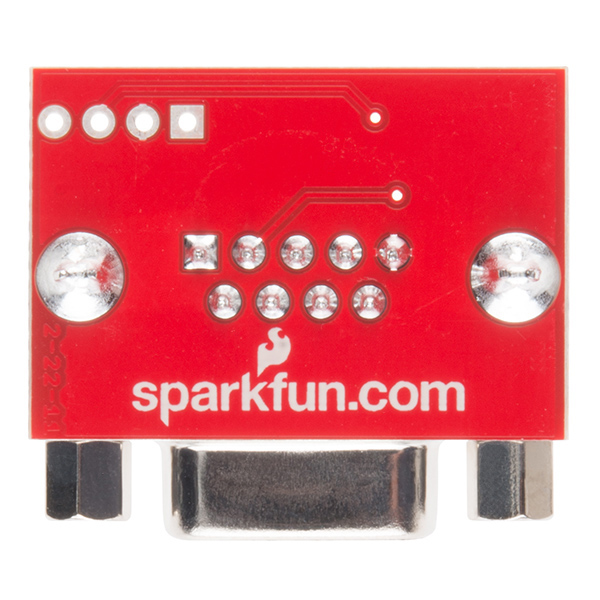 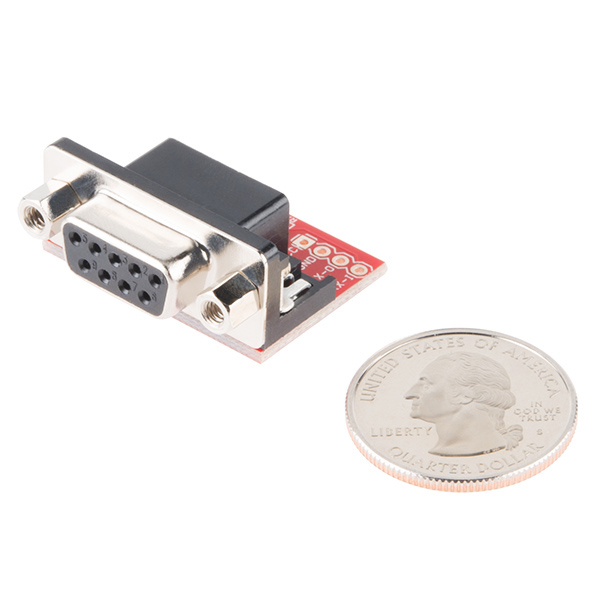 The smallest and easiest to use serial conversion circuit on the market! This board has one purpose in life - to convert RS232 to TTL and vice versa (TX and RX). This will allow a microcontroller to communicate with a computer. Shifter SMD is powered from the target application and can run at any voltage! That's right - power the board at 5V and the unit will convert RS232 to 5V TTL. Power the board at 2.8V and the Shifter board will convert RS232 to 2.8V CMOS TTL. Includes two indicator LEDs for TX and RX. Runs from 300bps up to 115200bps.

Unit comes fully assembled and tested as shown. You can either solder a 4-pin header or individual wires.

For an example of how to use with external power, try looking at this image.

For more information about RS232 and TTL serial, try looking at our tutorial here => [ https://www.sparkfun.com/tutorials/215 ].

We tried converting RS232 voltage down to 1.8V but it was not able to work. The lowest seemed to be around 2.1V with the RS232 Shifter. We recommend using the RS232 Shifter running at 5V (or anything higher than 2.8V) for the TTL side and further convert the signal down to 1.8V with the TXB0104 [ https://www.sparkfun.com/products/11771 ]. The TXB0104 can translate down to 1.2V. Make sure that you have 5V and 1.8V to set the logic levels with each respective TTL side.

Know what you're doing, or else purchase a MAX232 based converter

about 7 years ago by Member #820631 verified purchaser

I was not able to get this converter to work in my application. Judging from the comments, many others were not able to either. I would suggest using a MAX232 based chip instead. This seems to shift the RS-232 15V logic down to 5V TTL, but I do not believe it shifts 5V TTL up to 15V logic. The MAX232 based boards will do this.

If you know more than me, go ahead and give it a shot. Otherwise, the MAX232 based boards work right out of the box. I believe the RS-232 shield available from SparkFun is such board, but there are cheaper, smaller converters available elsewhere.

about 8 years ago by Member #587757 verified purchaser

Works well. Too well, my co-workers are now using.

about 6 years ago by klinkenbecker verified purchaser

Nothing I can find indicates what U2 is and who makes it??

about 8 years ago by Member #147169 verified purchaser

Works great if you need your arduino to control a serial device.

Handy device, does what needed. Won't take much space from ''toolbox''.

about 8 years ago by Member #653232 verified purchaser

Hooked this up direct to the UART and 3.3v pins on Raspberry Pi GPIO and it just worked fine. Depending on the serial cable/device you're connecting it to, you might have to swap over the TX and RX connections, per other comments. It doesn't harm anything if you get them the wrong way round - just doesn't work.

about 4 years ago by Member #386928 verified purchaser

Using device with older RS232 terminal server to interface to serial console of Raspberrry Pi devices. Works as described with Vcc of 3.3 supplied by by Pi. Small receive led is helpful for gross level trouble shooting i.e. null/tx/rx swapping and such.

Works great, but no RTS/CTS lines

about 4 years ago by Member #320025 verified purchaser

This works great for my pen-plotter project (https://github.com/hughpyle/penplot1.local), using a Teensy 2.0 to provide a USB serial interface, and this shifter for the RS-232 connection.

The only downside is: it doesn't break out the hardware flow control connections for RTS/CTS, so I needed to implement Xon/Xoff flow control in software.

I bought this on the recommendation of a vendor for a work-related project. The price make it very tempting. Didn't realize that it has no built-in boost converter. It steals -12 V from the incoming data line and passes the Vcc of the UART side through as +12 V. This in my application was only 3.3 V and did not work. I almost missed a deadline and put my job at risk. At the last minute I used a lab power supply to boost the voltage to 3.5 V and made it work. This sort of shortcut should be disclosed in the advertising. The missing connector was at least obvious from the picture and not a surprise. The rest of it functioned as claimed.

about 2 months ago by Member #99570 verified purchaser

The product worked as described. Same day shipment. Comes in the nifty Sparkfun red box! Sparkfun sets the bar for quality! I ended up using the MAX3232 breakout board because I like the charge-pump technique. Both worked great!

about 6 years ago by Member #818966 verified purchaser

I have a 2.7V system that has Tx/Rx exposed. Plugging this little guy got me talking between my Linux box and device in no time!

about 6 years ago by Member #873312 verified purchaser

Just a transistor based voltage reducer. Not as good as a MAX 232 based product for two way communication. Recommend internet search engine for better device.

It's the Bruce Frikin' Lee of RS232 Transcievers

about 5 years ago by Member #556063 verified purchaser

If Old-Fat-Jiu-Jitsu-Wielding Elvis were an RS232 transceiver, this would be his embodiment. Transmitting from microprocessor to RS232 is as easy as a hip throw forward crane kick. Receiving and subduing those threatening +/-15v incoming RS232 dragons is accomplished via a reverse cross strangle. LED indicators are as welcoming as a rising sun, not seen on other boards. -The Current Source

about 5 years ago by omglolbah verified purchaser

Works as advertised. What I did not consider when ordering was how to get this thing fixed to my baseplate with no screw holes... Doh!

about 4 years ago by Member #495156 verified purchaser

This works well with micro-controllers operating from batteries. You can find similar circuits dating back to the 80's, but why bother? Here it is in a small form factor and very convenient to use. This is the best implementation of it I've seen anywhere.