This tutorial is intended to show the reader how to build up an Ardubot platform. There are a few different ways that it can be done, so we?re going to be a little general and show a couple examples.

First, gather all the parts: 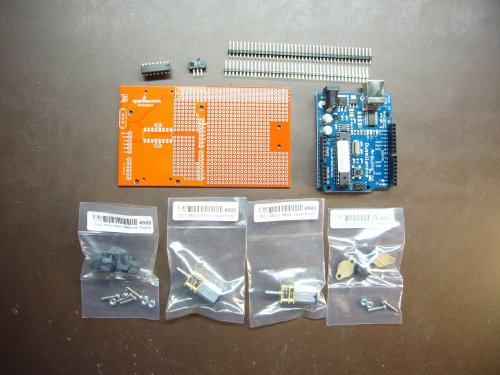 Most of the guts of the Ardubot. 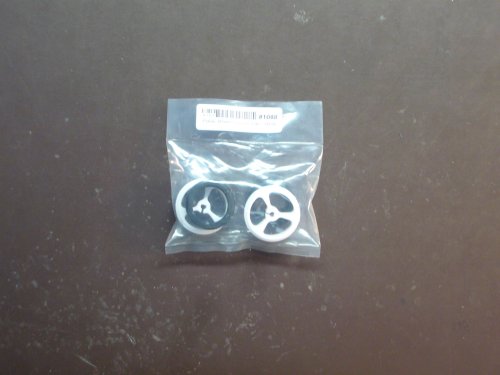 You could also use the polarized battery connector we sell (sku: PRT-08233). I could also have substituted the 5V, standard sized Arduino Pro board (sku: DEV-08943) for the USB version, making it slightly cheaper and smaller. And I could have used 100:1 motors (sku: ROB-08910) instead of 30:1, making it slower. These were just my choices. Your mileage may vary. 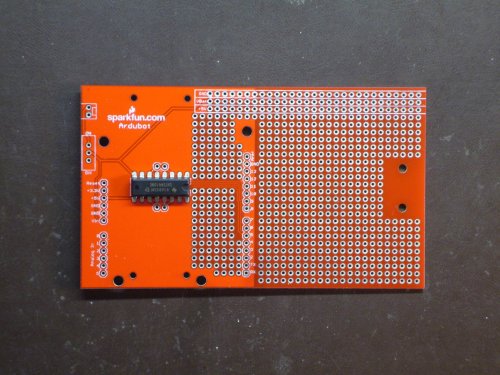 The bridge driver soldered onto the Ardubot.

Next, install the motors with their mounts. The mount kit comes 2 mounts and hardware per package. The mount fits over the gearbox on the motor with a good fit. Just insert the nuts into the mount holes and bolt it all together from the other side of the board. 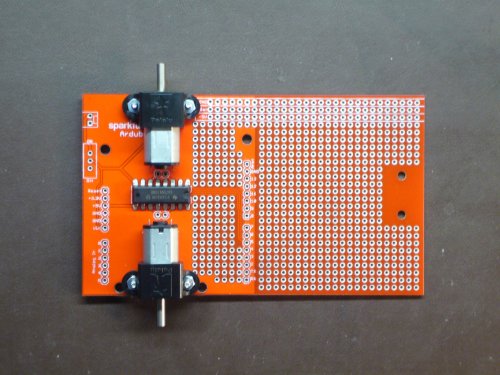 What the motors look like once they are mounted on the board.

Wheels next. You?ll have to put the rubber on the rims yourself. That?s just part of this whole DIY craze thing that?s going around. Oh, and you might want to trim the flashing off of the rims first as it makes for a better fit. The wheels are just pressed onto the motor shafts. 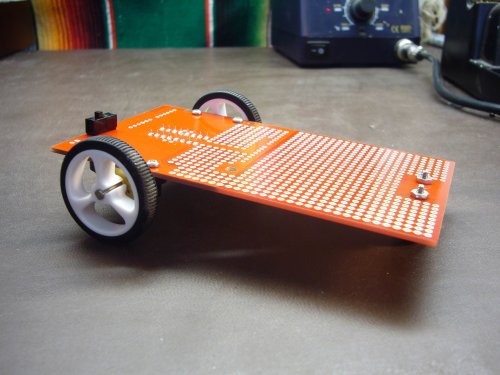 At this point, it looks more like a chariot, but it's getting there!

Then we install the caster. The caster comes with a couple of spacers (or backplates, I suppose), screws and nuts for mounting. Just bolt it all up according to your ride-height preference. 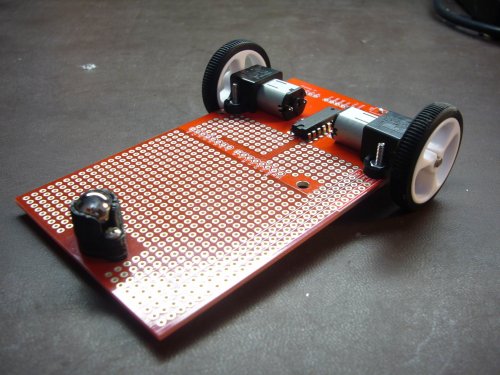 The caster bolted to the board.

Now's a good time to solder the motors to the board. I used a pair of 1x2 male headers, bent to fit and soldered up. 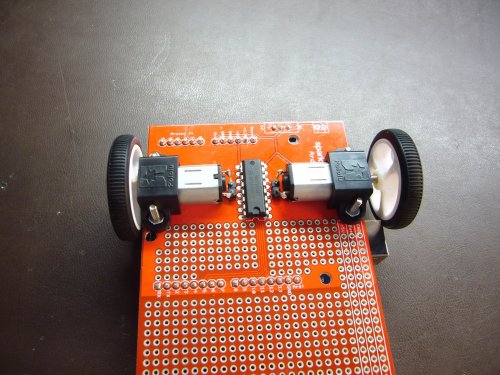 With a few tweaks, these headers fit nicely.

Next, we install the Arduino. For this build, I chose the USB version (a.k.a. Arduino Duemilanove). There is any number of methods to get this job done, this just happens to be what I did. There are two minor problems I?ve found with this configuration. I?ll address them as we go.

First, cut the male headers that you will need, 2 that are 1x8 and 2 that are 1x6, and install them into the female headers on the Arduino. The Arduino is to sit upside-down on the Ardubot board. The first problem with this configuration is that the programming header hits one of the mounting screws for one of the motors. To fix, clip off about 1/16? (or less) from the six pins that make up the header. 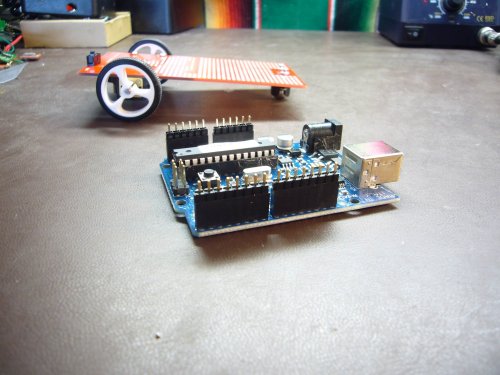 The Arduino posing with the Ardubot.

Then, install the Arduino onto the Ardubot PCB?and you should be seeing problem #2 right about now. The USB connector interferes with one of the wheels. The fix is to just slip the wheel out on the shaft a bit. This might make some people edgy, but this bot is unlikely to carry enough weight to cause a failure from this. Although I would encourage somebody to try, might be amusing.

In any case, adjust the fit to your liking and solder up the headers in the Ardubot board. 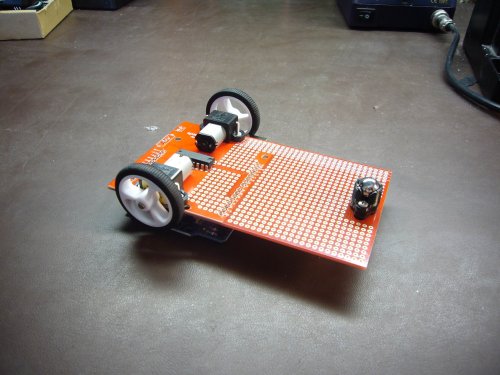 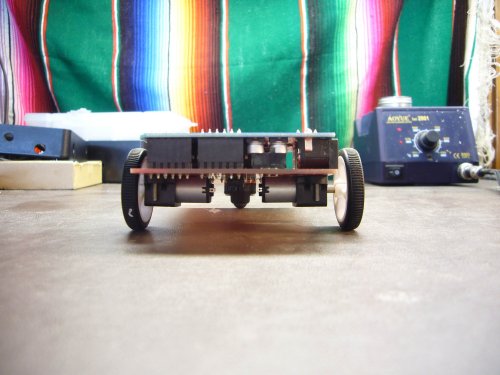 Once you're there, flip it over and admire your handiwork. 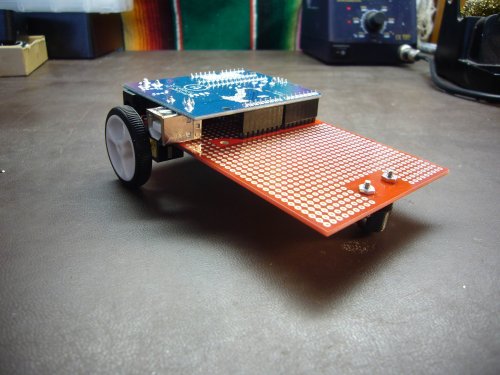 What this bot does is up to you!

Addendum: I forgot to mention the control inputs. Controlling the H-bridge is done with digital lines 3, 5, 6 and 9 on the Arduino. Lines 9 and 6 control the left side motor, lines 5 and 3 control the right side motor.

What now? The bot doesn't DO anything! Well, this is where you step in and play engineer. What do you want it to do? Surely, you didn't build it just to put it on a shelf and look pretty. So as an example, here's what I did.

Well, maybe it's not that annoying, but I did get a few gestures when some coworkers saw this thing wheel into their office and look at them. 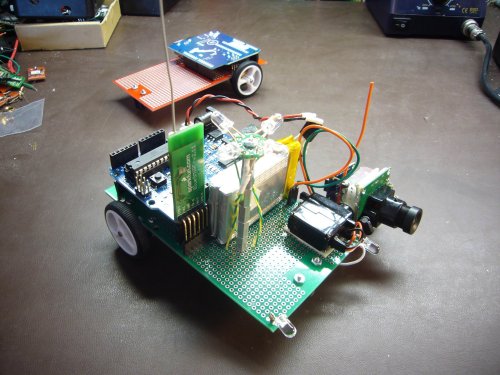 What are you lookin' at?

What you're looking at is an Ardubot that uses a BlueSMiRF for control input, and has a 2.4GHz video transmitter (it's the outdoor package that we sell, sku: WRL-09189, liberated from its' weatherproof casing). The idea is to go exploring from my desktop. It's got headlights (a pair of white LEDs on the front), and also an alternating blue and yellow LED pylon thingy sticking up out of the middle that flashes to hopefully keep people from ?accidentally? stepping on it. The camera is mounted on a servo that pans up and down, and it also has a microphone. The whole thing is powered by a 2-cell, series-wired 1100mAH lipo that I put together.

And while I'm thinking of it.... The battery header on the Ardubot PCB has been set up as one of our keyed battery connectors, but somehow I didn't have the foresight to put some kind of polarity indicators on it. I'll have to fix that in the silk for the next run, but for the time being here's a pic: 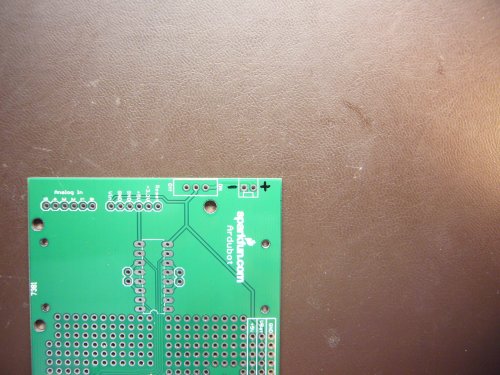 Not the most perfect silk screen, but it'll do.

The board provides busses for Vbat, 5V and ground, so powering anything extra is fairly simple. The 5V comes from the regulator on the Arduino, so bear that in mind as you add hardware. If you need more current, you can always add another 7805 or other 5V regulator. The Vbat bus runs from the main switch.

This was my original prototype, and I did it a little differently than the other one. In the first example I built everything with the PCB faced silk-down, and with this one I'm doing it silk-up. The main reason I wanted to do it that way was so that I could have the Arduino face up rather than face down. As added benefits, the USB connector and the programming header are no longer concerns.

Installing the Arduino this way isn't much of a trick, but I'll describe how I did it anyway. 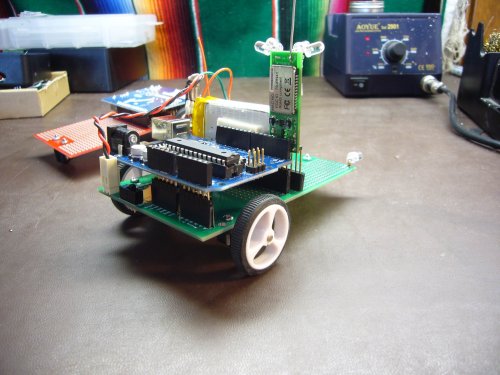 Ardubot in all its glory.

It's actually pretty simple. First, cut two 1x8 and two 1x6 female and male headers. Put the female into the Ardubot PCB, soldering one pin of each so that they're still loose-ish and able to be moved somewhat. Then solder one pin of each male header (short side) to the bottom of a corresponding female header on the Arduino. It should be obvious, but in case it's not, all of these male headers need to be soldered to the same relative side of the female headers on the Arduino in order for the boards to line up right. Then you slide it all together and solder up all the unconnected pins. It probably doesn't matter as to the sequence, but I do the females on the Ardubot PCB first, then I go around and do the rest of the male headers to the bottom of the Arduino. Again, your mileage may vary.

Control is through a terminal. I go forward, backward, left, right, pan up and pan down with keyboard input. 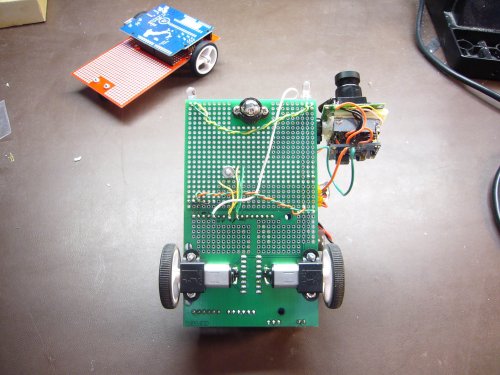 Just a quick shot of the undercarriage.

Honestly, so-so. I mean, it drives quite nicely, but I wish I had more time to work on it than I do. The biggest problem is the short range of the video. I can really get only a few offices away before it starts to break up really bad. I'd really like to get it on the wifi network with a web cam so people on-line could drive it around and go exploring. But for now, it's a cute toy.

Besides the shortcomings of the video, the platform is simple and robust, with lots of room for add-ons. I hope you all dig it.