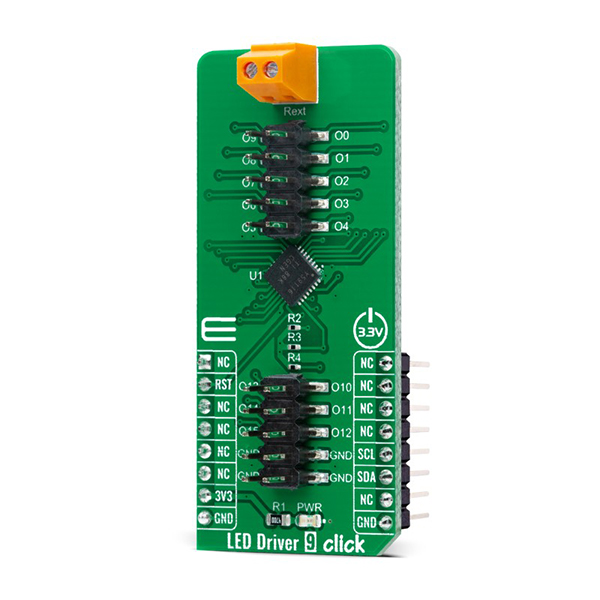 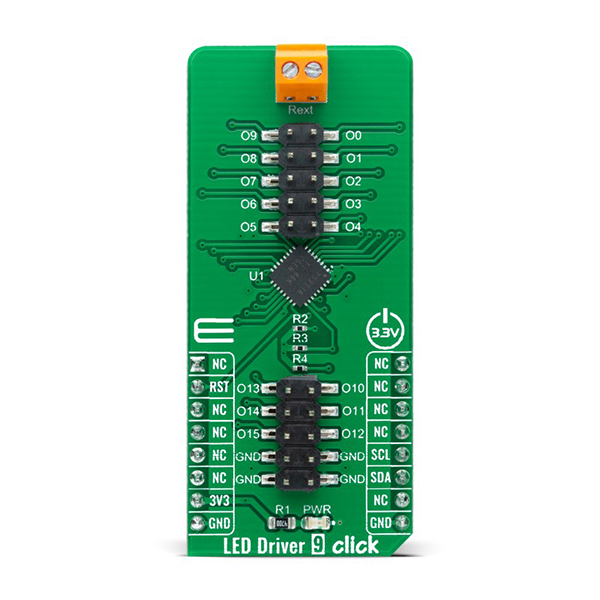 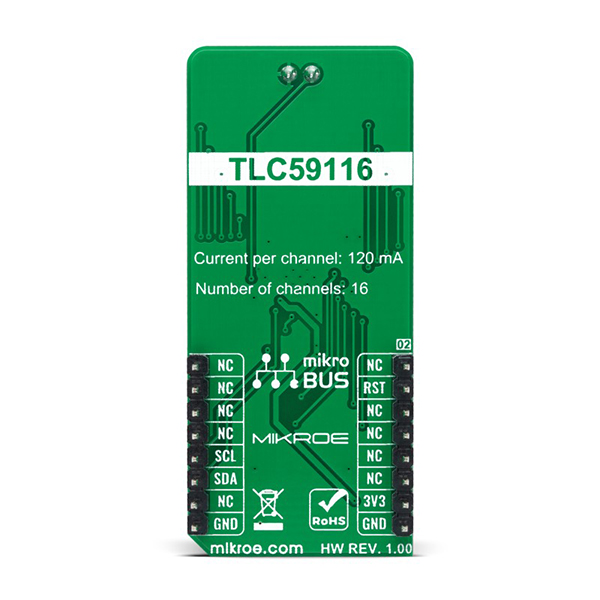 LED Driver 9 Click is a compact add-on board that simplifies the control of multiple LEDs. This board features the TLC59116, I2C bus-controlled 16-channel LED driver optimized for red/green/blue/amber (RGBA) color mixing and backlight application from Texas Instruments. Each 16-channel LED output has its 8-bit resolution (256 steps), fixed-frequency, individual PWM controller that operates at 97 kHz, with a duty cycle that is adjustable from 0% to 99.6%. The particular PWM controller allows each LED to be set to a specific brightness value and dim or blinks all LEDs with the same value. This Click board™ is suitable for RGBA color mixing and backlight application for amusement products, LED status signalization, home automation projects, industrial equipment, and many more.

LED Driver 9 Click as its foundation uses the TLC59116, an I2C bus controlled 16-channel LED driver optimized for red/green/blue/amber (RGBA) color mixing and backlight application from Texas Instruments. It operates within a VCC supply voltage range where its outputs are 17V tolerant. Each LED output, 16 LED drivers presented on two 2x5 male headers, with a maximum output current of 120mA per channel, is programmable at OFF and ON state, has programmable individual LED brightness with group dimming and blinking.

Each LED output has its individual PWM controller, which allows each LED to be set at a specific brightness value. An additional 8-bit resolution (256 steps) group PWM controller has a fixed frequency of 190Hz and an adjustable frequency between 24Hz to once every 10.73 seconds, with an adjustable duty cycle from 0% to 99.6%.

LED Driver 9 Click communicates with MCU using standard I2C 2-Wire interface, with a clock frequency up to 100kHz in the Standard, 400kHz in the Fast, and 1MHz in the Fast Mode Plus. The Software Reset feature allows the MCU to perform a reset of the TLC59116 through the I2C bus, identical to the Power-On Reset (POR) that initializes the registers to their default state, causing the outputs to be set high, which means that the LEDs are OFF. This allows an easy and quick way to reconfigure all device registers to the same condition. Also, this Click board™ has a Reset pin routed to the RST pin on the mikroBUS™ socket, which holds registers in their default states until the RST pin is set to a logic high state.