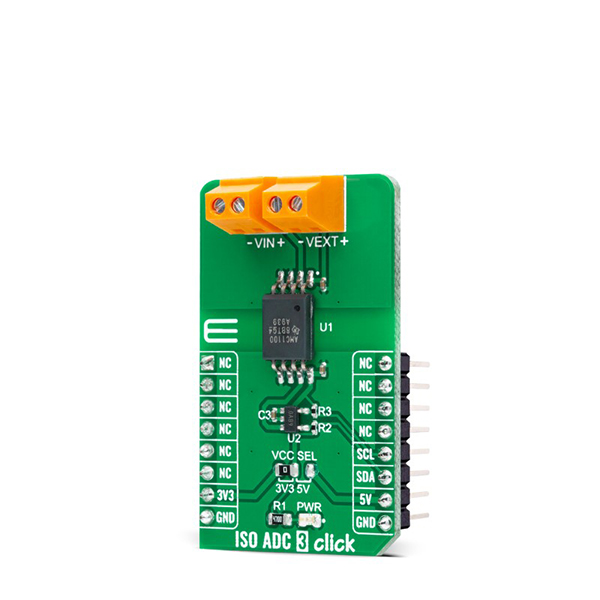 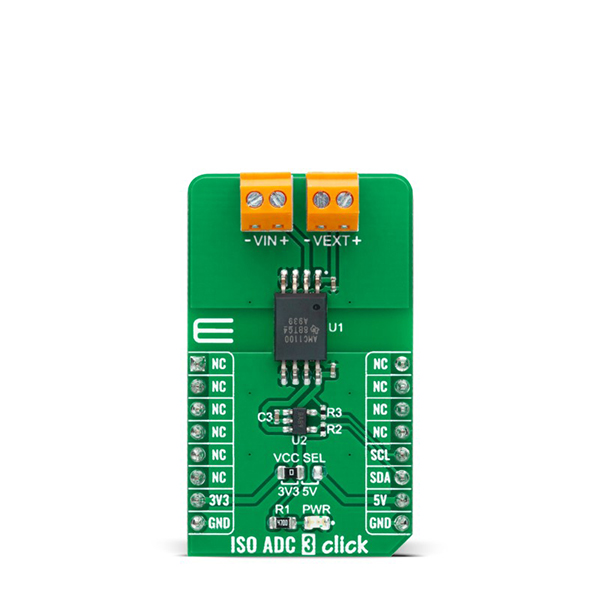 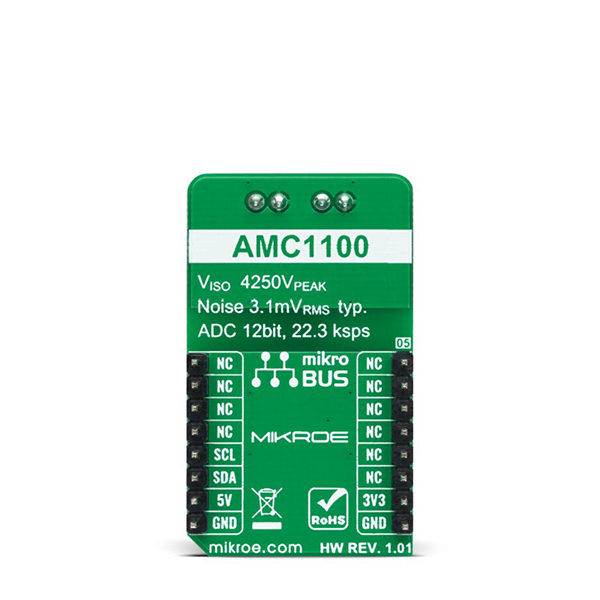 ISO ADC 3 Click is a compact add-on board that contains a single-channel precision isolation amplifier. This board features the AMC1100, a precision isolation amplifier with an output separated from the input circuitry by a silicon dioxide barrier that is highly resistant to magnetic interference from Texas Instruments. This barrier is certified to provide galvanic isolation of up to 4250Vpeak. The AMC1100 offers several features as linearity, high input common-mode rejection, and low DC errors and drift. These features make the AMC1100 a high-performance isolation amplifier suitable for accurate current and voltage measurement in energy-metering applications and for industrial applications where users and subsystems must be protected from high voltage potentials.

ISO ADC 3 Click is based on the AMC1100, a precision isolation amplifier with an output separated from the input circuitry by a silicon dioxide barrier that is highly resistant to magnetic interference from Texas Instruments. The AMC1100 can be used in conjunction with isolated power supplies to prevent noise currents on a high common-mode voltage line from entering the local ground and interfering with or damaging sensitive circuitry. It offers features as linearity, high input common-mode rejection, and low DC errors and drift, which makes it a high-performance isolation amplifier for industrial applications where users and subsystems must be protected from high voltage potentials.

The AMC1100 consists of a delta-sigma modulator input stage, including an internal reference and clock generator. The output of the modulator and clock signal are differentially transmitted over the integrated capacitive isolation barrier that separates the high-voltage and low-voltage domains. The silicon-dioxide based capacitive isolation barrier supports a high level of magnetic field immunity. These isolators transfer data signals differentially across the isolation barrier through two capacitors formed with a metal top plate and conductive silicon bottom plate on each side of a silicon dioxide dielectric. The received bitstream and clock signals are synchronized and processed by a third-order analog filter with a nominal gain of 8 on the low-side and presented as a differential output.

An analog signal from the AMC1100 can be applied directly to the MCP3221, a successive approximation A/D converter with a 12-bit resolution from Microchip, which ISO ADC 3 Click uses to communicates with MCU through a 2-wire I2C compatible interface. This device provides one single-ended input with very low-power consumption, a low maximum conversion current, and a Standby current of 250 μA and 1 μA. Data can be transferred at rates of up to 100 kbit/s in the Standard and up to 400 kbit/s in the Fast Mode. Also, maximum sample rates of 22.3 kSPS with the MCP3221 are possible in a Continuous-Conversion Mode with a clock rate of 400 kHz.

This Click board™ is designed to operate with both 3.3V and 5V logic voltage levels selected via the VCC SEL jumper. It allows for both 3.3V and 5V capable MCUs to use the I2C communication lines properly. However, the Click board™ comes equipped with a library that contains easy to use functions and an example code that can be used, as a reference, for further development.