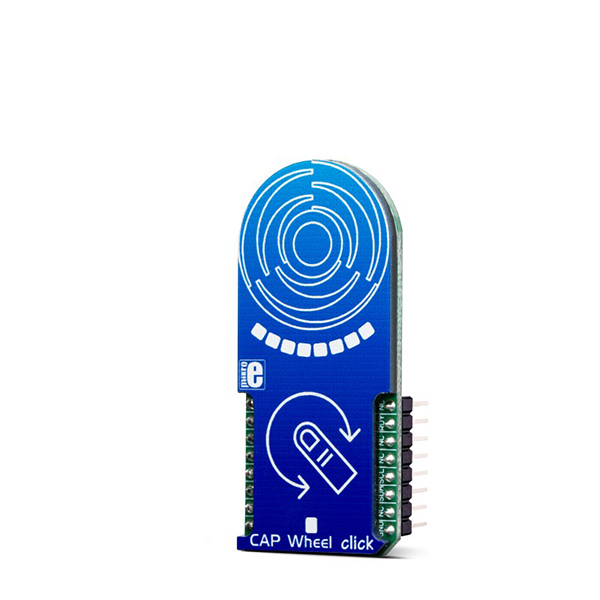 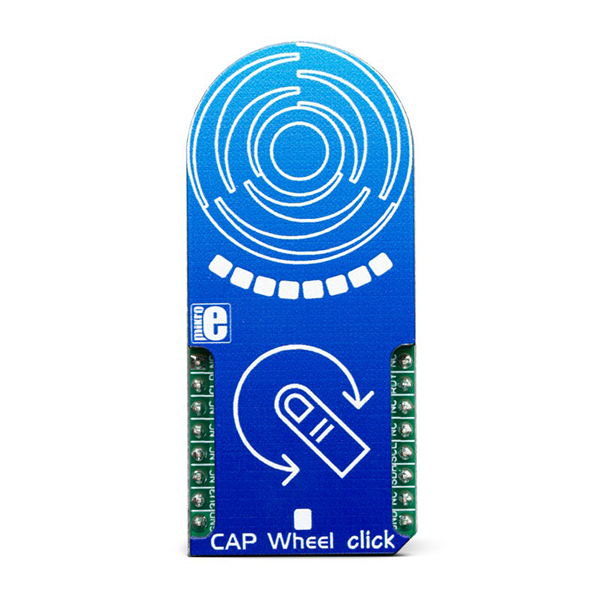 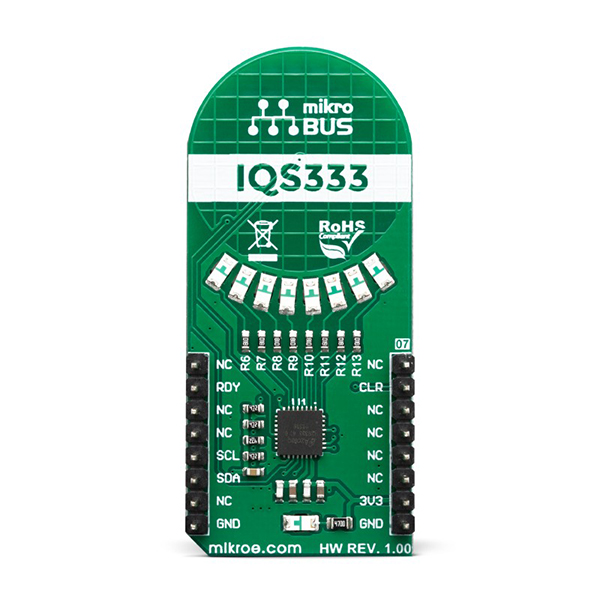 CAP Wheel Click is a capacitive touch sensor with round shaped electrodes integrated on a Click board™. This Click can sense touch even through plastic, wood, or other dielectric materials, which can be used to protect the surface of the PCB and the sensor pad trace itself. Therefore, this Click board™ comes with overlay, made of plexiglass. Unlike the mechanical button, the capacitive touch button lasts much longer, it is not prone to damage and wear over time and it is very reliable.

Capacitive sensors are a very popular method of controling various devices. Besides the aforementioned benefits, having a touch sensitive button on a device allows for a compact design, opens possibilities for various kinds of human-machine interface and - it looks good and modern, especially if 8 LEDs array that CAP Wheel Click has onboard is taken into account. CAP Wheel Click can find its place among many applications - for touch activated lighting controls, process control, touch activated control panels, toys and any other applications that need a switch or an encoder.

Although it looks simple at first glance, capacitive touch sensing is not an easy task. There are many parameters that need to be sampled, filtered, compared and processed before positive touch detection and its position are confirmed. To make this possible, Cap Touch Click utilizes the IQS333, ProxSense® IC, a 9-channel projected (or 7-channel self) capacitive proximity and touch controller from Azoteq. This IC has some advanced features such as the auto drift compensation, Long proximity range, Automatic adjustment for optimal performance (ATI), two Configurable 11-bit sliders/scroll wheels and more. These features enable CAP Wheel Click exhibit very reliable and accurate touch detection.

Capacitive touch sensing is based on detecting a change in capacitance, due to the influence of a foreign object. Basically, the capacitance of the sensor, also known as the antenna, is measured and monitored and if a significant change occurs, after processing by the detection integrator, a touch event is acknowledged. To maximize performance, many routing requirements need to be met in the sensing electrodes design. The relation between the sensing elements in position and size is crucial. CAP Wheel Click is designed with these requirements in mind and electrodes are „Self-Capacitive Wheel“ shaped.

CAP Wheel Click also contains 8 LEDs whose function can be user-defined. LEDs are connected to PWM LED driver pins on IQS333 which means that the user can turn LEDs on or off and control illumination, using the dimming modes that IQS333 supports.

The IQS333 IC interfaces to a primary controller via a 3-wire (SDA, SCL, and RDY) serial interface bus that is I2C™ compatible, with a maximum communication speed of 400kbit/s. The host MCU has the capability to force a communication at any time, by pulling the RDY line low. The communication will start directly following the current conversion cycle. If the event is terminated by the watchdog timer, the device will reset.

After every power on cycle, the device will recalibrate itself. It will take some time, so it should be taken into consideration when building custom applications. MikroElektronika provides libraries and the demo application, that can be used as a reference for any future designs.