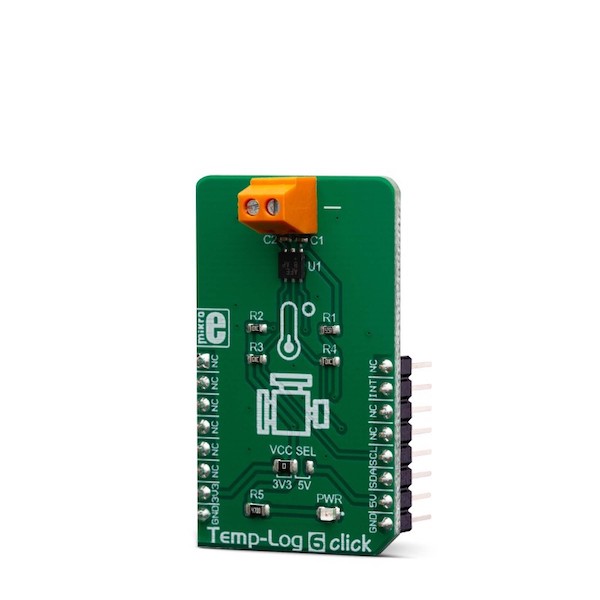 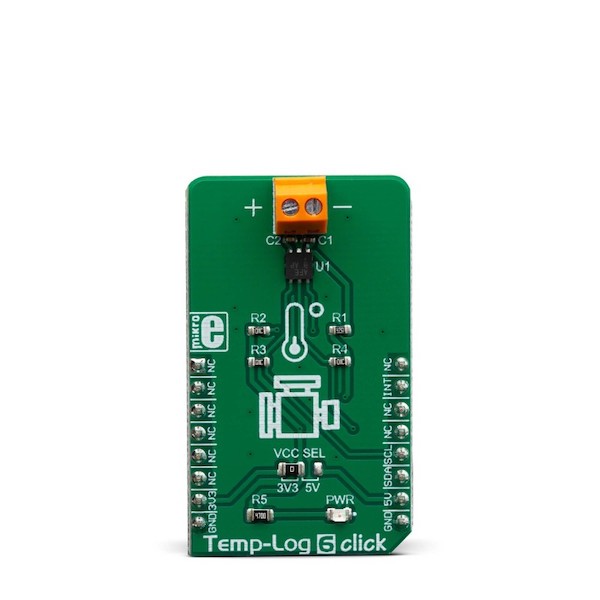 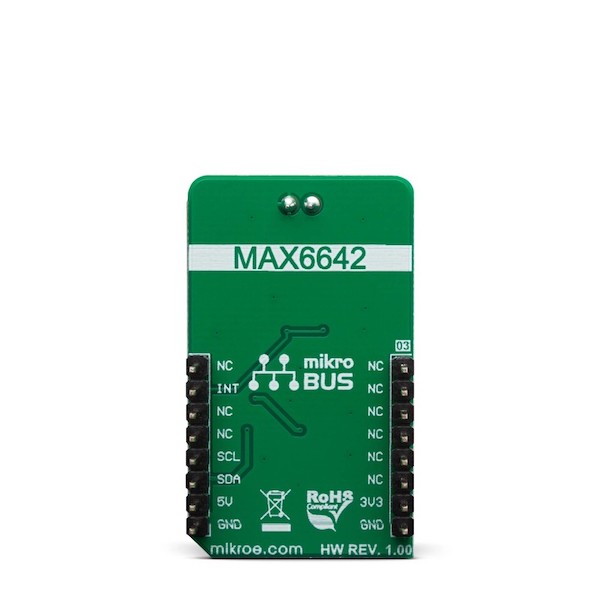 Temp-Log 6 Click is supported by a mikroSDK compliant library, which includes functions that simplify software development.

The MAX6642 features a high accuracy of ±1°C within the range between +60°C and +100°C, which is a critical thermal bandwidth of most IC with the substrate PNP transistor as a temperature sensor. However, the Click board™ can be operated within the range between -40°C to +125°C when used to measure the local temperature, or between 0°C and +150°C when measuring the remote PN junction. Features such as dual temperature measurement, high accuracy, and programmable ALARM events, allow this Click board™ to be used in many applications, including dual-zone thermal monitoring in FPGA, embedded, and PC systems, i.e. when it is required to monitor both the ambient temperature within the enclosure, as well as the IC die temperature, for test and measurement applications, and similar.

The main component of the Temp-Log 6 Click is the MAX6642, a ±1°C, SMBus/I2C compatible local/remote temperature sensor with an overtemperature alarm, from Analog Devices. This sensor is capable of measuring its own die temperature, as well as a temperature of a remote PN junction, which can be either a PNP transistor on a substrate of some integrated component (typically CPU, FPGA, ASIC or GPU), but also a discrete diode-connected PNP transistor with its collector grounded. There are some specific requirements for a discrete component when using it as a remote temperature sensor: it has to be a small signal PNP transistor with its collector grounded along with its base, while the emitter is connected to the DXP input pin of the MAX6642. Datasheet of the MAX6642 also states some forward voltage ranges for the highest and the lowest expected temperatures, so the transistor should be selected according to these parameters. The discrete component can be connected to the screw terminal at the edge of the Click board™.

The MAX6642 features a 10-bit ADC which results in having the 0.25°C resolution. For the local temperature sensing, there are only 8 bits of data available, while the full 10-bit resolution is used for the remote sensing. The MAX6642 IC automatically sends biasing current through the PN junctions, while the IC samples the forward voltage for the given current and calculates the temperature. The ADC integrates the result over a period of 60ms, reducing the noise that way. Therefore, the temperature acquisition is not particularly fast. In return, the temperature measurement results are more accurate and reliable.

The MAX6642 IC also features the ALERT reporting capability. If a programmed threshold is exceeded, the ALERT pin will be asserted to a LOW logic level. When the ALERT pin is asserted, it will remain latched until its STATUS register is read after the overtemperature condition no longer exists. Another way to clear the ALERT interrupt is to respond to the alert response address. This is a global I2C/SMBus protocol, where the host MCU broadcasts a Receive Byte transmission after the interrupt is received. One (or more) peripheral devices which generated this interrupt will respond, sending their I2C peripheral address, following the bus arbitration rules. This protocol is explained in more details within the MAX6642 datasheet. The ALERT pin is routed to the INT pin of the mikroBUS™ and it is pulled up by a resistor.

Temp-Log 6 Click uses an I2C interface to communicate with the host MCU. It is equipped with an SMD jumper labeled as VCC SEL. This jumper is used to select the power supply for the pull-up resistors on the I2C bus, allowing both 3.3V and 5V MCUs to be interfaced with this Click board™.