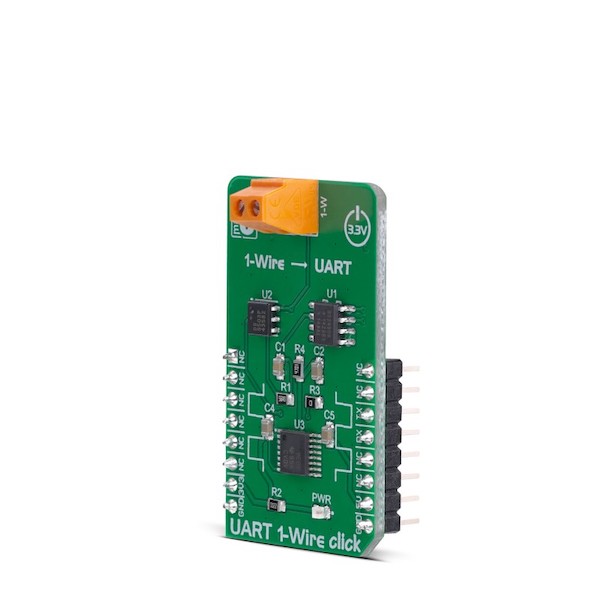 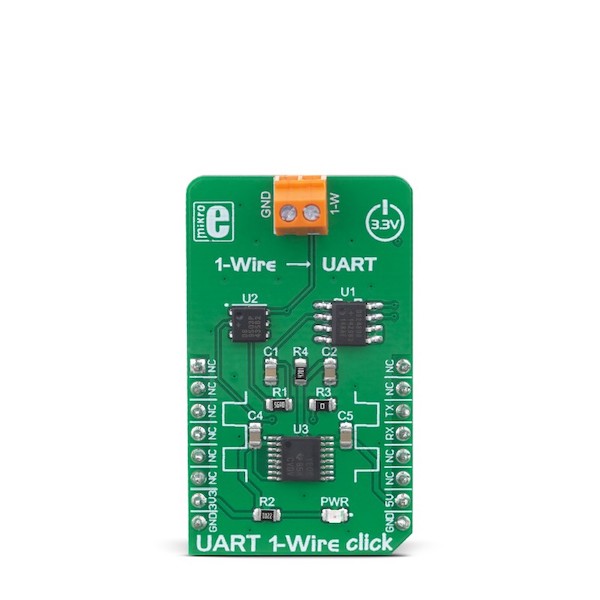 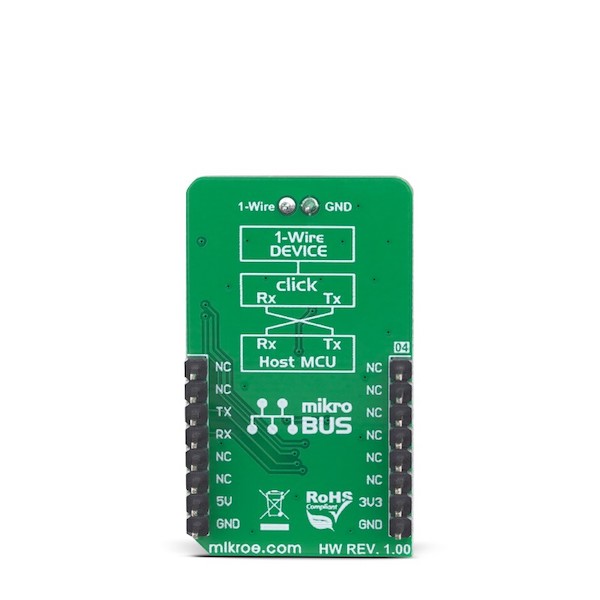 UART 1-Wire Click is used to convert standard UART or RS232 signals into 1-Wire® signals. Apart from other features such as the slew rate control for larger 1-Wire® busses, selectable data rate, an accurate self-calibrating time base, ESD protection and more, the main feature of the UART 1-Wire® Click, is that it manages all the sensitive signal timings involved in 1-Wire® communication, allowing rapid development of UART to 1-Wire® applications. It can automatically convert a single character from the UART bus into eight 1-Wire® time slots, thereby increasing the data throughput significantly, while reducing the microcontroller workload.

Featuring a set of options for fine-tuning the 1-Wire® bus performance, allowing it to accommodate to a wide variety of different applications, complex state machine which allow straight-forward conversion of characters sent over the UART interface, using the accurate crystal-driven UART timing as a reference for the 1-Wire® time base, UART 1-Wire Click represents a perfect solution for rapid development of 1-Wire® applications: it can be used to facilitate working with various iButton® devices or similar applications based on 1-Wire® communication, offering a simple and familiar UART interface to the host microcontroller (MCU).

1-Wire® is a very popular communication protocol developed by Dallas Semiconductors (acquired by Maxim Integrated in 2001), that requires only two wires: signal line and GND. In most cases GND is common to both devices, so the whole bus is reduced to just a single line. The 1-Wire® protocol is often used between different devices when low-speed communication is sufficient. With the appearance of iButton® devices and MicroLAN interfaces, the 1-Wire® protocol gains popularity. However, there are not many MCUs that have the 1-Wire® peripheral integrated onboard, so they must rely on bit-banging routines to provide accurate 1-Wire® signal waveforms. Producing accurately timed signals by using such routines may prove demanding for most applications. Because of this, devices such as UART 1-Wire Click simplify the firmware development greatly, reducing the host MCU workload.

UART 1-Wire Click is based on the DS2480B IC, a serial to the 1-Wire® driver IC, from Analog Devices. This IC is designed to directly interface the UART with the 1-Wire® bus. It performs data conversion using independent data rates for both interfaces, allowing standard and overdrive communication speeds. Internal timing generators of the DS2480B IC are continuously synchronized with the incoming UART data, which is typically driven by a high-precision crystal oscillator of the host microcontroller (MCU). This allows time-critical 1-Wire® signals to be generated by the IC itself, greatly reducing the processing load from the host MCU. Many physical parameters of both the UART and 1-Wire® buses can be fine-tuned so that the UART 1-Wire Click can be accommodated to any type of UART/RS232 to 1-Wire® signal conversion application.

The DS2480B IC can be observed as a complex state-machine. It can be configured by UART commands, so the IC must parse the incoming data prior to conversion. The device can be operated in two main operating modes: Command Mode and Data Mode. The Command Mode is the default state after the Power ON event. This mode allows the configuration parameters to be set. However, the DS2480B IC must be initialized prior to any operation: the 1-Wire® bus reset command should be sent over the TXD line at a fixed rate of 9600 bps. This is used only to calibrate the internal timing generators, without performing any action on the 1-Wire® bus. After the initialization, the DS2480B IC can be used normally.

The Data Mode is used to convert bytes received at the TXD line into their equivalent 1-Wire® waveforms, and to report the responses back to the host MCU through the RXD line. The datasheet of the DS2480B IC illustrates the operating principles of this IC by using the state transition diagram. Along with several examples at the end of the datasheet, it represents a very useful starting point for the application development. However, the included mikroSDK compatible library offers functions that simplify the firmware development even more.