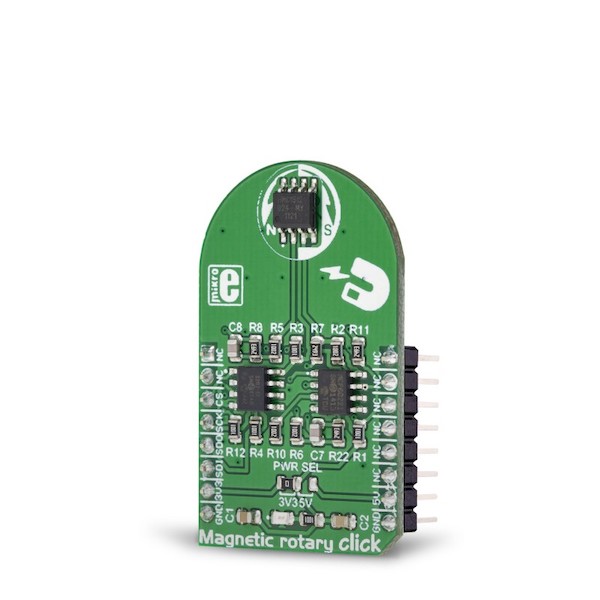 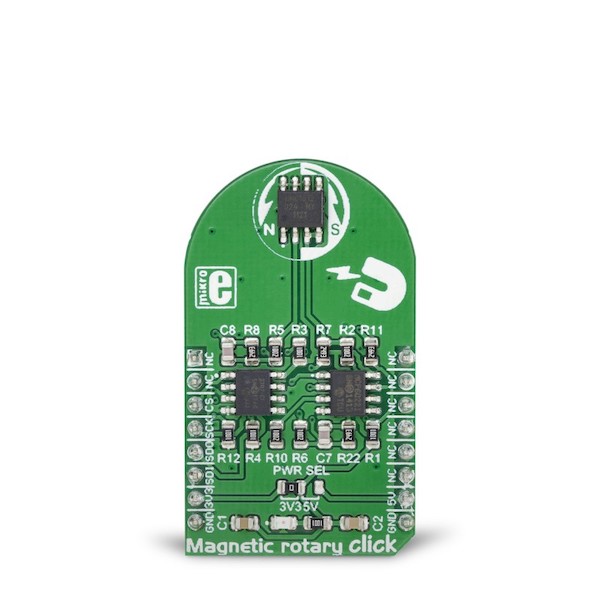 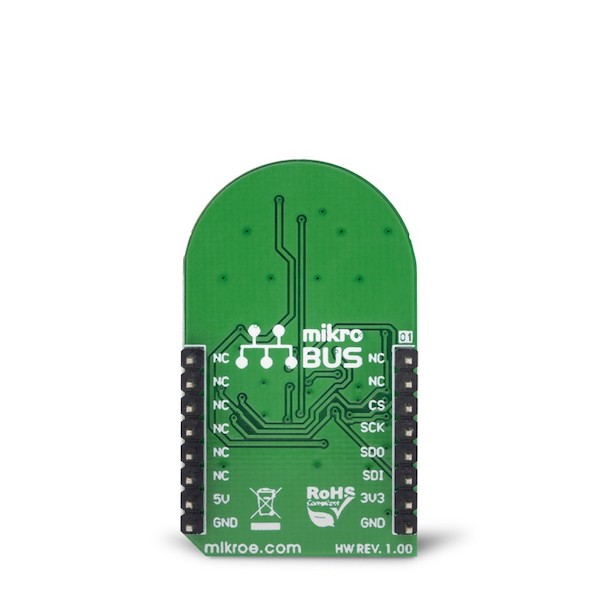 Magnetic Rotary Click is a very accurate position sensing Click board™ which utilizes the HMC1512, a magnetic field displacement sensor IC. This integrated sensor uses two coplanar saturated-mode Wheatstone bridges which consist of four magneto-resistive elements per bridge. The precision of up to 0.05° in the angular range of ±90° can be easily achieved using the Magnetic Rotary Click, making it far more accurate than the commonly used Hall-effect sensors.

The main component of Magnetic Rotary Click is the HMC1512, a magnetic displacement sensor, from Honeywell. The key feature of the HMC1512 IC is the high accuracy of the magnetic field sensing. Unlike most of the magnetic sensors on the market which rely on the Hall-effect, the integrated sensors of the HMC1512 IC are produced using the Honeywell proprietary Anisotropic Magneto-Resistive (AMR) technology, which yields an absolute magnetic field position sensing with the angular error of only 0.05° in the range of ±90°. The magneto-resistive sensing elements form a saturated-mode Wheatstone bridge, positioned in the XZ plane (parallel with the surface of the IC). The HMC1512 contains two such integrated bridges, bridge A, and bridge B. These bridges are positioned at the middle of the IC casing, which is the optimal position for rotary applications. One bridge is physically rotated by 45° from the other, allowing the HMC1512 IC to cover the full range of ±90° (2x45°), maintaining its sensing accuracy. The IC outputs an analog differential voltage with respect to the angle of the magnetic field.

The voltage from the selected mikroBUS™ power rail is directly applied to the internal Wheatstone bridge of the HMC1512. By construction, in the absence of the magnetic field, its outputs will be set at half the supply voltage (with the small offset of 3mV/V typically). If there is a magnetic field positioned at 0° in respect to one of the bridges, it will cause no disbalance of the magneto-resistive elements for that bridge. However, in the other bridge, the same magnetic field will cause it to reach its peak output value, since that bridge is rotated by 45°. The voltage change on the outputs can be then calculated using the following formulas:

The second bridge which is physically rotated by 45°, will have its output defined by this formula:

The datasheet of the HMC1512 offers a more detailed explanation, along with some use cases. However, Magnetic Rotary Click is supported by the mikroSDK library, which offers easy to use functions. All necessary calculations are encapsulated in these functions, allowing rapid application development. The included example application can be used as a reference and a starting point for a custom design.

Magnetic Rotary Click uses the MCP3202, a two-channel, 12-bit A/D converter (ADC) with SPI Interface, by Microchip. This ADC has a high resolution which can be used even for more demanding applications. At 0°, the ADC will output half of its full-scale (FS) value, and it will swing towards 0 if the sign of the orientation of the magnetic field is positioned towards the negative direction, and 4095 if the orientation of the magnetic field is positioned towards the positive direction. Each bridge output is routed to a separate ADC input, so it can be independently converted. The MCP3202 uses the power supply as the reference voltage, allowing ADC conversion within the range of the input signal. Converted output values can be read via the SPI interface, routed to the mikroBUS™ SPI pins for easy interfacing with a vast number of different microcontrollers (MCUs).