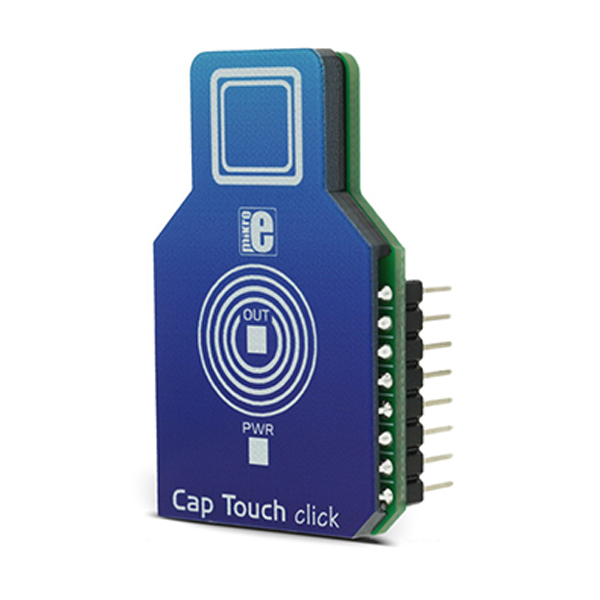 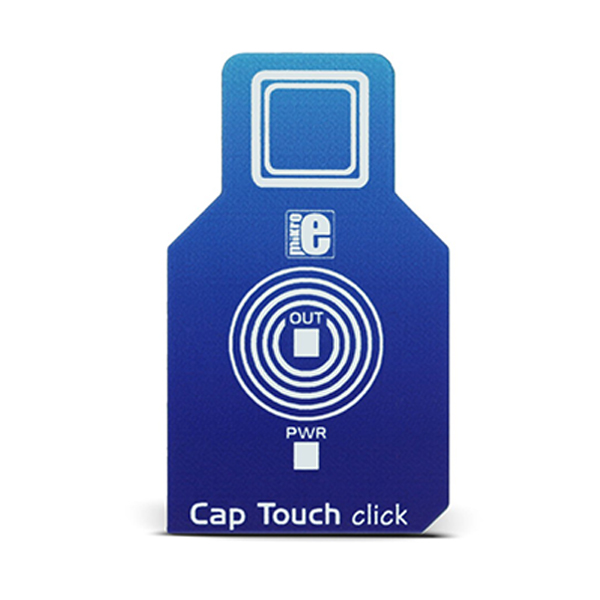 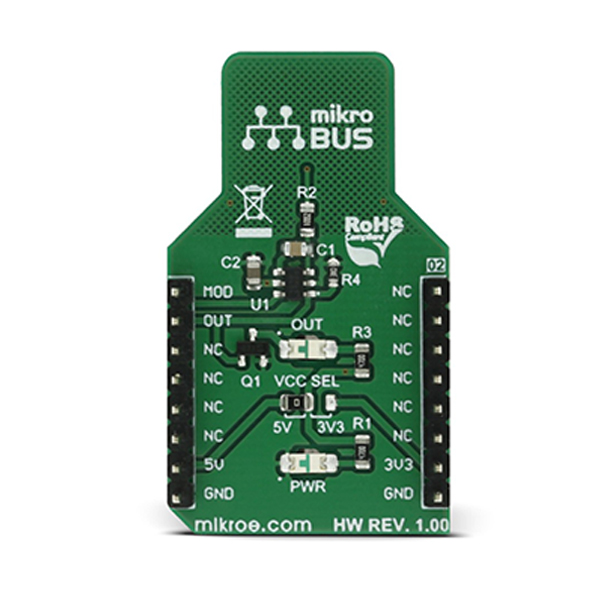 Cap Touch Click is a capacitive touch sensing button, integrated on a Click board™. It can be activated by touch. This Click can sense touch even through plastic, wood, or other dielectric materials, which can be used to protect the surface of the PCB and the sensor pad trace itself. Unlike the mechanical button, the capacitive touch button lasts much longer, it is not prone to damage and wear over time and it is very reliable.

Capacitive buttons are a very popular method of powering up various devices. Besides the aforementioned benefits, having a touch sensitive button on a device allows for a compact design, opens possibilities for various kinds of human-machine interface and - it looks good and modern, especially if accompanied by a LED that turns on when activated, just like the one on Cap Touch Click. Cap Touch Click can find its place among many applications - for touch activated lighting controls, touch activated control panels, toys and any other applications that need a switch or a button.

Although it looks simple at first glance, capacitive touch sensing is not an easy task. There are many parameters that need to be sampled, filtered, compared and processed before positive touch detection is confirmed. To make this possible, Cap Touch Click utilizes the AT42QT1010, a single-key QTouch® touch sensor IC from Microchip. This IC has some advanced features such as the self-calibration, auto drift compensation, noise filtering and proprietary QTouch® technology, based on the patented charge-transfer method. These features enable Cap Touch Click exhibit very reliable and accurate touch detection.

Capacitive touch sensing is based on detecting a change in capacitance, due to the influence of a foreign object. Basically, the capacitance of the sensor, also known as the antenna, is measured and monitored and if a significant change occurs, after processing by the detection integrator, a touch event is acknowledged. To successfully perform the detection, many routing requirements need to be met, as the relation between the sensing elements in position and size is crucial. Cap Touch Click is designed with these requirements in mind, so it could successfully detect a touch.

This IC uses short bursts to monitor the capacitance and it features three modes of operation: Fast mode, Low Power mode and SYNC mode. Switching between Fast and Low Power mode is done by pulling the SYNC/MODE pin, routed to the mikroBUS™ PWM pin, to a HIGH or LOW logic level, respectively:

After every power on cycle, the device will recalibrate itself. It will take some time, so it should be taken into a consideration when building custom applications. MikroElektronika provides libraries and the demo application, that can be used as a reference for any future designs.

The output of this device is too weak to drive a LED. Yet, a touch button is not good without the LED or other indication of its state. In order to drive a LED, Cap Touch Click is equipped with the N-type MOSFET transistor, which is activated by the output pin of the AT42QT1010 IC. It can drive one red LED without a problem.

The onboard SMD jumper labeled as VCC SEL is used to select the operating voltage of the device. It is capable of working with both 3.3V and 5V capable MCUs. Besides PWM pin, used for mode selection and the INT pin, used to signal the button state to the MCU, no other lines of the mikroBUS™ are used.