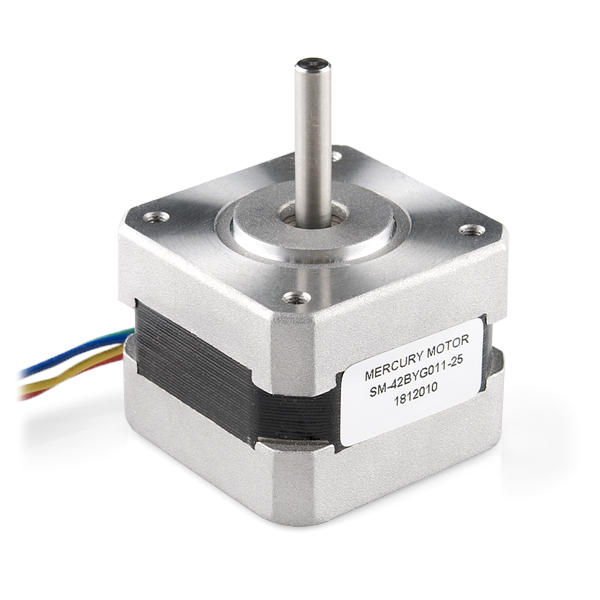 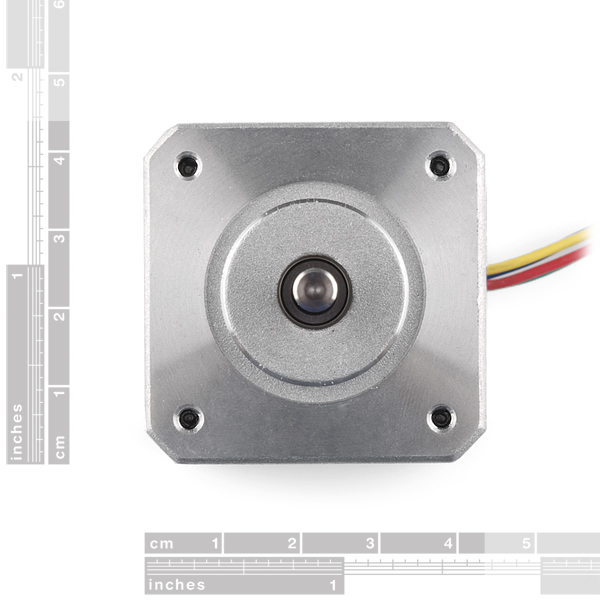 This is a simple, but very powerful stepper motor with a 4-wire cable attached.

This is a Bipolar Motor.

Get started using the SparkFun Easy Driver for those project that need a little motion.
Favorited Favorite 13

You can find the "Torque vs Speed Curves" here .

The number of steps for a full revolution looks to be about 1600 microsteps since the stepper motor with cable has a step angle of 1.8 degrees (...360/1.8 = 200 step stepper ) and the EasyDriver has a range of 8 microsteps for a full step.

about 8 years ago by Member #513903 verified purchaser

Very nice product, works as described, would be even greater if it had a universal mounting hub included...

Perfect for the job.

about 7 years ago by Member #507443 verified purchaser

Used to drive a power focuser on a telescope. Plenty of torque and robust. Trial and error methods mean errors - no problem for this motor.

about 8 years ago by RobotCamera verified purchaser

I own three of these motors, and use them for video production, microphotography (controlling the positioning of equipment), and robotics projects. They seem reliable, have enough torque for all of my needs (so far), and can be nicely driven either by H-bridge chips like the L293D, or by more feature-rich motor drivers like the EasyDriver.

But as I just discovered, working with SLF radio frequency, which is what you are generating when switching these motors (and all steppers) at typical speeds, is not always carefree. The RFI/EMI produced can interfere with sensitive input pins on microcontrollers, and in my case, an IR receiver module (Vishay TSOP38238). The solution is pretty easy, though - if a part is being influenced by EMI, shield it by surrounding it with grounded conductive material. You can buy shielding, or make your own. I am shielding my IR receiver module by placing it on a piece of PCB with a large ground plane that sits between the IR receiver and the stepper controller, output traces, wiring, and motor.

Another thing I like about this motor, which is perhaps a little odd, is the very long cable. I usually only need half the length. I cut it in half and braid it. But the other half I cut off? It makes excellent stranded hook-up wire! So hey, bonus hook-up wire :)

For hooking this motor up to projects in a reversible but still dependable manner, I recommend 4-pin mini XLR plugs and jacks. They can be pricey but are worth it because accidentally disconnecting a running motor while attached to a controller can destroy the controller. I have also used S-video (4-pin mini DIN) connectors in the past, but after trying mini XLR, I found it to be a far superior solution.

Last thing to note - you can dissemble these motors to see how they work, and put them back together easily. Once opened up, you just have to tug on the rotor a bit because there are fairly strong magnets in there. You can also reverse the axle so it comes out the other side - I had to do that for one project to get the motor mount where I wanted it.

about 8 years ago by Member #636145 verified purchaser

This makes a great low RPM generator for windmill , waterwheel science fair projects .. puts out 6 Volts AC at about 70 RPM which will power 5 V. LED's.

about 8 years ago by Member #432286 verified purchaser

We also used the cheap circular stepper motor from sparkfun and it only produced 0.030A at 12 m/s and 1450 rpm.

EDIT: In an earlier review, I incorrectly assumed that the "friction" seen with this motor was due to the magnet rubbing against the outer walls. Actually, this "friction" was the detent torque - seen when the wires were shorted together. When used as a generator, the load (resistance) across the wires will determine the amount of detent when you try to spin the turbine.

about 7 years ago by Member #447117 verified purchaser

Didn't have much trouble at all getting this thing up and running with an Arduino Uno and a TI SN754410 H-Bridge.

about 7 years ago by rickcjmac verified purchaser

It is a surprisingly strong and simple motor. I used the TB6612FNG with a 12 V wall wart and it started right up!

about 7 years ago by Member #772669 verified purchaser

I wish we had a motor mount too. When I need to mount these, I have used a plate that I drill to match the mounting holes. Not an off the shelf solution I know. But it might help someone. Thanks

Solid litte motor that does what I need

about 6 years ago by Red Imp Robotics verified purchaser

I'm making a diy eggbot/spherebot and I'm driving it with the Easy Driver. Not quite finished with the project yet but so far it's working very well.

about 5 years ago by Member #127088 verified purchaser

This is a great stepper motor! It has plenty of torque but can also be driven to pretty high speeds before it starts to skip. I'm personally using it in a self-balancing robot, though I plan to buy another to try to build a little smart lock.

Connectors: These just come with long stranded wires—there are no connectors. I would highly recommend using a JST or XLR (like RobotCamera recommended) to connect these. You can even solder a 4-pin JST to your board (like an EasyDriver) to ensure that you always hook up the motor correctly, and that it doesn't come disconnected while the driving circuit is running (which can destroy your circuit). I think Sparkfun sells JSTs labelled as "polarized connectors" but you can easily find huge packs of JST connectors ready-to-crimp. Then, buy some cable braid so that your cables don't go spaghetti all over your build.

Side note: I kind of wish that they just had a JST jack on their side instead of the wires. That's how my 3D printer's steppers are connected, but this works fine too.

Mounting: These don't seem to be easily mountable from the back—only the front. I haven't tried, but I think removing the back screws would result in the motor housing coming apart, which isn't great for mounting. The fact that these are front mount only is just a little caveat to note. They're very sturdy regardless of how you mount them.

about 5 years ago by Member #371756 verified purchaser

As a hobbyist I am not stressing the motor but it seems to work fine. I have written code to ramp up/down to meet my needs.

These stepper motors work as well as i expected, i bought 2 of them and one seems to skip periodically, If you spin the shaft while it isnt even hooked up to power the bearings kind of bind every third or forth rotation, seems to only effect long runs.

Hello, and thanks for the review.

Make sure the wires are not touching each other because that can cause an issue like you're describing. If it's not the wires and the bearings seem to be the issue, contact us using this form for help.

Only complaint is that the wires that come off of this motor are a pain to strip.

I'm using this with the actobotic mount, standoffs and shaft coupler, and everything works great.

I use the EasyDriver with a 12V, 1A power supply without issue.

The long cable is helpful.

I tried this motor along with the "EasyDriver - Stepper Motor Driver" board to get a feel for working with the stepper motors using the Raspberry Pi 4B. Originally I tried using the Pi-Plates Motor board to control a generic NEMA 17 stepper motor, but without getting them matched up (amp-wise) I ended up losing the Pi-Plates board to a learning experience... Getting both components recommended at SparkFun solved the issue, and IMO the EasyDriver offers more advanced control of the motor than the Pi-Plates board does.

I bought this to be controlled by a Raspberry Pi Pico RP2040 and found using an EasyDriver and MicroPython, the stepper motor performs very smoothly. I'm looking forward to adding this to a Robotics project.

about 8 years ago by Member #688742 verified purchaser

i buy four parts, while 2 of them have problem with spring force and this stall the rotor when try to rotate it by hand

i fix it no big deal