Retired COM-13667 RoHS 9
Note: Retired Product
This is a retired product. There is an updated version available: COM-16347 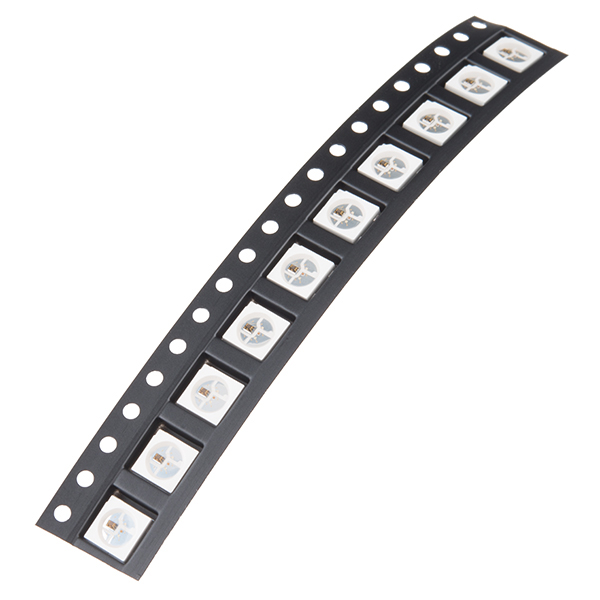 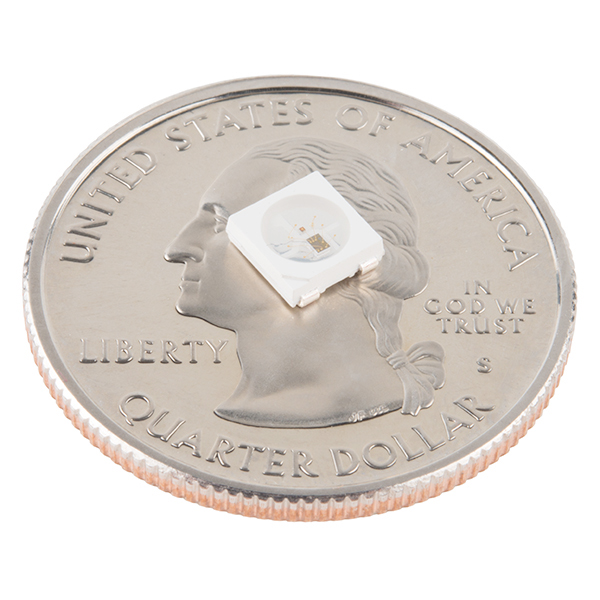 Retired COM-13667 RoHS
9
Note: Retired Product
This is a retired product. There is an updated version available: COM-16347

The WS2812B (or "NeoPixel") may look like a common 5050-sized (5x5mm) SMD LED, but there’s actually an integrated control circuit embedded inside there too. If you look really hard, you can see the tiny black chip hidden in there, along with minuscule gold wires connecting the chip to the LED. This LED is certainly more than meets the eye! The 'B' at the end of the WS2812 name denotes that these specific LEDs are equipped with and only require FOUR pins instead of SIX!

The LED itself is unlike most RGB (Red/Green/Blue) LEDs. The brightness of each color can be adjusted using a serial string to one of 256 different levels. That means there are 16,777,216 (2563) possible combinations of colors. You can produce any color from white to black (off), or salmon to sienna.

Make an RGB colored cloud light! You can also control it from your phone, or hook up to the weather!
Favorited Favorite 29

How to create a pixel string with the WS2812 and WS2812B addressable LEDs!
Favorited Favorite 9

about 6 years ago by Member #737587 verified purchaser

These LEDs were easy and fun to work with! The only downside to working with such small LEDs, and other small components as well, is the pins ended up being very fragile. After soldering, be very careful with handling the LEDs. The solder joint was stronger than the pins themselves. On 4 of my LEDs, the Din pin snapped off because of an accidental tug on the wire that was soldered to it. I guess that's the trade-off for having small components, however.

about 6 years ago by GaretBiglow verified purchaser

Once you get these running, they're the cats ass for sure. I embed these in all sorts of projects. The only issue I have is during the reflow process. I use solder paste and a reflow oven and I have failures, 2 in 10 (firing a standard reflow curve). I then use my hot-air rework to drop in replacements. I e-mailed Adafruit about this a while ago, and they said their supplier said they needed to be tempered before reflowing? Never heard that term before. Can you offer any advice Sparkfun?a

Used on several projects and they're great!

about 4 years ago by Member #832019 verified purchaser

They've been very reliable and worked consistently. I've purchased over 200 of them for projects and never had any troubles.

What COLOR these create

about 4 years ago by Member #144180 verified purchaser

I was really impressed with the colors these modules created, just so vibrant they are mesmerizing.

Good LEDs, but not packaged correctly.

about 3 years ago by MatthewR verified purchaser

The LEDs are good (as expected, so five stars), but the packaging leaves something to be desired. According to the datasheet these need to be baked for 48 hours at about 70C unless they were already baked and kept in a sealed package. They are extremely fragile internally, and tiny amounts of moisture will turn to steam when soldering, causing internal damage (one color might be out, or perhaps the entire LED will fail). If you bake the LEDs (as the datasheet requires), the LEDs will dry out and will be much less likely to be damaged during assembly. The datasheet recommends using the LEDs within 2 hours of baking, or within 2 hours of removing from a sealed package. Mouser and other distributors recognize this and ship components pre-baked and in a sealed package, and SFE should consider doing so as well.

I know from personal experience that baking (dehydrating) these LEDs before soldering is absolutely critical (at least during the more humid summer months). Even if not baked and sealed, SFE should at least include a note to the user warning of this critical step.

I ordered six packs of these SMD LEDs (60 LEDs total) for some modular synthesizer projects and all have worked fine. Cheaper options are available if you can wait an undefined length of time for oversees shipping so, as long as Sparkfun's inventory lasts, they're about the best thing going.

Needed them for underglow on a macro keyboard. Worked great and was much easier than trying to desolder some off a strip.