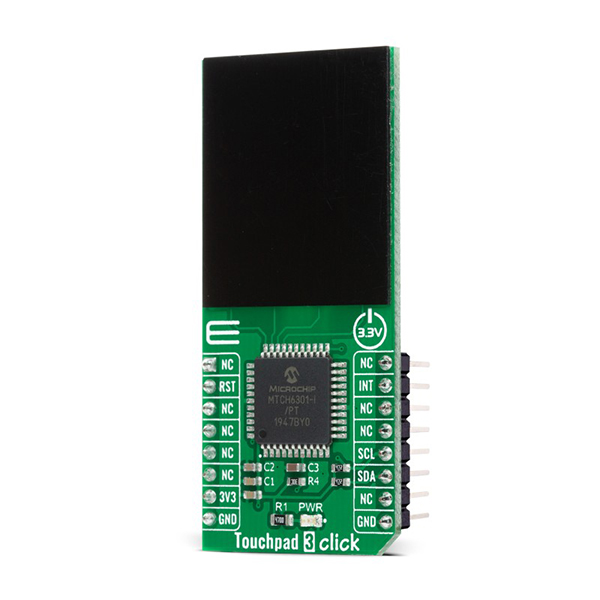 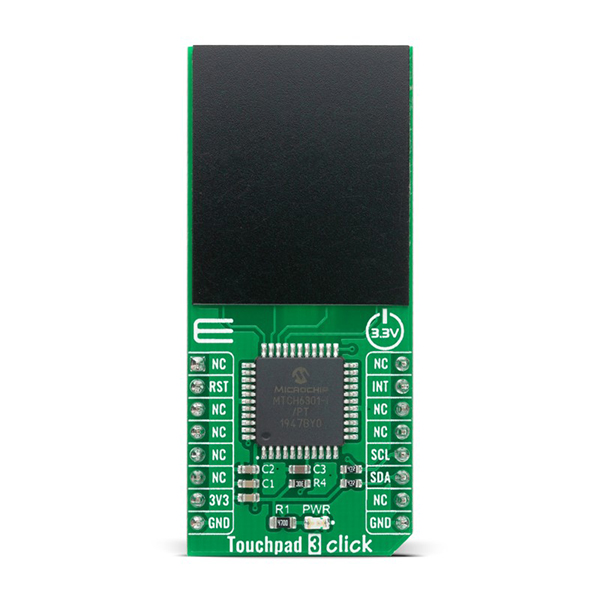 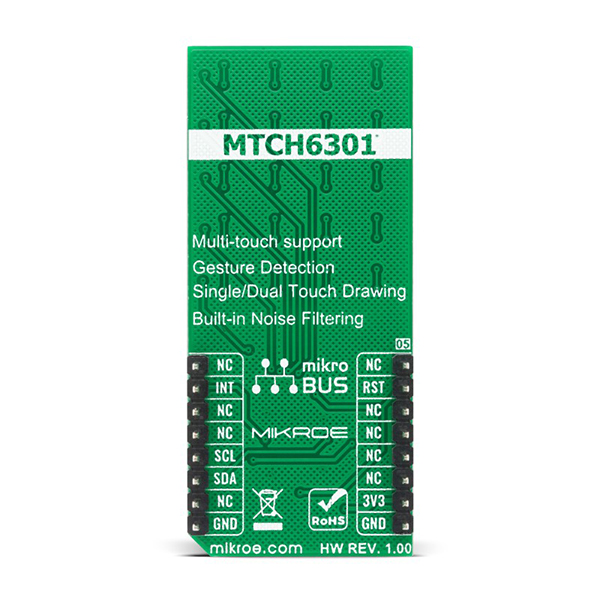 MIKROE Touchpad 3 Click is a compact add-on board that allows users to easily integrate projected capacitive touch into their applications. This board features the MTCH6301, a turnkey capacitive touch controller that makes it easy for users to use popular multitouch and gesture interfaces from Microchip. This controller’s sophisticated combination of Self and Mutual capacitive scanning for XY touchscreens and touchpads enables several features, including single and dual-touch drawing, the reporting of 11 single-finger gestures, and the detection of up to 10 touches. This Click board™ is suitable for human-machine interfaces, keypad or scrolling functions, single-finger gesture-based interfaces, and more.

Touchpad 3 Click is based on the MTCH6301, a turnkey capacitive touch controller that allows users to quickly and easily integrate projected capacitive touch into their applications from Microchip. The MTCH6301 is characterized by a multitouch function that allows up to 10 pad touches, gesture detection and reporting, single and dual touch drawing, self or mutual signal acquisition, as well as built-in noise detection and filtering. Single finger gestures are a fast and intuitive way to navigate a feature-rich human-machine interface. It supports 11 single finger gestures natively, without requiring interaction from the controller processor.

On the front side of the Touchpad 3 Click, there is a clearly defined field that represents a touchpad area. This area is a matrix of conductive electrodes on the PCB, electrically isolated from each other, arranged as rows and columns of X and Y. An electrode consists of multiple diamond-shaped elements, each connected to the next with a conductive neck.

Touchpad 3 Click communicates with MCU using the standard I2C 2-Wire interface that can operate at a maximum speed of 400kbps. The MTCH6301 I2C protocol follows a serial streaming format, not a register-based protocol. For successfully accomplished I2C protocol, the device will assert the active-high INT pin, which is held low during all other activities, whenever a new packet of data is ready to be transmitted to the host. This event can happen under two conditions, when a command has been sent to the controller and when the new touch or gesture data is available, or when the response to this command is ready.

The INT pin, as mentioned before, routed on the INT pin of the mikroBUS™ socket, is utilized by MTCH6301 to signal when the data is available and that the controller should invoke a read. Alongside this feature, this Click board™ also has a Reset function routed on the RST pin of the mikroBUS™ socket that will reset the MTCH6301 by driving the RST pin low. When released, the device will assert the INT pin until it has finished initialization routines.

NOTE: Initiating a read from the device when INT is in a low logic state will result in an unpredictable response. Also, if the device is not read within 25ms of asserting the INT pin, a timeout will occur, and data will no longer be available.