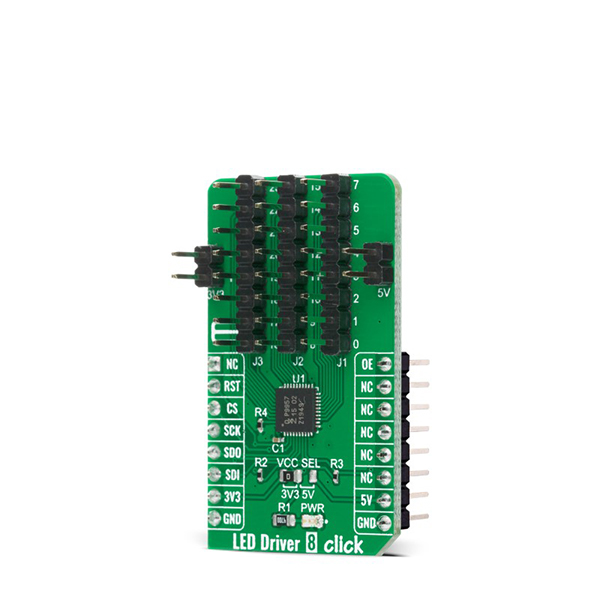 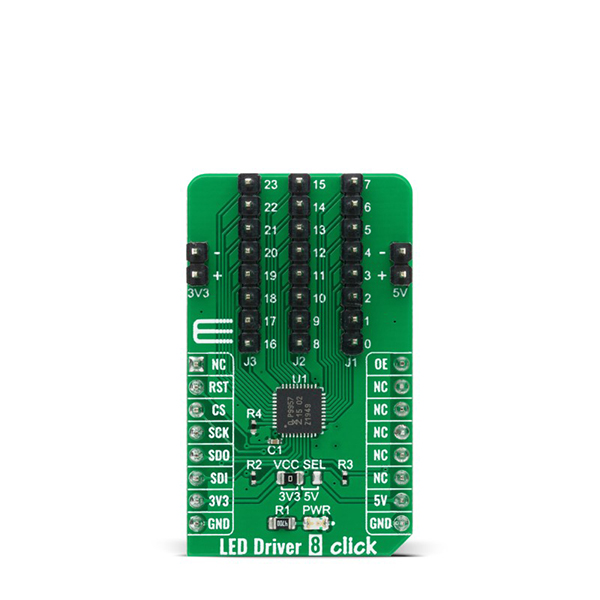 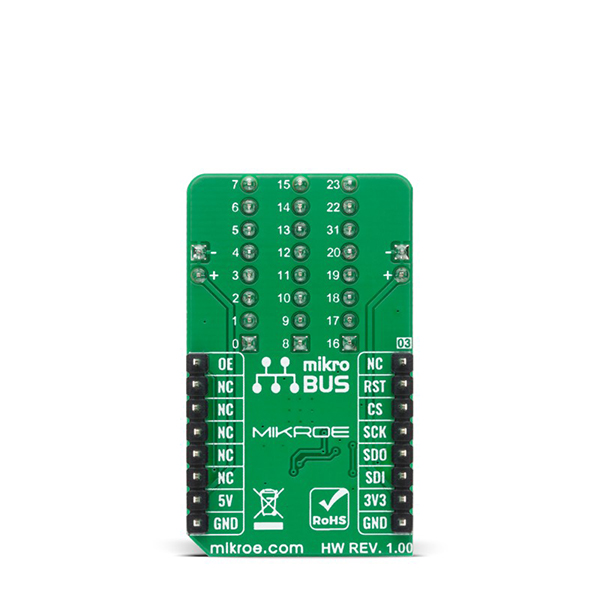 LED Driver 8 Click is a compact add-on board optimized for dimming and blinking 32 mA RGBA LEDs. This board features the PCA9957HNMP, 24-channel SPI-compatible constant current LED driver from NXP Semiconductors. It has 24 LED output channels with a programmable group dimming/blinking mixed with individual LED brightness, and programmable LED output delay to reduce EMI and surge currents. It also possesses gradation control for all channels where all 24 constant current output channels can sink up to 32 mA, and tolerate up to 5.5 V in its OFF state. As the name itself says, this Click board™ next to driving RGBA LEDs can be used in the purpose of LED Status signalization, in LED displays, LED backlight, keypad backlights for cellular phones, or handheld devices, and many more.

LED Driver 8 Click is based on the PCA9957, a daisy-chain SPI compatible 4-wire serial bus controlled 24-channel constant current LED driver optimized for dimming and blinking 32 mA RGBA LEDs from NXP Semiconductors. The PCA9957 has 24 internal 8-bit DACs with an operating frequency of 31.25 kHz and a duty cycle from 0% to 100% used to adjust brightness levels for each LED current source. Each LED output is programmable and can be turned off, on (with no PWM control), set at its individual PWM controller value, or both individual and group PWM controller values. Its output peak current is adjustable with an 8-bit linear DAC from 125 μA to 31.875 mA because of the R4 resistor of 2kΩ connected to the REXT pin.

Gradation control for all current sources is achieved through serial interface and allows the user to ramp current automatically without any help from the MCU. It has two operation modes for each group: Single-Shot Mode (output pattern once) and Continuous Mode (output pattern repeat). Each channel can be set to either Gradation Mode or Normal Mode and assigned to any one of six gradation control groups. These groups have four independent registers to control ramp-up and ramp-down rate, step time, hold ON/OFF time, and final hold ON output current.

The LED Driver 8 Click communicates with MCU through a daisy-chain SPI compatible 4-wire serial interface with a clock frequency up to 10 MHz. The input labeled as OE routed to the PWM pin on the mikroBUS™ blinks all the LED outputs and can be used to externally PWM the outputs, which is useful when multiple devices need to be dimmed or blinked together without using software control. The PCA9957 also has a short load and overtemperature detection circuitry, thermal shutdown feature which protects the device when the internal junction temperature exceeds the factory-defined limit, and a Reset function routed to the RST pin on the mikroBUS™ which is activated by sending an active low input on this pin with a minimum pulse width of 2.5μs.

This Click board™ is designed to be operated with both 3.3V and 5V logic voltage levels that can be selected via VCC SEL jumper. This allows for both 3.3V and 5V capable MCUs to use the SPI communication lines properly.