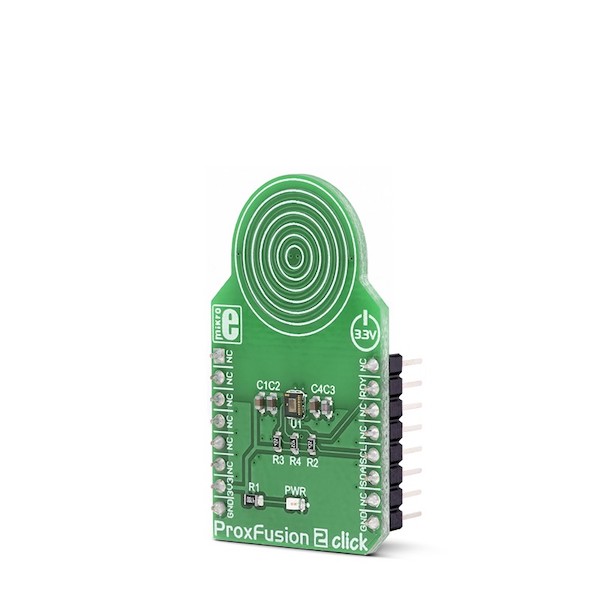 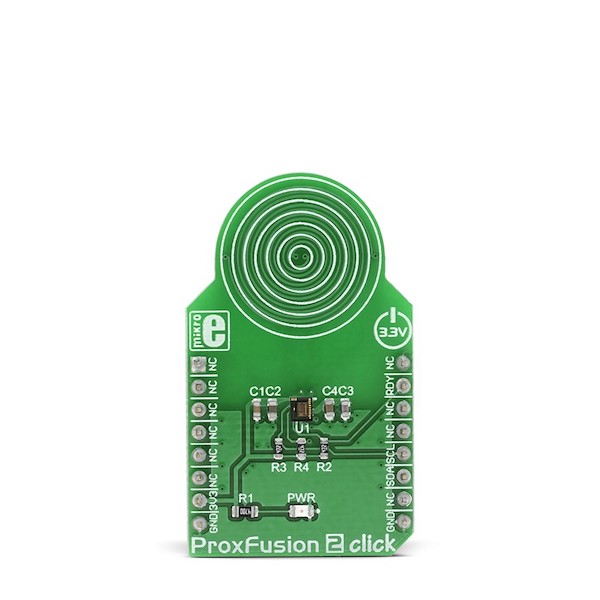 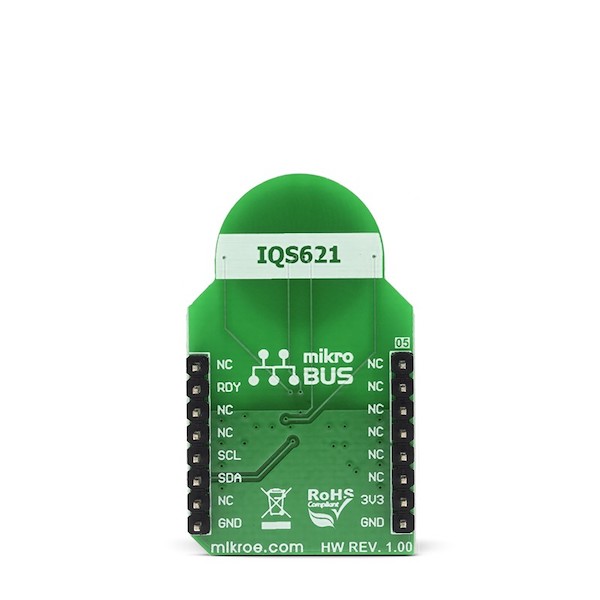 ProxFusion® 2 Click is an ambient lighting, capacitive, Hall-effect, and inductive sensing Click board™ which features a single multifunctional sensor IC. The IQS621 IC from ProxFusion® sensor series offers several ProxSense® engine capabilities, with additional sensor types. Thanks to its high level of integration, this sensor requires a low number of external components, which combined with its very low power consumption, makes it a perfect solution for IoT applications. Such applications can also benefit from a variety of sensors on the same die, allowing more complex devices to be designed or integrated, with no additional costs.

ProxFusion® 2 Click is supported by a mikroSDK compliant library, which includes functions that simplify software development.

Despite its compact size and a variety of available sensors, each of them provides a range of features which improve the accuracy and reliability. The IC contains a regulated power source, providing precise and thermally stabilized voltage reference for all the sensors. The Automatic Tuning Implementation (ATI) is a sophisticated technology which allows an optimized performance by ensuring that the sensitivity of the sensors is not affected by external influences such as temperature, parasitic capacitance, and changes in the GND reference. Aside from IoT, ProxFusion® 2 Click can be used for applications related to white goods and appliances, home automation and lighting control, human-machine interfaces (HMI), and more.

ProxFusion® 2 Click is based on the IQS621, a multifunctional sensor with the ambient light (ALS), capacitive touch, Hall-effect, and inductance sensing capabilities, from Azoteq. Their IQ Switch® ProxFusion® sensor series are one of the first sensors that incorporate several sensory functions on a same die. This makes the IQS62x series perfectly suited for compact designs, such as those used in IoT or in various home automation systems.

The IQS621 IC does not sacrifice any feature in favor of having multiple sensors on the same chip; on the contrary, it offers all the key features commonly found on other stand-alone sensors. The sensitivity of IQS621 is improved by using a regulated and stable internal power supply, along with the Automatic Tuning Implementation (ATI) technology, which provides consistent readings, regardless of environmental conditions.

The capacitive sensor is based on the proven ProxSense® technology. It allows self-capacitance sensing, adjustable proximity and touch thresholds, alternative ATI modes, and individual sensitivity setups. The IQS621 offers two distinctive user interfaces, that can be used with the capacitive sensor: Discrete Button UI, and Hysteresis UI. Both interfaces offer a set of programmable registers used to set up the sensing parameters such as thresholds, filter settings, ATI settings, etc. While the Discrete prox/touch UI is more suited to be used as the ON/OFF switch detector, the Hysteresis UI can be used to program sensing of more complex events.

An inductive sensor is also present on this IC. It can be used to detect the presence of metal objects. Again, two distinct user interfaces are available, each with its own set of registers. There is a Discrete Button UI, as well as the Hysteresis UI. The detection thresholds are widely adjustable, allowing a reliable detection of even smaller metallic objects. ProxFusion® 2 Click has the PCB trace coil area, which allows inductive detection. The same area of the Click board™ is used to sense capacitive events.

The IQS621 also features an ambient light sensor (ALS). The ALS UI outputs readings directly in Lux, so it requires no additional conversion. The ALS response is calibrated according to a human eye. It also features an IR filter, reducing the influence of the infra-red light. The ALS includes selectable range, as well as two threshold settings for day/night indication. ALS enables design of smart light switches: detecting night/day event might be used to regulate the lighting, for example.

Hall-effect sensor can be used to detect changes in the magnetic field. Unlike the capacitive and inductive sensors, the Hall-sensor does not require any external parts, since Hall-plates are embedded into the IC itself. Hall-sensor allows several events to be detected, as it is supported by an advanced signal processing algorithm. Besides other features, it has an ability to detect field poles orientation (N/S), allowing it to be used as a switch. This allows it to be used for different kinds of contactless HMIs.

A temperature sensor is one of the most commonly used sensors. It can be found even on other types of sensors, such as pressure or humidity sensors, since the temperature is one of the parameters that affect readings. The role of the thermal sensor in IQS621 is no different: it is used to provide calibration base for other sensors on this IC. However, this sensor is also available to be used to monitor the ambient temperature in any application.

Finally, each of the detected ON/OFF type events can be monitored in the Global events register. This is very useful as the host MCU does not to poll many different registers to discover these events. The communication with the IQS621 is done over the I2C interface, with the additional RDY pin. This pin is routed to the INT pin of the mikroBUS™ and indicates a communications window.

The Click board™ is designed to work with 3.3V only. When using it with MCUs that use 5V levels for their communication, a proper level translation circuit should be used.