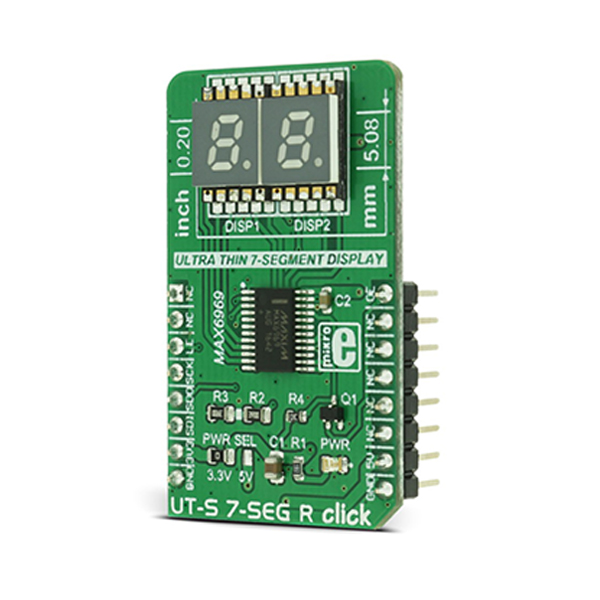 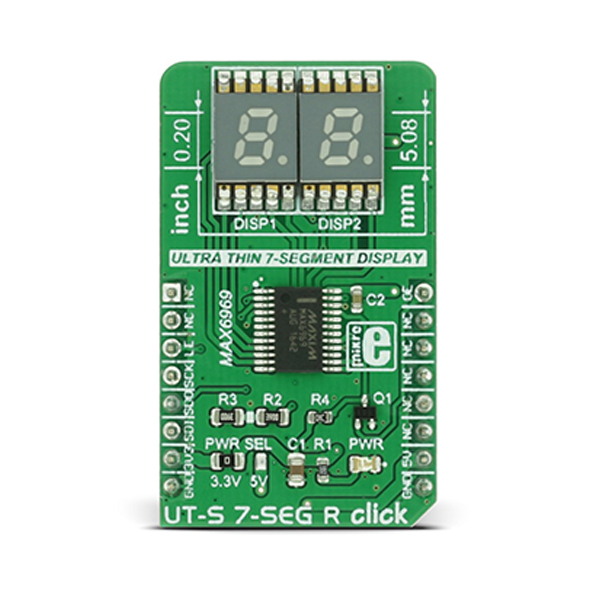 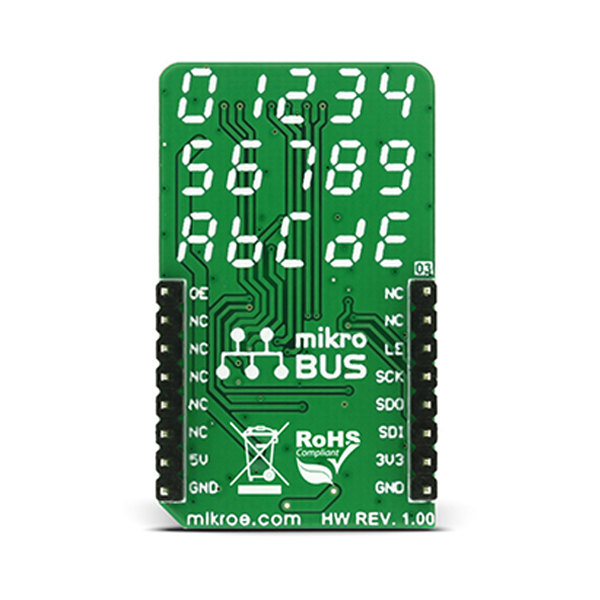 7-segment LED display is the most commonly used type of display to represent changing numerical values. The principle is very simple - seven LED segments are positioned in a certain shape and by turning specific segments on or off, the shape that resembles a specific number is lit. This method of displaying numbers was first used in the beginning of the 20th century, but after the invention of the LED in ‘70, it is the most commonly used method to display numbers. It utilizes a fairly simple and cheap design with the numbers clearly visible. Be it a clock on the nightstand, a billboard at the airport, a gauge on some machine, a panel on some instrument or a display on the pump at the gas station - the numbers will be always easy to see and read, even in the dark.

UT-S 7 SEG R Click uses two SMD ultra-thin DSM7UA20101 7-SEG LED displays, made with the patented technology that delivers thickness of only 2.1 mm. Those displays are driven by the MAX6969, a constant current LED integrated driver from Analog Devices, which uses the SPI serial interface for communication and delivers steady and constant power source for the LED segments.

The UT-S 7 SEG R drives two LED seven segment displays with the MAX6969, a LED driver integrated circuit, built to drive this kind of displays. The current through the segments is set as constant, by the resistor connected between the GND and the SET pin of the IC. In this case, it is kept at around 23 mA, as per segment requirements. The Click can work with both 3.3V and 5V, selectable by the PWR SEL jumper.

The Click uses the SPI communication lines. The data received via the SPI serial interface is kept inside the internal serial-to-parallel shift register. The reading process happens when the LE (load enable) pin is set to the logic HIGH state. When the LE pin of the Click is altered to a logic LOW state, the content of the serial-to-parallel shift register is shifted to the sixteen output latches. The latches are connected to the output pins - from OUT0 to OUT15 respectively, driving the LED segments of the two 7 SEG displays.

Outputs can be additionally turned off and on by the OE pin of the Click, routed to the #OE pin of the MAX6969 IC itself. The signal is inverted by the means of the additional NPN transistor, so the logic LOW state of the OE pin will turn off the outputs, regardless of the inverted nature of the #OE pin on the IC itself. The state change on OE pin will not alter the content of the latches, so it can be used to dim the LED segments by applying the PWM signal. For this reason, the OE pin is routed to the PWM pin of the mikroBUS™.

The serial data is also sent out via the SDO pin of the Click during the rising edge of the CLK (clock) signal, so daisy chaining of several devices is also possible.

Libraries supported with this Click allow for an easy implementation in the code and the included example demonstrates the functionality of the Click, using the functions that these libraries provide. The example can also be used as a reference or a starting point for any custom application design.