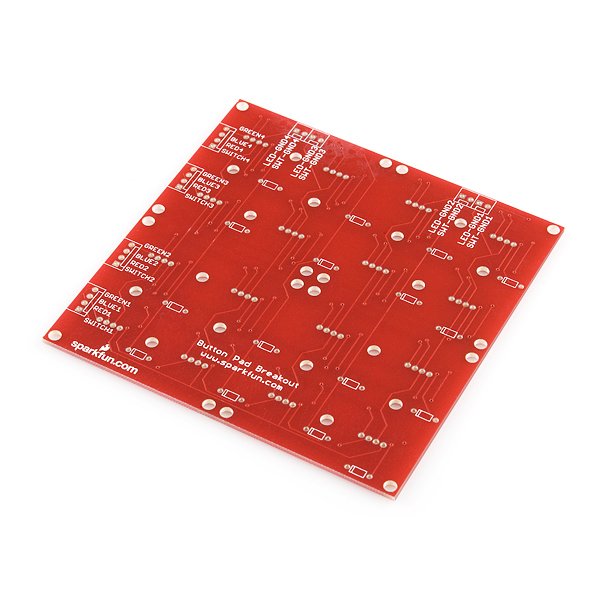 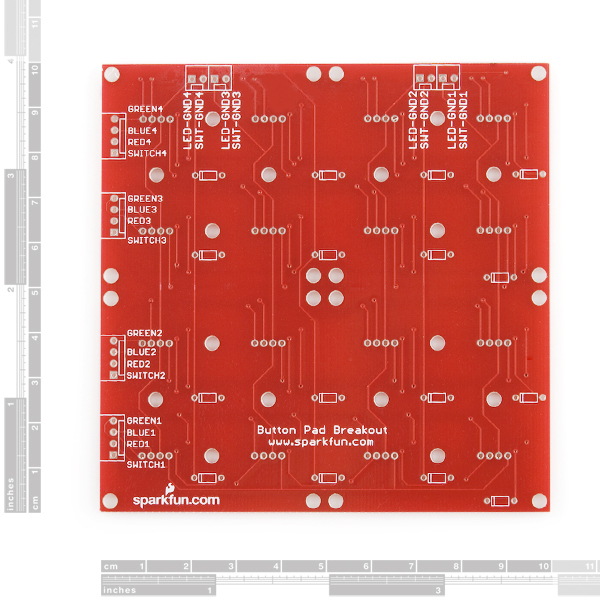 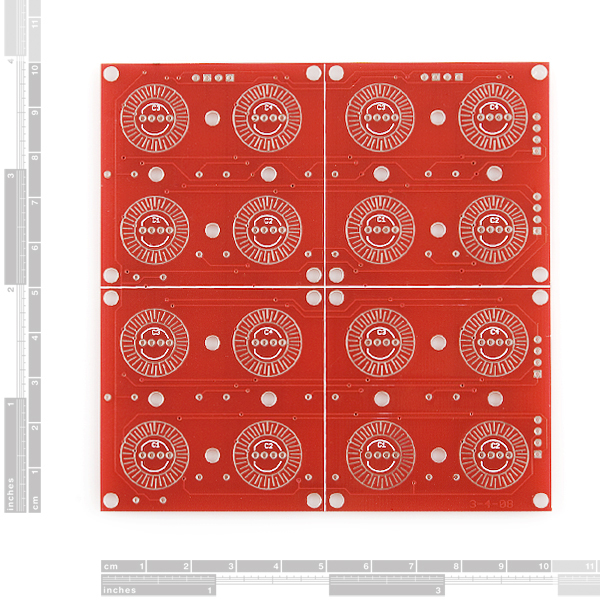 This a simple breakout PCB for our 4x4 silicone button pads. Each LED and button can brought out to the side connectors. The connectors are soldered to the back side of the PCB. We recommend trimming the connector leads on the button side as short as possible to reduce the deflection of the pad.

Now with footprints for diodes! Use the super cheap 1N4148 through-hole diodes. These can be used to isolate the switches to make for a bit easier decoding.

about 5 years ago by Member #430122 verified purchaser

This breakout board uses a matrix type control system for the LEDs and switches. It's a good way to deal with a lot of I/O, but the board has very poor scaling for LED brightness.

Also note that with this configuration, some lighting combinations are not possible, and the method used in this link will have to be used: http://www.learnerswings.com/2014/08/theory-of-controlling-diagonal-leds-of.html .

Current is shared between each row of LEDs, and that is a really bad thing when picking current-limiting resistors. Either the current will be too high and blow an LED, or the current will be too low when more LEDs are lit. This board will never be able to control the LED colors well, nor will it look good at all (which is what this button layout is for, anyway).

I'm sure that the idea behind this board was that current-limiting resistors would not be needed with internal pull-ups, but running 16 RGB LEDs (48 total LEDs) from GPIO power without some kind of driver is a really, really dumb thing to do.

If this board had resistor footprints for each LED anode, it would be worth it, but in this state, it's a waste of money. Just go and have another PCB printed, rather than find that this doesn't work, and have to print one anyway. $10 is a very high asking price for something this poorly thought out. I would only ever recommend this for projects that will always have a set number of LEDs on at a time.

Perfect for my application.

about 6 years ago by Member #160590 verified purchaser

I wanted a soft button and light thing I could turn into a toy for a friend's child. The adafruit version of this is too small and only supports single color LEDs. This gives me many more options. I'm very happy with it.

about 5 years ago by rsp verified purchaser

I got one of these a long time ago and never used it because the RGB LEDs are a pain to drive. The other day I pulled it out and rewired it for 5mm WS2812 LEDs. The LED footprints work fine, it just requires a lot of trace cuts and bodge wires. The result is excellent though; the buttons have a good feel and the colors look great. It would be better if this product was available for WS2812 LEDs instead of (or in addition to) RGB LEDs.

Hello, and thanks for your review. Changing to WS2812 LEDs is actually a really good idea and would greatly simplify this board as well as making it a lot easier to use. I'll pass your suggestion on to our engineering team!