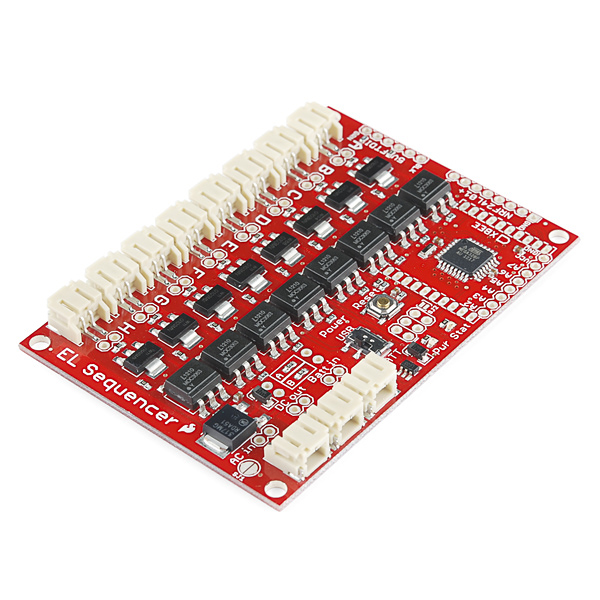 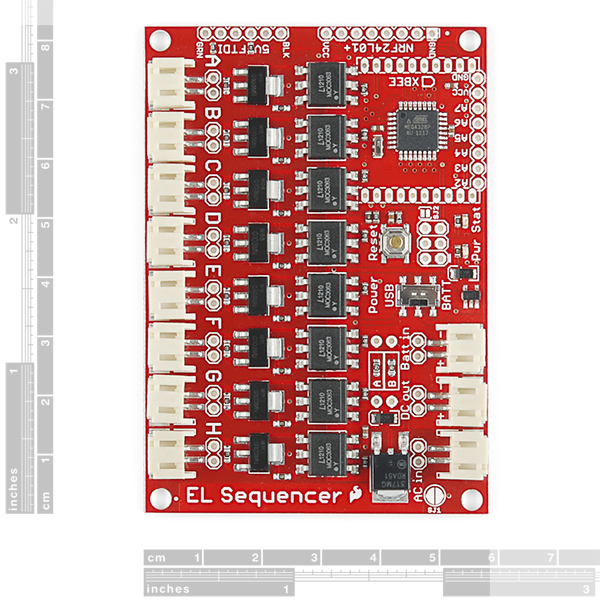 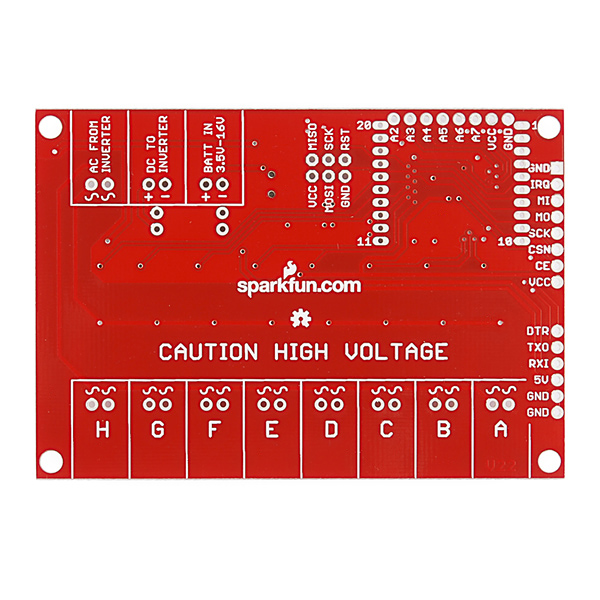 We've heard you, and made a number of improvements to our EL Sequencer. The new version adds zero-crossing optoisolated triacs for noise-free operation and full isolation between the AC and DC sides, and includes a 1.5A adjustable linear regulator to supply regulated DC to an external inverter (not included).

In addition to this board, you will need an inverter (a component that generates the high-voltage AC needed by EL wire), EL wire/tape/panels, and a 5V FTDI BOB or cable to load your own programs. The board also has headers for XBee and NRF24L01+ radio modules for wireless projects. SparkFun carries two inverters, a 3V-input version that can drive a few feet of EL wire, and a 12V-input version capable of driving dozens of feet of EL wire. Choose the one appropriate to your power source and driving requirements. See the tutorial below.

Note: The initial run of the board contains a silkscreen error; the FTDI "black" and "green" labels are reversed. If you're plugging an FTDI BOB into the board, it goes in right-side-up as you'd expect.

I was wary of this product and I still am

about 7 years ago by drewmacrae verified purchaser

The documentation on this product isn't great about how often it can switch the outputs. I don't want to burn it out, but I'd also like my display to look a bit more impressive than just cycling the lights every second.

The documentation is also very clearly written for the Escuido Dos, and while it's almost directly applicable, there are a few differences and I found I was browsing both of the schematics to try to make a good guess of which setup would work and which wouldn't.

The default code is very simple, and works to test all the outputs, but I'm definitely going to need to reprogram the chip, and given I'm just making a light-show that's a bit disappointing.

The good news is that everything wrong with this board could be fixed with a website and default code update, so this could be easily improved.

I got it working with parts only from sparkfun: this board a 12V inverter (with a JST pigtail soldered in) a JST to barrel jack converter, a 12V DC Wall wart and EL wire

Hi, Sorry for the troubles. I will be posting your comments up into a revision review request. We're always trying to improve our documentation. Maybe we can get things cleaned up a bit to help future users avoid similar issues. Thanks for the feedback!

about 6 years ago by pu241 verified purchaser

I used this board to turn on four 1M EL Tape strips in a coat closet. I used a 5 mV per gauss Allegro A1324 Hall Effect Sensor IC and a tiny magnet (COM-08644) in the door to sense door position and then progressively turn on more light the further the door opened. It works well. I did learn two things, PWM does not work well with EL and the EL inverters (COM-10469) burn out eventually (~36 months, I leave them on 24/7). I recommend the board, it makes projects like mine easy. I'd love to see a USB connector on this in the future.

Good Product, Not for beginners

about 6 years ago by Member #700730 verified purchaser

Original Assessment: I've had a number of issues with my Sequencer. A code that worked great with a Mega and a EL Dos Escudo completely fried 4m of EL tape. Not sure what the issue is. I've repaired and retested wires only for the sequencer fry it again. No clue what happens. I'm reverting back to my Dos. I talked to tech support and although they were very responsive they didn't offer much of a solution besides changing inverters. It didn't solve my problem. I originally suspected it was some sort of Voltage issue because I originally used 12V and a 9V to power the board. It was a dumb mistake but I don't think permanent damage was done. However when I try to power up really more than 1 circuit it fries the wires. So long story short I had a pretty rough experience. The El Escudo Dos is much more reliable and safe in my opinion.

After more development and research: Like a real dummy, I did not pay much attention to my inverter selection. This is a bit due to the lack of options on adafruit and sparkfun. Both sites offer similar inverters. Here on sparkfun, they offer the 12V wall wart inverter, on adafruit the more module inverters are offered in 3V and 12V. Here's where everyone planning on using this device or has plans for a large scale EL Project main speaking with EL Tape and Panel needs to pay attention. THESE INVERTERS ONLY SUPPORT UP TO 100 cm^2. That means 1m of tape or 10cmX10cm of Panel. FOR ANYTHING GREATER CHECK THIS SITE FOR HEAVY DUTY INVERTERS: www.thatscoolwire.com. I used the Powerhouse inverter to light up over 700cm^2 of EL Panel and Wire without destroying it all. (For projects using EL Wire these sites offer great inverter and I promote their use.) NOTE: If you use the other inverters with more than the suggested amount you're playing a risky game. The inverter will start to experience voltage spikes and it will likely burn out all your EL product.

So more about the product, if you have done you research and have all the right equipment, this is an awesome product. That being said documentation and warnings like these are not as present as they should be. My best advice for this product: get the correct inverter, test slowly to protect your wires, once confident in your design go for the goal, the product can likely take it if you've done good research and have all the right components for your system.